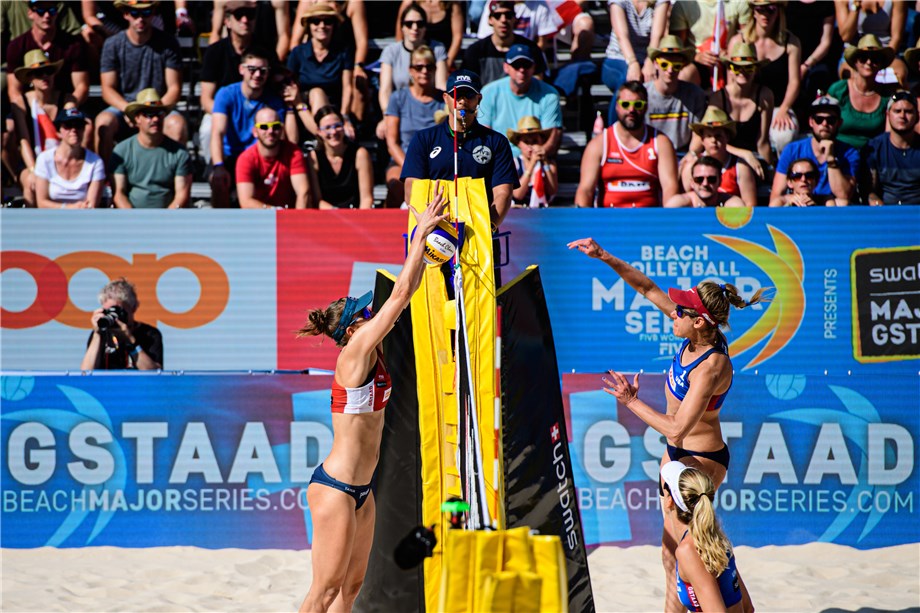 American April Ross (center) hits against Tanja Huberli of Switzerland in the women's semi-finals at the Swatch Major Gstaad Sunday.

Gstaad, Switzerland, July 10, 2019 - With the Swatch Major Gstaad being the 407th women's FIVB World Tour event since the start of competition in 1992, the gold medal match here Sunday afternoon will be the 100th between the two countries on the international beach volleyball circuit.
Quick links - Beach volleyball:
FIVB Beach Volleyball World Tour - Gstaad, Switzerland
FIVB World Tour - Daegu, Korea
FIVB World Tour - Alba Adriatica, Italy.
FIVB.com - Beach volleyball
Facebook
Twitter
Instagram
The gold medal meeting was set up Sunday morning when third-seeded Alix Klineman and April Ross rallied from a seven-point (18-11) deficit in the first set to post a 2-0 (22-20, 21-17) semi-final win in 43 minutes over top-seeded Nina Betschart/Tanja Huberli of Switzerland.
“We didn’t start the way we would have liked,” said Ross, who be playing in her second Gstaad finale after losing with Kerri Walsh Jennings to Talita Antunes and Larissa Franca of Brazil in 2016.  “I’m proud that we didn’t give up and hopefully the game will wake us up a little.”
With their fourth-straight win in the Swatch Major Gstaad elimination bracket, Klineman and Ross will meet 15th-seeded qualifiers Maria Antonelli/Carolina Salgado of Brazil in the gold medal match.  Antonelli/Carolina Salgado posted a 2-0 (21-16, 21-16) semi-final win in 37 minutes over fifth-seeded compatriots Ana Patricia Silva/Rebecca Cavalcanti. 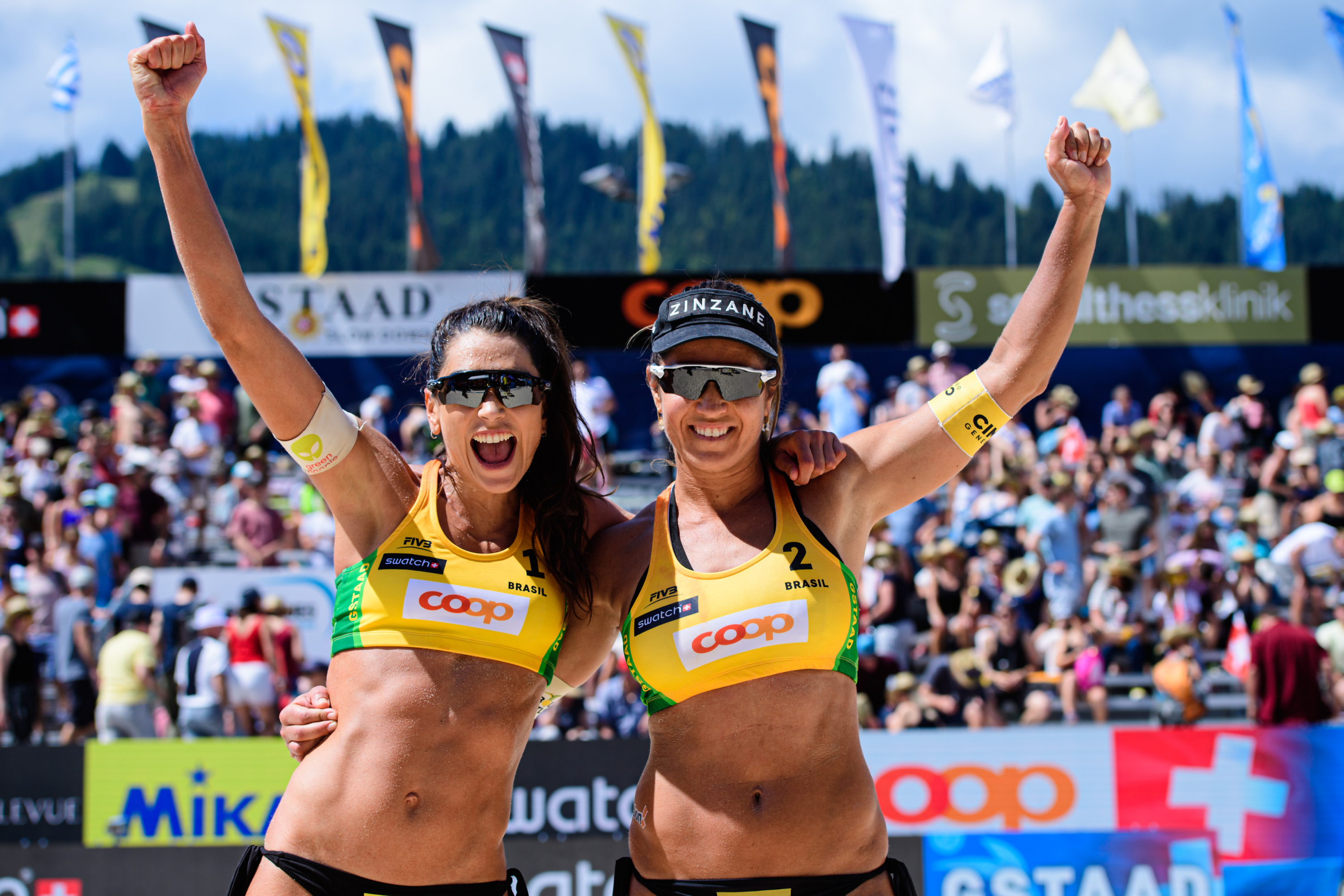 Carolina Salgado (left) and Maria Antonelli after winning an all-Brazilian semi-final in Gstaad Sunday.
The Americans have won 54 of the previous 99 gold medal meetings between the two countries with each country posting a title victory this season in events at China and The Netherlands.  Seven of the Brazil-USA gold medal meetings have been played in Gstaad with the North Americans winning four times.
Ana Patricia and Rebecca were involved with both after losing to Klineman and Ross October 14 in Yangzhou China and defeating Kelly Claes and Sarah Sponcil January 6 in The Hague.
With Klineman and Ross leading the FIVB World Tour series between the two teams, the Americans posted a 2-1 (21-15, 23-21, 15-11) elimination bracket win in 47 minutes last week at the world championships in Hamburg, Germany.  The two teams met for a World Tour gold medal in January 2017 with Klineman and Ross winning in two sets at The Hague.
Both finalists have won women’s FIVB World Tour gold medals with Klineman and Ross’s second and third titles coming this season at events in China and Brazil.  Antonelli and Salgado’s only gold medal was in June 2017 at The Hague when the Brazilians defeated a team from Switzerland in the finals.