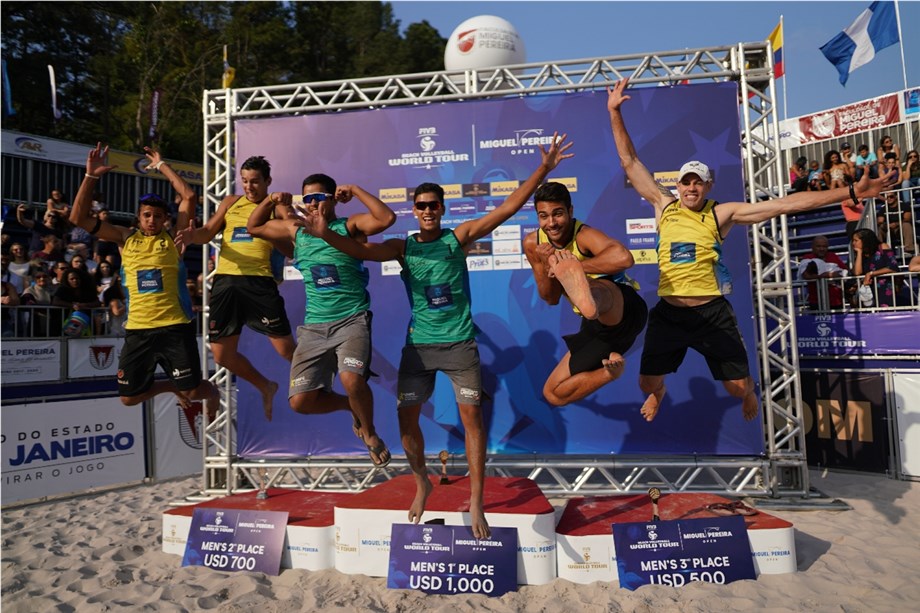 Miguel Pereira, Brazil, August 11, 2019 – 19-year-old Brazilian twin brothers Renato Andrew Lima de Carvalho & Rafael Andrew Lima de Carvalho triumphed with the men’s title at the Miguel Pereira one-star stop on the 2019 FIVB Beach Volleyball World Tour. This way, at their debut appearance on the Tour, they kept the tradition to win gold at all FIVB events any of the two has played at. So far, Renato has claimed three crowns at age-category world championships, the last one, at the 2019 U21 World Championship, in partnership with his brother Rafael. 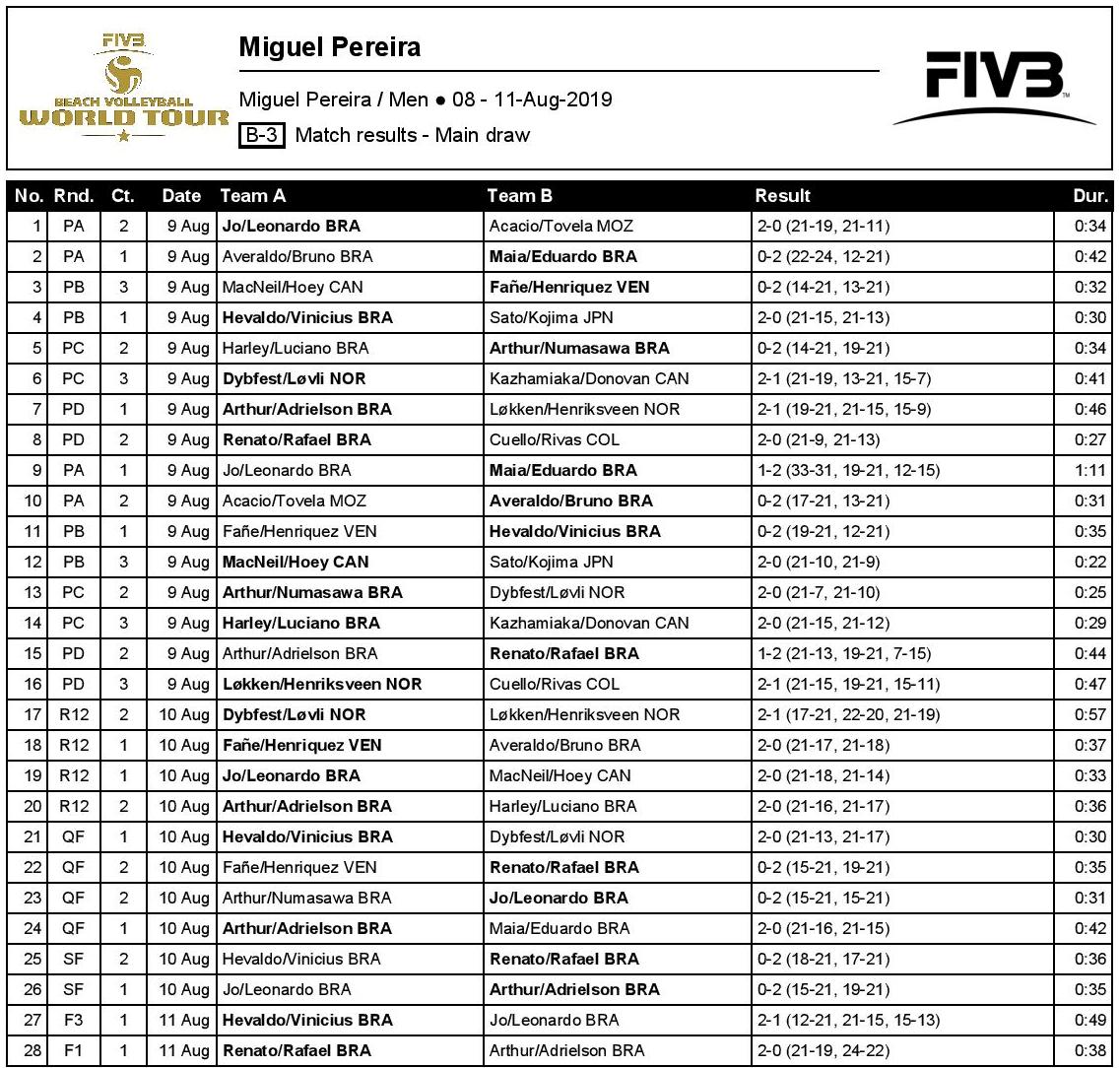 The other spots on the podium also went to Brazilian pairs. Fourth-seeded Arthur Diego Mariano Lanci & Adrielson Dos Santos Silva took the silver, their first World Tour medal. 23-year-old Arthur was U19 world champion in 2014 and U21 world championship in 2016, while 22-year-old Adrielson has the title of the 2017 U21 World Championship to his name (in partnership with Renato).
Seventh-seeded wild cards Hevaldo Sabino Moreira & Vinicius Rezende Costa Freitas won the bronze. For 24-year-old Vinicius, who triumphed with the gold at last year’s edition of the Miguel Pereira one-star, this is the second World Tour podium, while for his well-seasoned 40-year-old partner it is the first ever medal on the Tour.
The first half of the first set in the gold medal match was very competitive and tight. After that Renato & Rafael, seeded fifth in the tournament, opened up a slight lead and managed to maintain it through the end – 21-19, shaped up with a successful hit by Rafael for the last point. Arthur & Adrielson stormed into the second set with a 3-0 lead, extending it to 5-1. The twin brothers recovered to catch up at 10-10 and prompt an exciting epilogue. The lead changed hands several times and the epic battle went into overtime. Finally Renato aced to put an end to it all for a 2-0 (21-19, 24-22) victory.
“It is always difficult to play against Arthur & Adrielson. With that in mind, we have entered very focused on not giving them any space. It is incredible to win here at Miguel Pereira alongside my brother and I am very happy to give our dad this gift for Father’s Day,” said Rafael.
“We are in a good sequence – U21 world champions and now gold on the World Tour,” commented Renato. “We owe this to all the work we put in at C.T. Cangaco in Joao Pessoa and the coaches, who help us keep evolving.”
Top-seeded Joalisson Laurindo Gomes & Leonardo Gomes Vieira, also of Brazil, stormed into the bronze medal game against Hevaldo & Vinicius with a 5-0 shocker and stayed well in control of the rest of the first set. Jo delivered set point with a monster block and Leonardo closed it off with a short cross-court hit that put the ball on the sand for 21-12. Hevaldo & Vinicius reacted by dominating the second set. After taking an early lead, they fought off the opponents’ attempts to catch up and levelled the match after a 21-15 win. The tie-breaker was a fierce battle for every point. After 9-7 Jo & Leonardo’s way, Hevaldo & Vinicius scored four in a row to take an 11-9 lead and never allowed the opponents to catch up again. A sharp spike by Hevaldo stopped the clocks at 15-13.
“I am really happy, more about the synergy that we conquered here than even about the bronze itself. It is our first competition and I see a great future for us,” stated Hevaldo.
“We knew that the match was going to be very tough because we faced an experienced and victorious team,” Vinicius added. “We also had to deal with the semifinal loss, but at the end we helped each other and everything went well.”
Quick links - Beach volleyball:
FIVB Beach Volleyball World Tour - Miguel Pereira
Facebook
Twitter
Instagram