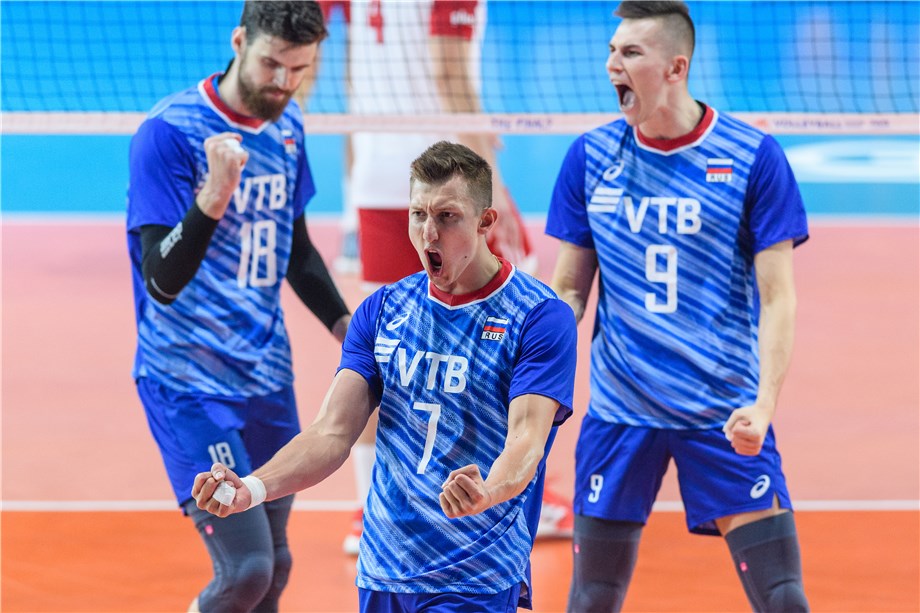 Lausanne, Switzerland, August 31, 2020 - From Canada's Calgary in the north and west to Japan's Kyoto in the east and Argentina's San Juan in the south, cities across the globe are getting ready to host the 2021 FIVB Volleyball Nations League as the competition returns to inspire volleyball fans the world over.
The 2021 VNL is set to start on May 11 for the women and May 14 for the men, retaining the format of previous seasons. The 16 teams per gender will meet in four-team pools over five weeks, to determine the top six that will then fight it out for the titles.
FIVB Volleyball Nations League 2021 – Full Match Schedule
The venues for the final rounds remain to be confirmed, with the Women's Finals set to be held in China and the Men’s Finals in Italy, both from June 23 to 27. That will bring the season to a climax ahead of the Tokyo 2020 Olympic Games, now scheduled for July 23 to August 8.
Men's defending champions Russia, aiming for their third title in as many editions of the event since its introduction in 2018, will begin their quest at Jiangmen alongside hosts China, Iran and Japan over the first week of competition from May 14 to 16. 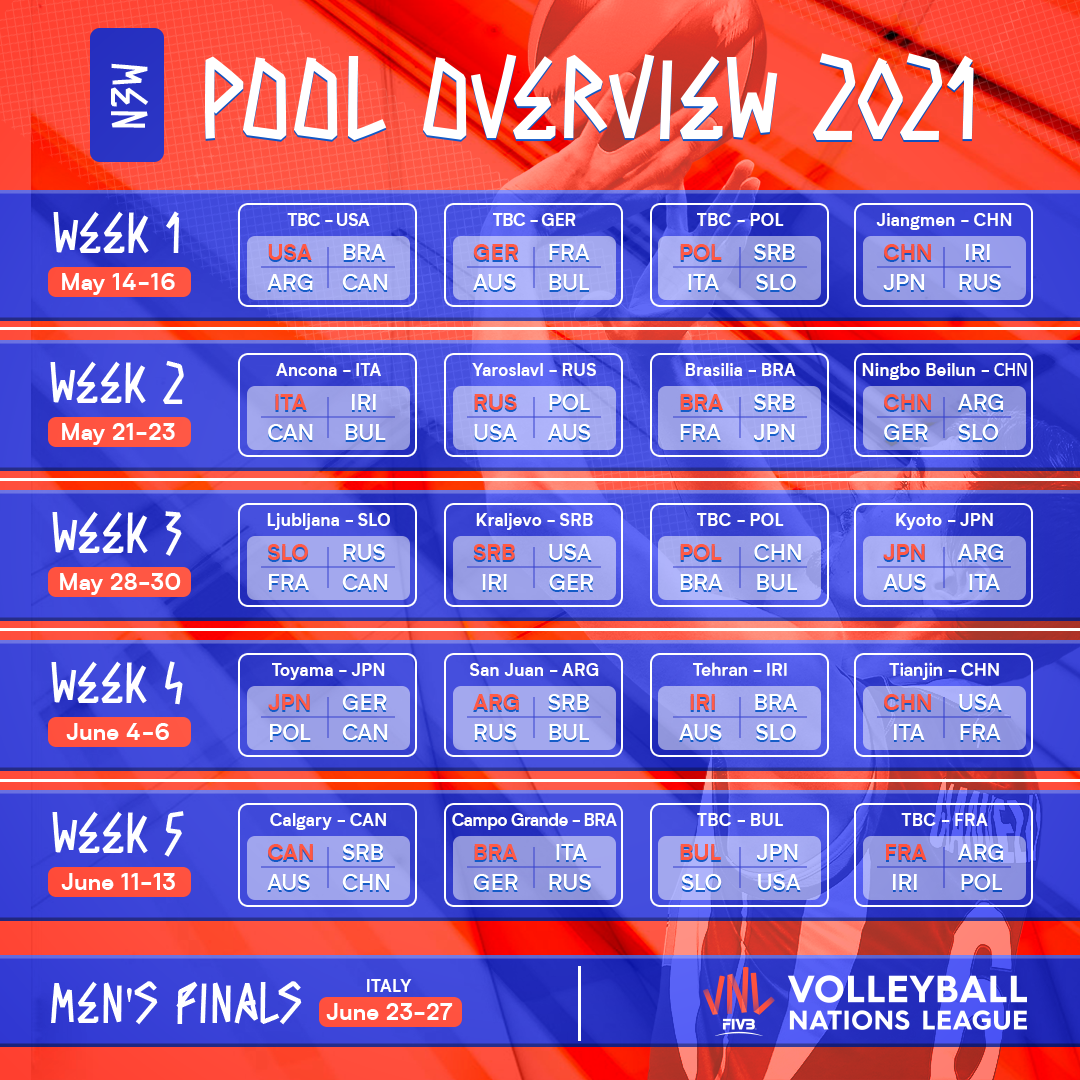 Reigning world champions Poland start off at home, hosting Serbia, Italy and Slovenia in the first week and reigning Olympic champions Brazil play their first week in the United States where the hosts also entertain Argentina and Canada.
The women's defending champions USA will also be looking at a third back-to-back title when they embark on the road to the finals from the Cuiaba pool, from May 11 to 13, against hosts Brazil, Canada and the Dominican Republic. The clash between Brazil and USA on this opening week will be a rematch of the 2019 final, in which the North Americans prevailed in five dramatic sets to win the title. 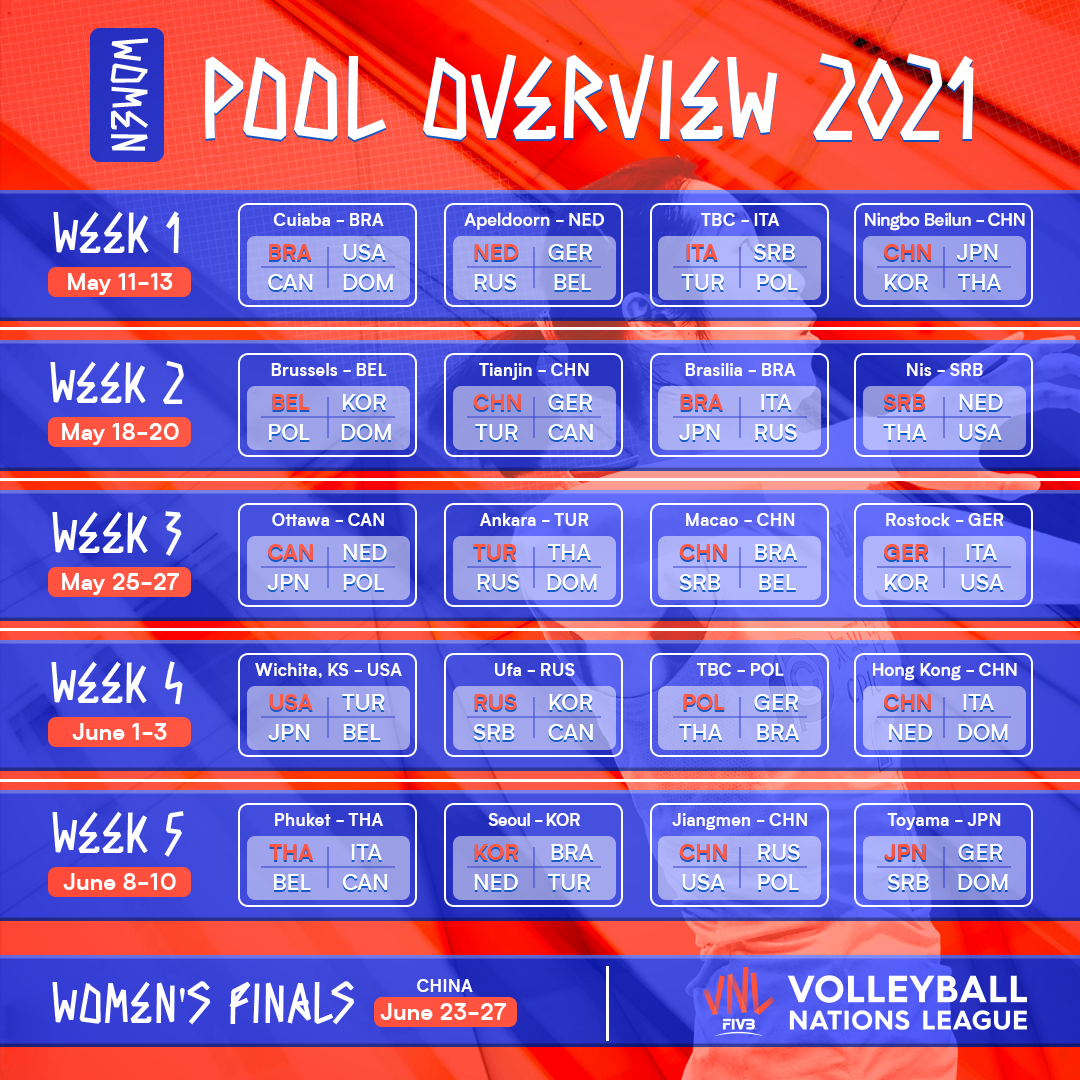 Reigning women's world champions Serbia travel to Italy for the opening week against the hosts, Turkey and Poland, while reigning Olympic champions China (hosts of the VNL finals for a third season running) welcome Japan, Korea and Thailand in Ningbo.
The 2021 VNL will be the third edition of the event, after the cancellation of the 2020 competition due to the coronavirus pandemic.