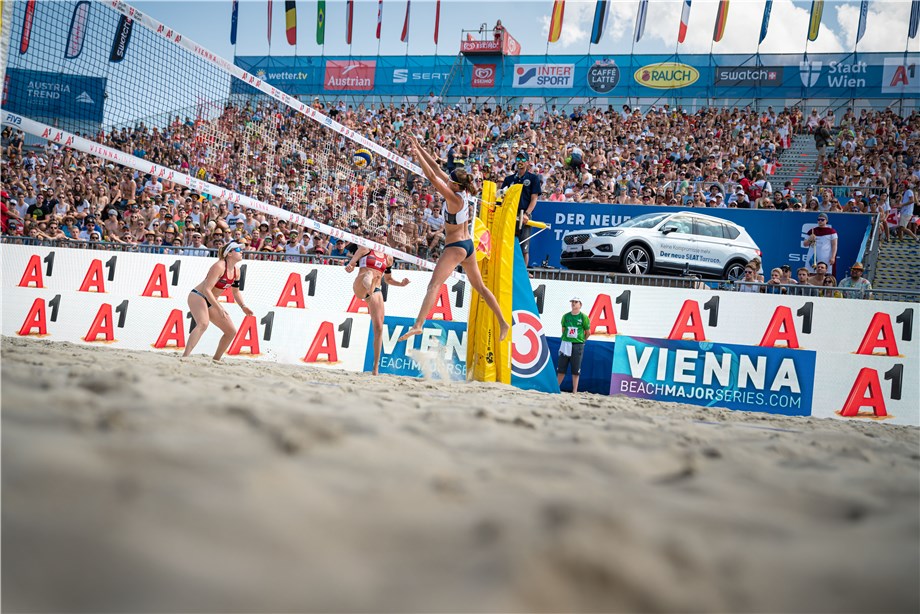 Vienna, Austria, August 2, 2019 - Led by Brazil with three men's and five women's team remaining in the competition, 40 beach volleyball pairs from 17 countries are still in contention for the gold medals here Friday at the US$600,000 A1 Major Vienna presented by Swatch.
Quick links - Beach volleyball:
FIVB Beach Volleyball World Tour - Vienna
Facebook
Twitter
Instagram
More than 10,000 fans watched center court action Thursday where the women played one round of elimination and the men completed 32 pool play matches on  The Donauinsel, a long, narrow island lying between the Danube river and the parallel excavated channel Neue Donau.
The women's schedule Friday with feature 12 matches highlighted by the afternoon quarter-final contests that will set the program for Saturday's semi-finals and medal meetings where the final two pairs will compete for the $40,00 first-place prize and 1,200 Olympic qualifying points for Tokyo 2020.
For the men, 16 matches will be staged Friday to finalize the program for Saturday's quarter-finals at the FIVB World Tour tournament.  The men's final four matches will be played Sunday. 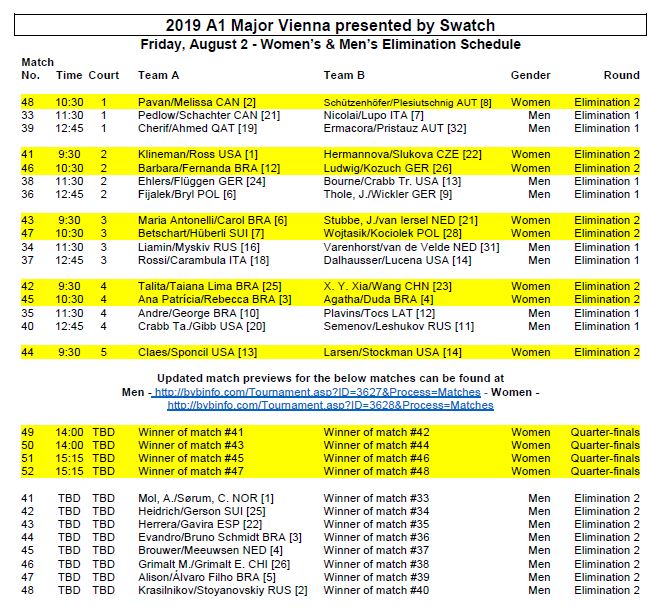 The 2018 A1 Major Vienna champions Anders Mol/Christian Sorum of Norway and Barbora Hermannova/Marketa Slukova of the Czech Republic are still in contention to defend their gold medals along with three of the four other podium placing teams for last year's event.
The Czech Republic pair will be the first defending champion to play Friday as the 22nd-seeded Hermannova and Slukova challenge top-seeded Alix Klineman/April Ross of the United States at 9:30 a.m. (local time).
Barbara Seixas and Fernanda Alves, who dropped the 2018 Vienna gold medal match to Hermannova and Slukova, will also be playing as the 12th-seeded Brazilians meet 26th-seeded qualifiers Margareta Kozuch/Laura Ludwig of Germany at 10:30 a.m. Friday.
Joining the top-seeded Mol and Sorum in the men's elimination rounds are 2019 medal winners Michal Bryl/Grzegorz Fijalek of Poland (silver) and Cherif Samba/Ahmed Tijan of Qatar (bronze).  Both teams play Round of 24 matches at 12:45 p.m. (local time) Friday.
With the Norwegians earning a bye into the second round of elimination after winning their pool Thursday, the sixth-seeded Bryl and Fijalek meet ninth-seeded Julius Thole/Clemens Wickler of Germany and the 19th-seeded Samba and Tijan being challenged by 32nd-seeded Martin Ermacora/Moritz Pristauz-Telsnigg of Austria.