After eight years of publishing weekly, Haikyu!! ends its run

Lausanne, Switzerland, July 28, 2020 – When the double edition of the Weekly Shonen Jump magazine went on sale on July 20, the popular volleyball manga series Haikyu!! ended its weekly publication after eight years and five months.
In that time, Haikyu!! had 402 chapters published, all of which followed the Karasuno High School boys’ volleyball team and its players.
Haruichi Furudate, the creator of Haikyu!! had played volleyball growing up and had wanted to create a manga based on the sport. When looking at other Japanese volleyball manga, Haikyu!! has probably been the most successful of all.
At first Haikyu!! was just drawn as a story which was about the main character, a red-haired short boy named Shoyo Hinata.
Hinata went to a middle school where none of the other students were interested in playing volleyball. Hinata, however, fell in love with the sport when he was younger while watching Karasuno make a run to the Japanese National High School Championship.
One of Karasuno’s players at the time was called the Little Giant, which given Hinata’s height made him his favourite player. One day, Hinata is told at his middle school to meet others around town who play volleyball to learn how to play. He makes many friends through the sport and eventually gathers enough people for his team to participate in a middle school tournament. During the competition, he meets a rival, who eventually becomes a teammate, Tobio Kageyama.
Kageyama’s team dominates Hinata’s team in the middle school tournament. But when entering Karasuno High School, which neither knew the other was going to attend, both join the boys’ volleyball team practice and ask each other, “Why are you here?”

The question is answered throughout the entire series in two ways, they love the sport and they want to win. However, sometimes to win, you must fail. Hinata loves volleyball, but his technique is inefficient, and he has never really learned playing systems and strategy. Kageyama has learned those earlier as he has played more, but struggled to work with teammates in the past and sometimes caused his team to lose. Even though both were rookies to the high school team, their teammates soon realized that without them, Karasuno would not be a stronger team.
Karasuno, also known as the Crows due to the word karasu meaning crow, were a successful prefectural team in the past, reaching the National High School championship. However, when Hinata and Kageyama joined the team, they were not as strong as they had been.
Still, the veteran players for the school had some experience and skill and with a little help and guidance could possibly be competitive in the prefecture. In many prefectures in Japan, there is only one team that can reach the National Championships. But there are several strong teams to face in the prefectural tournament. Karasuno does all it can to overcome those local teams and their players to reach the national tournament.
Furudate, who created the Haikyu!! series, does a great job of creating spaces for the characters to fit into the story.
What about the pinch server coming off the bench, who is also a rookie with the team? Can he build his confidence to perform in a match? What about the libero, who is facing a tough server or spiker? Can he change his technique to succeed? Can the head coach, who has never coached before, but was a Karasuno player during the glory years, succeed against other more experienced coaches? Even the female team manager who does not know volleyball, can she learn the sport and fit in to the team?
Just like playing on a team, Furudate explores the relationships between people. What is funny to one may not be to others, or where are people trusted the most? These interactions really give the series a genuine feel and emotion.
Furudate even explains some of the uniqueness of volleyball to those who are not used to the strategy of volleyball. Such as when a team focuses on triple blocks, there will be a hole somewhere in the defence for the offense to target. Can teams adjust in the middle of the match? Additionally, the serving substitution of a setter in the backrow, to enable a front row setter to swing as an attacker - it in not often used in the international game, but it is an option. Also, Furudate explains the importance of a strong player going into the back row, which changes how an opposing team will attack against them. These small details that Furudate points out make Haikyu!!a great vehicle to show the sport of volleyball to not just volleyball fans but to those outside the sport.
Haikyu has been phenomenally successful and has been converted into four televised animation programs, Haikyu!!, Haikyu!! Second Season, Haikyu!! Karasuno vs. Shiratorizawa Gakuen and Haikyu!! To the Top.
Haikyu!! To the Top was profiled earlier this year and just recently finished the first half of a two-half run. The second-half run of Haikyu!! To the Top will be broadcast on Mainichi Broadcasting System (MBS) and Tokyo Broadcasting System (TBS) in October.
Haïk un!! was also converted into a live action play that had numerous short runs since 2015 across Japan. With the coronavirus stopping their performances this year, 98 actors created a keep-the-ball-moving video based on many of the movements in the animation during the lockdown. The completed video was released on June 18, 2020. 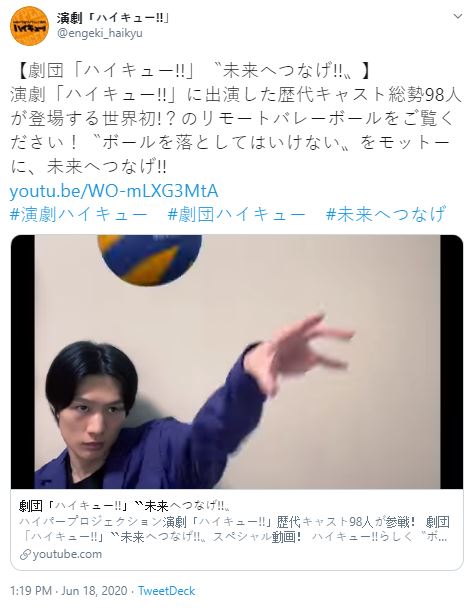 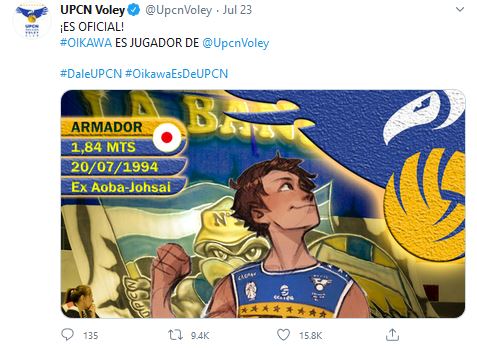 UPCN is also having an Oikawa jersey give away through Twitter.

The Japanese V.League is also set to have a special exhibition match as part of a collaboration, which the V.League has done multiple times with Haikyu!!. It will be broadcast as a “remote match” on August 16 without a crowd due to the coronavirus. Players from all V1 men’s teams will participate in the Schweiden Adlers (Kageyama’s team) vs. MSBY Black Jackal (Hinata’s team) match. No announcement has been made on the players participating or which team they will be playing on. 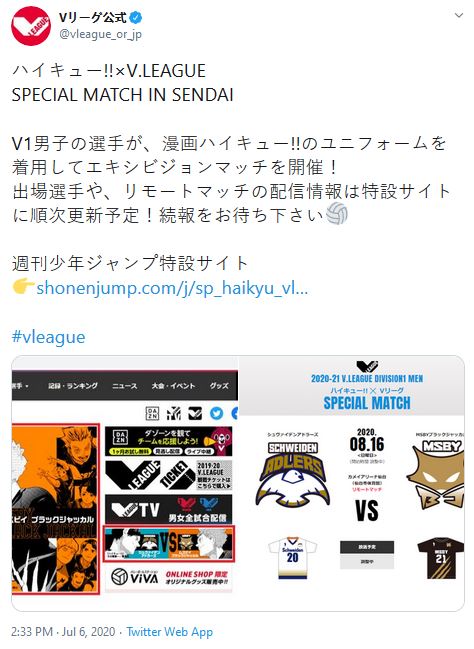 For those who follow Haikyu!! we will not give away the ending to the final chapter of its eight-year-long run. However, we will say that one of the main themes through the story is the connection of volleyball and people. Numerous times the characters interact with people from outside of their team. Sometimes it is in competition, but many times it is through practice matches and learning new skills from others. So even if teams do face each other again down the line, one thing that is sure is that they are looking forward to it as friends, but also sometimes as rivals. This interaction of teammates, friends and coaches enables the sport to live in the present and allows us to look at our growth as we get older.
Thank you, Haruichi Furudate for giving your love of volleyball to the world through Haikyu!!.