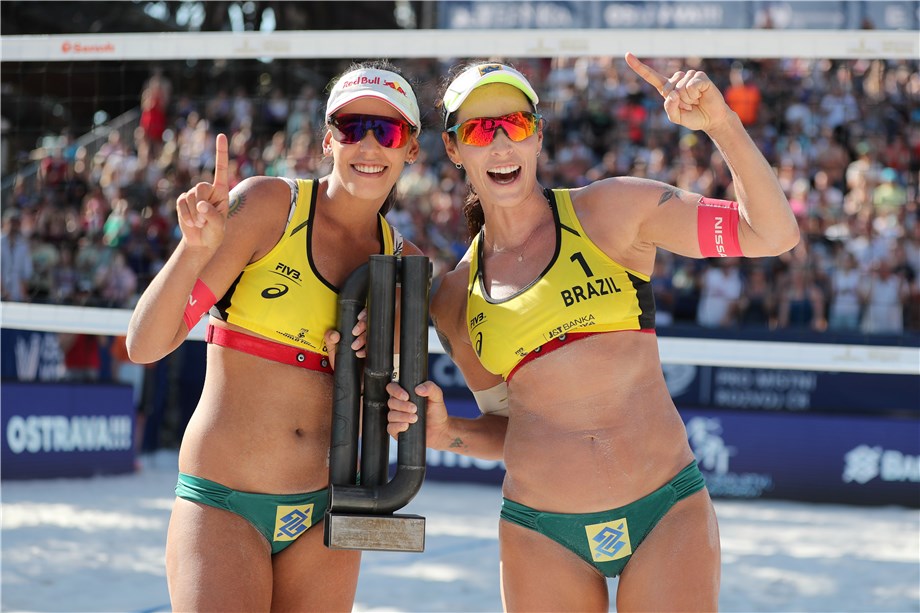 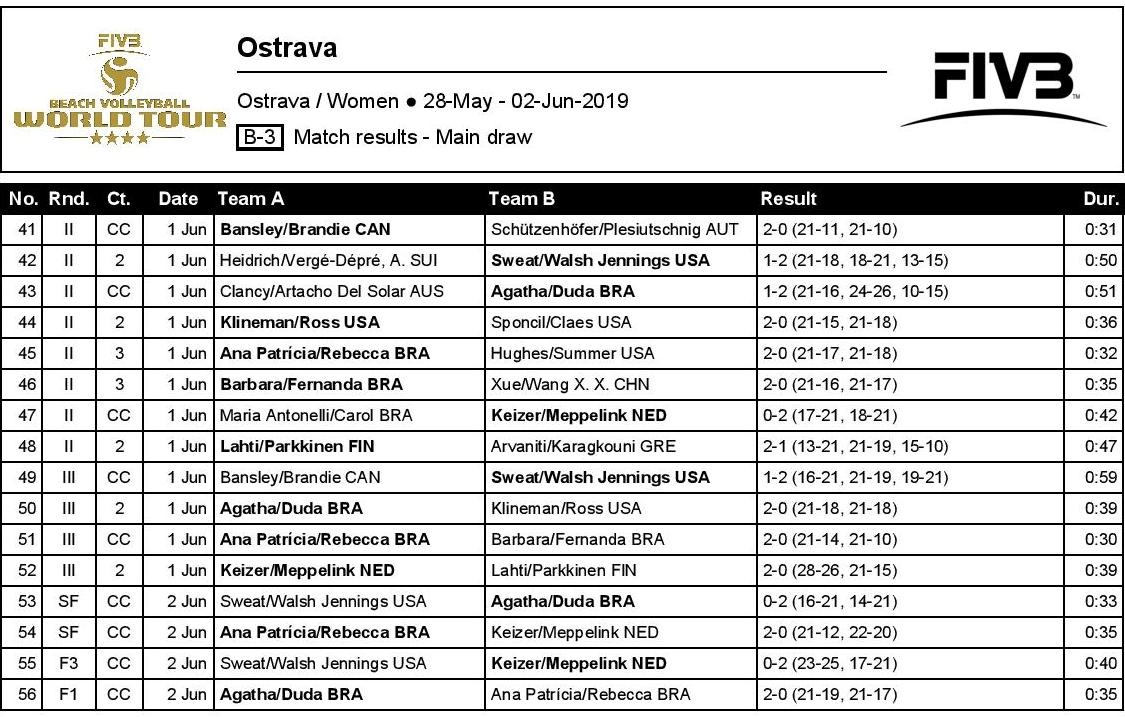 Their compatriots Ana Patricia Silva Ramos & Rebecca Cavalcanti Barbosa Silva, seeded third in the main draw bracket, had to settle for silver, but for them it was a step up from last week’s bronze at Jinjiang. For the team of 20-year-old Ana Patricia, who also won the 2014 Youth Olympic title and two U21 World Championship titles, together with Duda, and her current partner Rebecca, this is the sixth World Tour medal. Previously, they had three gold, one silver and one bronze to their names.
The bronze went to seventh-seeded Sanne Keizer & Madelein Meppelink. This is their third World Tour medal together after these two experienced Dutch players joined forces in 2018. They also got bronze at the 2018 Vienna five-star and silver at the 2018 Mersin three-star. 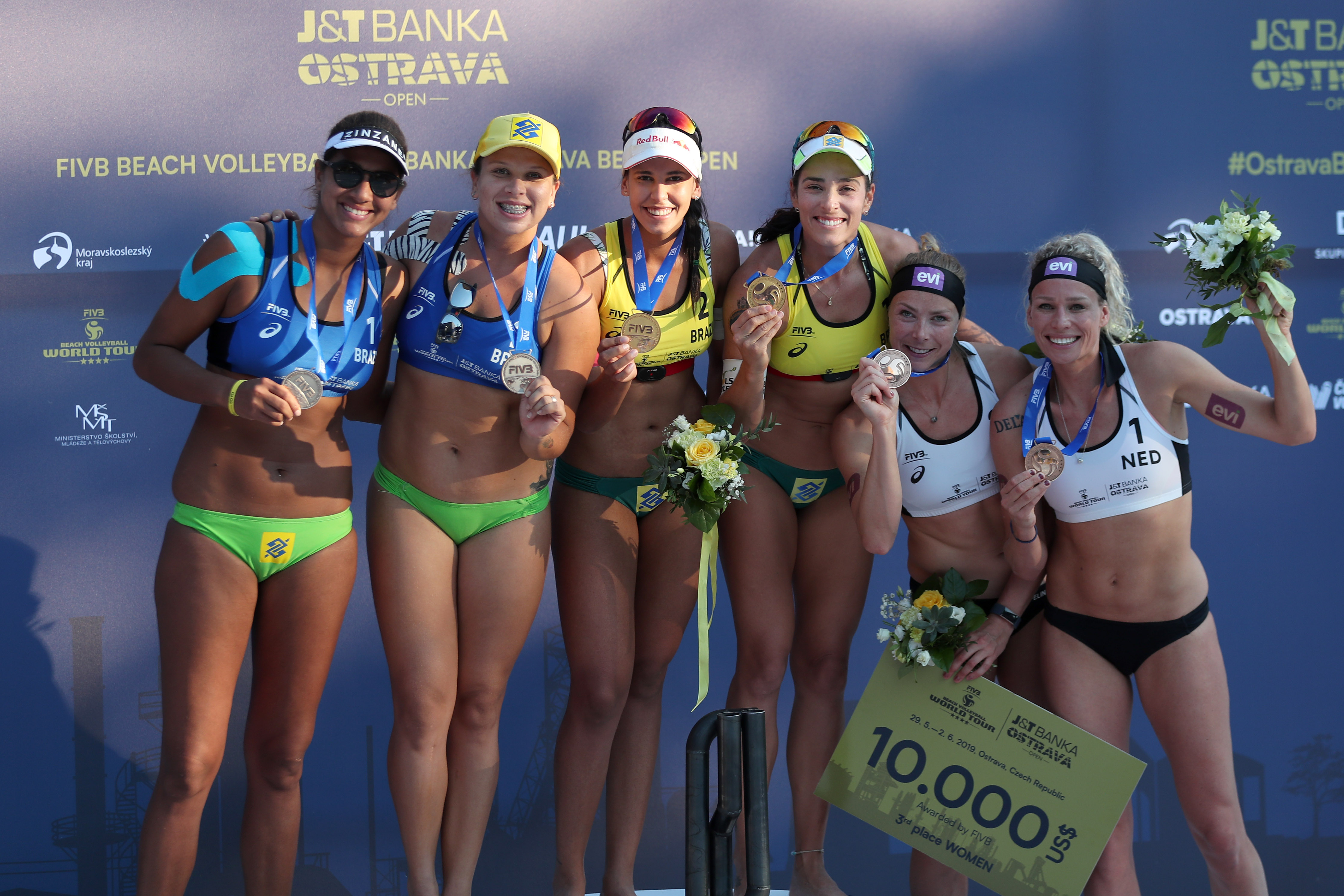 The women’s podium at Ostrava
In a nip-and-tuck first set of the gold medal match, the lead went back and forth with neither side able to break away by more than two points. Finally it was Agatha who tipped the ball over the opponents’ block to close it by the narrowest of margins. Fifth-seeded Agatha & Duda managed an early 7-2 lead in the second set and then just kept pace towards the 2-0 (21-19, 21-17) victory to triumph with the unique industrial-style trophy to match the style of the venue, handed to them by Marek Pakosta, President of the Czech federation.
“Last year I saw the girls from Czechia win this trophy here and I said to myself, ‘oh, this is so beautiful!’ And now I am holding it!” exclaimed an elated Agatha immediately after the final. “We needed all the concentration and focus to come back strong after we lost a game on the first day. We had a hard way to this final. On our way, we had Australian girls, American girls, then more American girls, and now Brazilian girls, so it took all our strength to win this first place.”
“We are very happy with the second place,” Ana Patricia said. “Last year we lost our country quota game here and this year we reached the final! Now we go back home and just train more and more and more...”
USA’s Brooke Sweat & Kerri Walsh Jennings served for the first set in the bronze medal match four times before Madelein Meppelink finally aced twice in a row to tilt the outcome in favour of the Dutch. Keizer & Meppelink took control of the scoreboard in the second half of the second set and capitalized it into a 2-0 (25-23, 21-17) win and a spot on the podium.
“We had a really tough time getting here and the last tournaments didn’t go as we wanted, but we trusted the team and it got us here,” two-time Olympian (2012, 2016) Meppelink said after the game.
“The third place match was another chance for us to perform on the centre court, so we took it positively. It was not fun to lose our semifinal because we came here to play for gold, but bronze is fine. I love it,” 2012 Olympian Keizer added.
Ana Patricia & Rebecca dominated the first set of their semifinal encounter with Keizer & Meppelink, but in the second the Dutch ran off with a 19-16 lead. The Brazilians scored four in a row with Ana Patricia serving to reach match point. Seconds later Rebecca put away two balls to fix the final 2-0 (21-12, 22-20).
In the earlier semifinal, Agatha & Duda cruised to the victory winning both sets against Sweat & Walsh Jennings by a wide margin – 2-0 (21-16, 21-14).
Quick links - Beach volleyball:
FIVB Beach Volleyball World Tour - OstravaFIVB.com - Beach volleyballFacebookTwitterInstagram