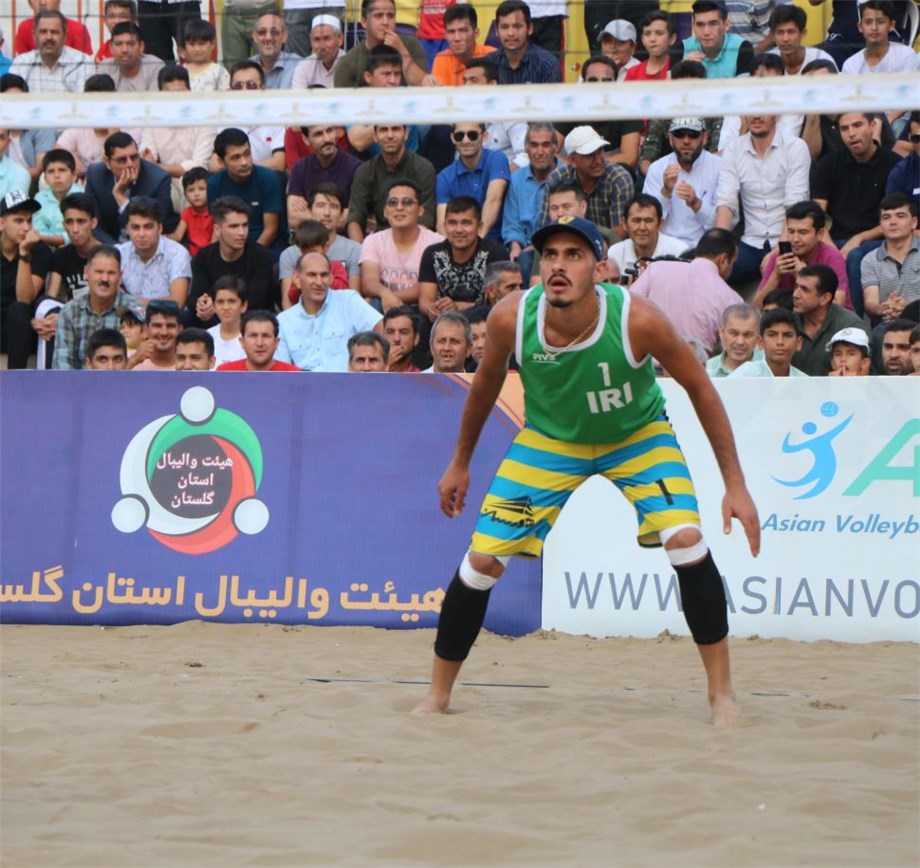 Preparing to receive the Mikasa is Alireza Aghajani of Iran.

Qeshm, Iran, January 10, 2020 - Top-seeded Bahman Salemi and Arash Vakili had the experience, but youthful Alireza Aghajani and Javad Firouzpourbandpei captured the gold after defeating their Iranian rivals in the finals here Friday at the inaugural Dargahan Cup.

Seeded 12th in the FIVB World Tour event, the 21-year-old Aghajani and 22-year-old Firouzpourbandpei posted a 2-0 (21-17, 21-15) Dargahan Cup gold medal win in 34 minutes over the 30-year-old Salemi and 29-year-old Vakili to share the $1,000 first-place prize.
The Dargahan Cup was only the second FIVB World Tour event for Aghajani and Firouzpourbandpei while the top-seeded Salemi and Vakili were competing on the international beach volleyball circuit for the thirteenth time together. The elder Iranians had also posted a 17th last July at the FIVB World Championships in Hamburg.
Friday’s match marked the second-straight win for Aghajani and Firouzpourbandpei over Salemi and Vakili as the two teams met last October in the semifinals at the 2019-2020 season-opening event on Iranian sand in Bandar Torkaman with the youngsters prevailing 2-1 (21-18, 14-21, 16-14) in 58 minutes over their rivals.
Aghajani and Firouzpourbandpei, who placed second in October’s FIVB stop in Bandar Torkaman, have now compiled a 9-2 record this season.  This week, Aghajani and Firouzpourbandpei dropped their first match in the Dargahan Cup to Japan’s fifth-seeded Ryota Sato/Nobuaki Taira 2-0 (23-21, 21-12) in a 34-minute pool play match Wednesday.
Salemi and Vakili, who split $700 for finishing second, have now collected four FIVB World Tour medals together highlighted by an October 2018 gold in Bandar Torkaman. The elder Iranians have an 8-2 match mark this season with a career record to 29-17.
The finale was the second all-Iranian gold medal match on the FIVB World Tour. On October 5, 2018, Salemi and Vakili defeated Abolhamed Mirzaali and Rahman Raoufi 2-0 (21-11, 22-20) in 39 minutes in the Bandar Torkaman gold medal match.
In the bronze medal match, the second-seeded Mirzaali and Raoufi secured the $500 for winning the third-place contest by posting a 2-0 (21-15, 2-18) win in 36 minutes over eighth-seeded Saifeddine Elmajid and Benlouaer Ziad of Qatar.
With the win, Iran sweep the medals for the second-time in FIVB World Tour history with the first being at the October 2018 event Abbas Pourasgari/Aghamohammad Salagh defeated a team from Kazakhstan for the bronze medal.
Quick links - Beach volleyball:
FIVB Beach Volleyball World Tour - Qeshm, Iran
Facebook
Twitter
Instagram
The men’s FIVB World Tour's next stop begins Tuesday in the South Pacific as Volleyfest Cook Island will be played at The Edgewater Resort and Spa Beach Volleyball Centre in Rarotonga. The women’s first FIVB World Tour event will be February 6-9 in Siem Reap, Cambodia.