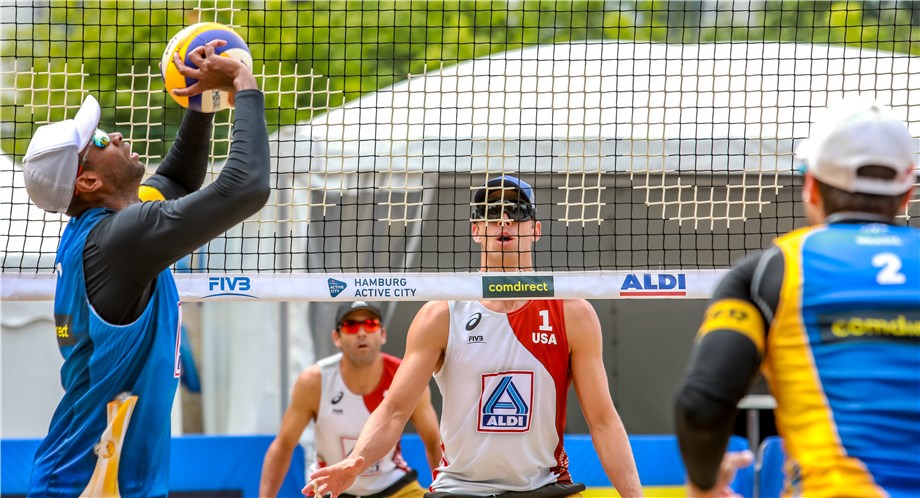 Hamburg, Germany, July 4, 2019 - In 10-plus hours of men's beach volleyball action here Thursday at the US$1-million FIVB World Championships presented by comdirect and ALDI Nord, the biggest surprise was the elimination of Evandro Goncalves and Bruno Oscar Schmidt of Brazil.
Quick links - Beach volleyball:
FIVB Beach Volleyball World Championships Hamburg 2019
FIVB.com - Beach volleyball
Facebook
Twitter
Instagram
With Evandro winning the 2017 World Championship gold medal in Vienna and Bruno topping the podium in 2015 in the Netherlands, the 16th-seeded Brazilians dropped a 2-1 (21-10, 21-18) elimination decision in 38 minutes to 29th-seeded Billy Allen and Stafford Slick of the United States.
Two hours later on the Am Rothenbaum Stadium centre court, Andre Loyola kept his hopes alive of winning a second-straight World Championship as he and his 17th-seeded Brazilian partner George Wanderley scored a 2-1 (17-21, 21-15, 17-15) elimination over 11th-seeded Aleksandrs Samoilovs/Janis Smedins of Latvia in 62 minutes.
Andre and Evandro defeated Clemens Doppler and Alexander Horst for the 2017 World Championship trophy in Vienna as each Brazilian has played with two different partners in the past 12 months as has Bruno, who topped the 2015 podium with Alison Cerutti.
The Brazilian's matches were two of the 16 contests in the first round of elimination on Friday at the championships as the top three-ranked pairs on the FIVB World Tour won as expected on the seventh of 10 days of competition at Rothenbaum Stadium.
“We’re ecstatic,” said the 34-year old Slick, who is competing in his first World Championships. "We have nothing but respect and great things to say about Bruno and Evandro. They’ve been crushing on the World Tour for a long time and we were fortunate to sneak one away from them today. It’s always special to compete with USA over my heart, but today it means a little bit more.”
Evandro, who captured the bronze medal at the 2015 World Championships with Pedro Solberg, said: "It was their day. They played well, especially on serving, and that wasn’t the case for us, especially for me. It’s frustrating because I had huge goals here and we had good momentum and expected a better finish."
Winning as expected on Thursday were top-seeded Anders Mol/Christian Sorum of Norway, second-seeded Michal Bryl/Grzegorz Fijalek of Poland and third-seeded Viacheslav Krasilnikov/Oleg Stoyanovskiy of Russia.
On a day where the Americans were celebrating their country's 243th birthday, four men's teams from the North American nation won elimination matches led by 43-year old Jake Gibb, who teamed with his seventh-seeded partner Taylor Crabb to oust ninth-seeded Adrian Gavira/Pablo Herrera of Spain with a 2-0 (21-16, 21-17) win in 37 minutes.
Also winning for the Americans Thursday were sixth-seeded Phil Dalhausser/Nick Lucena and 13th-seeded Tri Bourne/Trevor Crabb with victories over teams from Qatar and Germany, respectively. Dalhausser, the 2007 world champion with Todd Rogers, and Lucena were playing their second-straight elimination match as the Americans have rebounded from a 1-2 pool play mark.