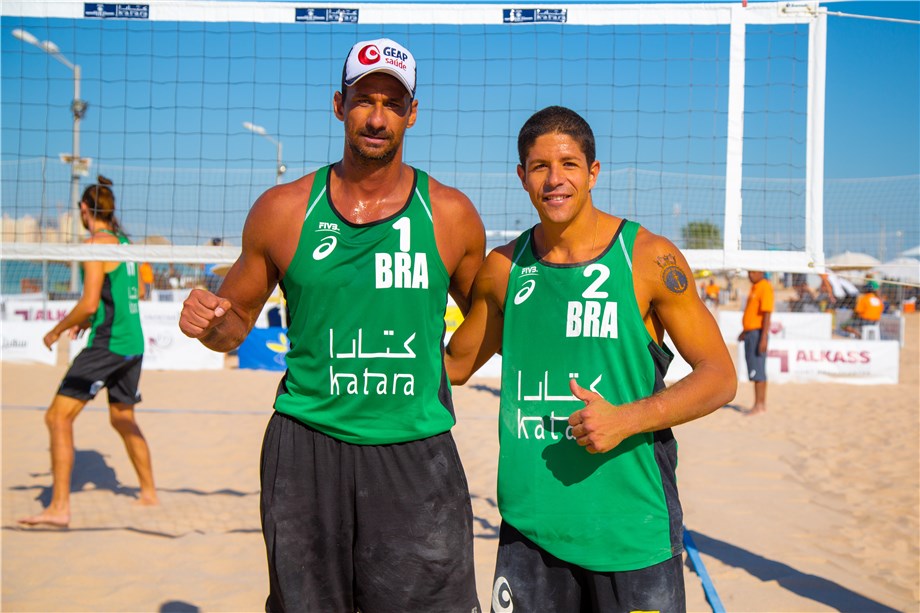 Doha, Qatar, March 12, 2019 – It has been a long and winding five years, but now that Alvaro Filho and Ricardo Santos are back together their thoughts will inevitably turn to the Hamburg 2019 FIVB Beach Volleyball World Championships.
Alvaro and Ricardo are currently competing in the Katara Beach Cup in Doha. It is the fifth time that Qatar has hosted a World Tour tournament and it will run from March 12-16 at the Katara Cultural Village.
Quick links - Beach volleyball:
FIVB Beach Volleyball World Tour - Doha
FIVB.com - Beach volleyball
Facebook
Twitter
Instagram
The Brazilian pair teamed up at the start of the 2013 season and split in August 2014. During their time together they won silver at the Mazury 2013 World Championships, gold in Gstaad, silver in Stavanger and bronze in Shanghai.
They returned to the World Tour at the Las Vegas 4-Star in October 2018 and immediately showed their potential by reaching the quarterfinals. In the five years since splitting Alvaro has developed as a player and at 28-years-of-age he is a far more mature and confident player than he was in 2013.
At 44 there is little that Ricardo hasn’t won, but such is his drive that Alvaro ranks him among sport’s all-time greats.
“Ricardo is still developing as a player, though I don’t know how,” Alvaro said. “I’ve developed playing with other partners and now sometimes I can tell him what to do. In the past I just listened because he was like the coach on the court.
“I like playing with him and he is still playing very well. He’s a legend. It’s like playing with Michael Jordan or Roger Federer.
“Every player works hard and practices every day so that they can play the Pan-American Games, or the European Games, or the Olympic Games or a world championships and that is what I think pushes Ricardo and keeps the fire alive inside him. I don’t know where this drive comes from.”
Alvaro and Ricardo needed to beat compatriots George Souto and Thiago Barbosa in a country-quota match on Monday. Then on Tuesday they needed three sets to beat Italy’s Alex Ranghieri and Enrico Rossi 2-1 (21-18, 22-24, 15-10).
“I really like playing with Ricardo and we are enjoying the moment,” Alvaro said. “We are really happy that we qualified. We want to keep this good feeling and take it to the main draw with us.”