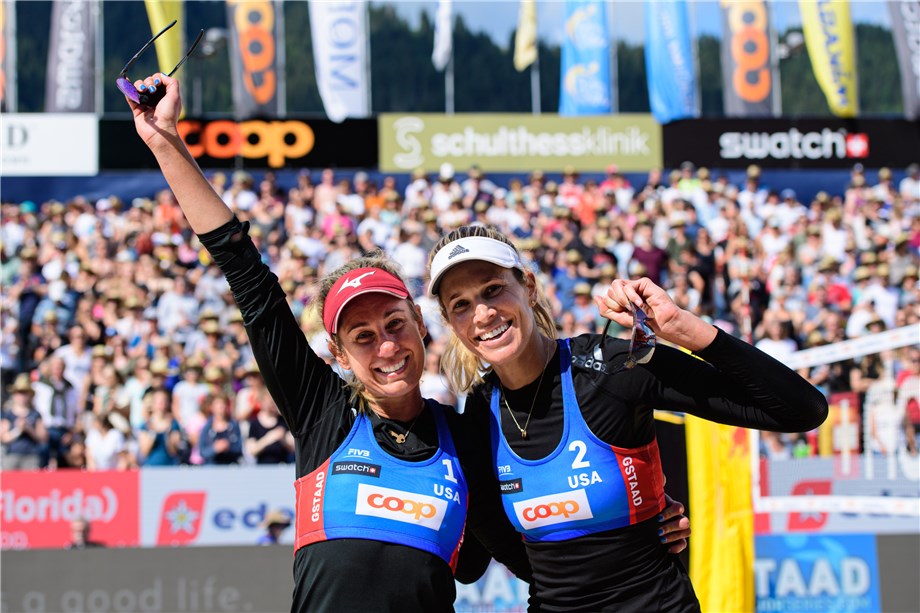 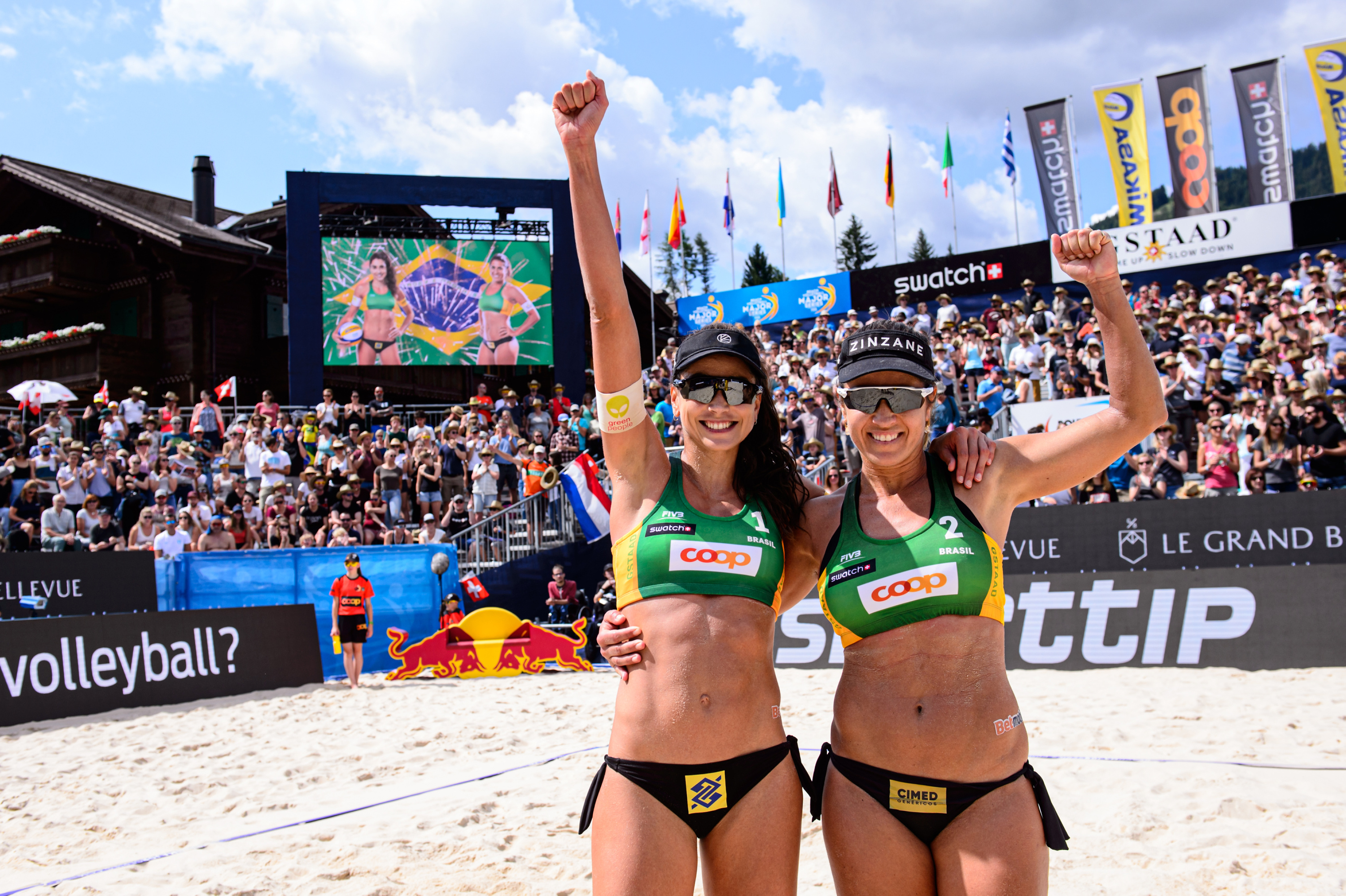 Carolina Salgado (right) celebrates a point in Gstaad with her Brazilian partner Maria Antonelli
With the Americans and Brazilians competing in the opposite of the Swatch Major Gstaad bracket, Klineman and Ross will play top-seeded Nina Betschart/Tanja Huberli of Switzerland or 18th-seeded Natalia Dubovcova/Andrea Strbova of the Slovak Republic in a Sunday morning semifinal match.
Betschart and Huberli, who placed fourth last weekend at the world championships, and the Slovakians will play at 4 p.m. (local time) Saturday in the final women's quarterfinal match. The two teams met at the World Championships with the Swiss eliminating Dubovcova and Strbova in the first elimination round.
Antonelli and Carolina’s semifinal opponent will be either newly-crowned FIVB World Championships and second-seeded Melissa Humana-Paredes/Sarah Pavan of Canada or fifth-seeded Ana Patricia Silva/Rebecca Cavalcanti of Brazil.
In previous Gstaad appearances together, Antonelli and Carolina lost a country quota match in 2017 and placed ninth in 2018.  Antonelli and Talita Antunes captured the 2009 Swatch Major Gstaad gold medal and placed fourth together in 2010 and 2010. Antonelli also placed fourth in the Swiss village in 2014 with Juliana Felisberta.  Carolina’s best Gstaad finishes previously were fifths in 2007, 2008 and 2010 with her sister Maria Clara.
The defending Swatch Major Gstaad champions, Humana-Paredes and Pavan have won both FIVB World Tour matches with Ana Patricia and Rebecca, including a semi-final win last October in the United States at Las Vegas. 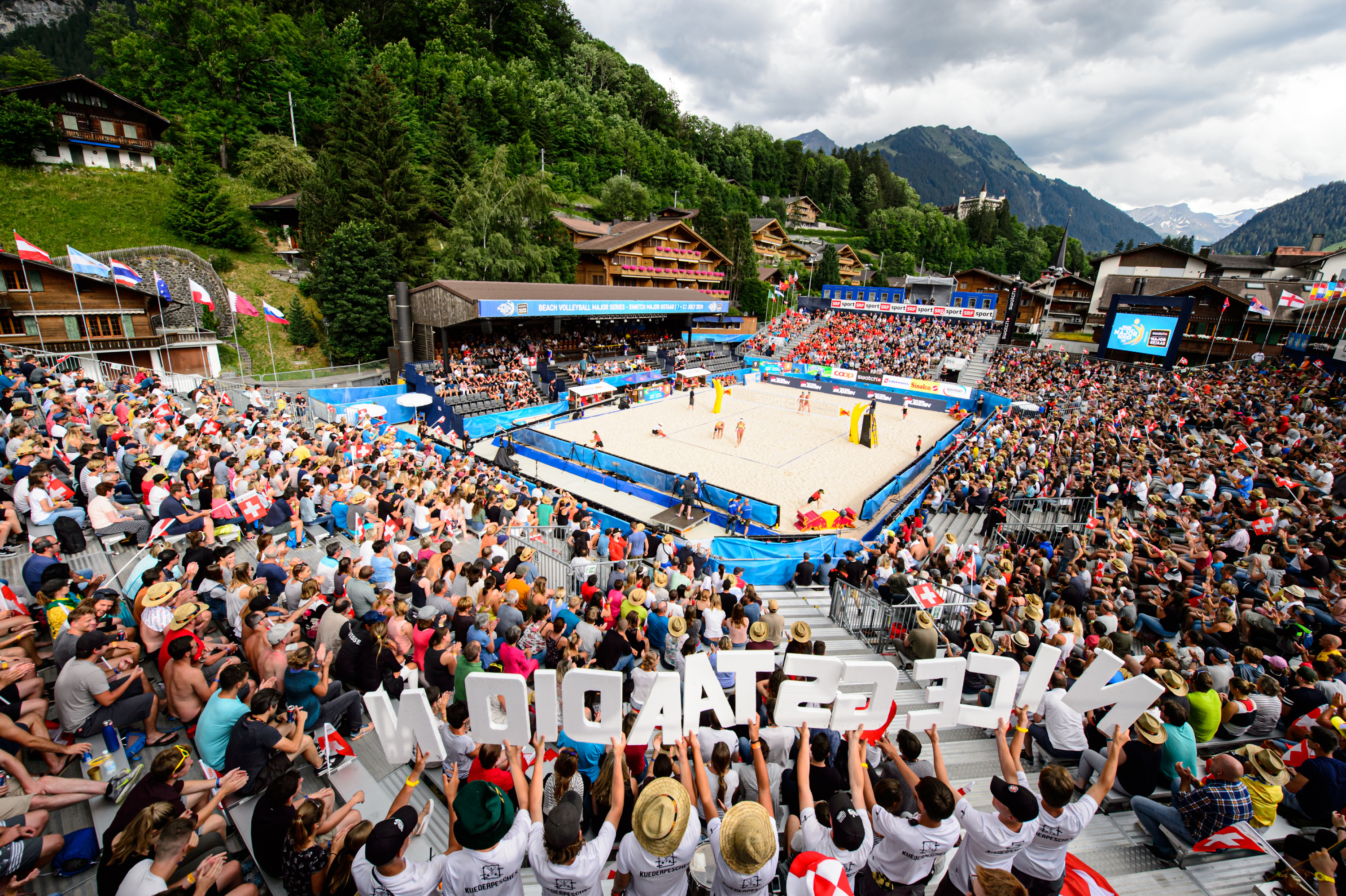 Center court at the 20th Swatch Major Gstaad
After the All-American match, Ross said she and Klineman are “finding how we play best as a team. We didn’t start that way in this tournament, but we found it in the last two matches. We had a very good game plan against them and of course when you play your own country, you’re a little bit more familiar with these teams. It was nice of (the tournament organizers) to put us at 9:30 in the morning so we have the rest of the day to recover.”
Klineman and Ross are competing in their second Gstaad event together after placing fifth in 2018 after dropping a quarterfinal match to Humana-Paredes and Pavan, who also defeated the Americans for the gold medal last Saturday in Hamburg at the World Championships.
Klineman said “it’s been a little bit of a slow start for us in Gstaad. That’s a great team and we knew we’d have to keep raising the level for high quality teams. Everybody’s been really tough this tournament. It’s been a grind for us but I’m proud of how hard we’re fighting and even when we don’t feel our best mentally and physically, we’re grinding away to win matches”
A six-time Swatch Major Gstaad champion, Walsh Jennings said “April and Alix served much tougher than we did, and they kept the pressure on us with their serving. They’re very big, a very good defensive team and they serve so tough it gets us out of rhythm a bit. I think we handled it very well and I’m proud of Brooke and how she fought off so many gnarly serves. I’m not happy to lose, not at all, but I’m happy with our progress as a team. There’s no doubt about it, we are one of the top teams in the world and this is just part of the growth process.” 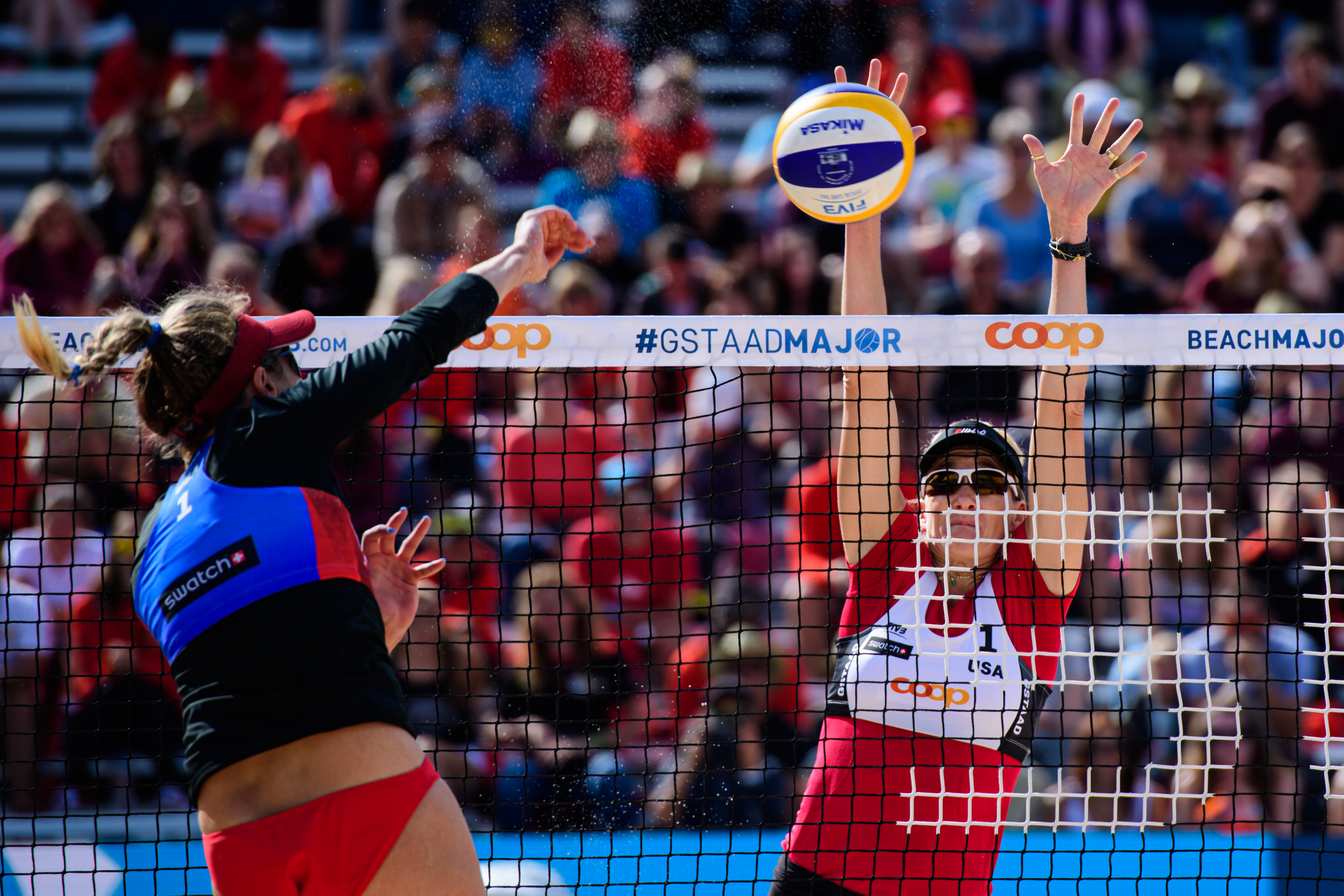 April Ross (left) hits against American rival Kerri Walsh Jennings as the two teamed for a silver medal together at the 2016 Swatch Major Gstaad.
With the US$600,000 Swatch Major Gstaad men's final four Saturday featuring pairs from Brazil, Italy, the Netherlands and Norway, the women's medal matches will be Sunday afternoon.