Anders Mol: I don't think we realize what we have achieved

Jurmala, Latvia, September 21, 2020 - If there were a year that something strange were going to happen in the European Championships, this would have been the one. It would have been for very different reasons between the men and the women, but still: everything about 2020, both on and off the beach, has favoured the unusual.

Jurmala, Latvia, September 21, 2020 - If there were a year that something strange were going to happen in the European Championships, this would have been the one. It would have been for very different reasons between the men and the women, but still: everything about 2020, both on and off the beach, has favoured the unusual.
It is possible that this is the most talent-rich epoch in European beach volleyball history for the men. For so long, the sport has been dominated by Brazil and the United States.
But now?
Now, it’s a strange event when a major tournament, even a four-star, is not won by a European team. The continent swept the podium at the 2019 FIVB Beach Volleyball World Championships – gold to Viacheslav Krasilnikov and Oleg Stoyanovskiy of Russia, silver to Clemens Wickler and Julius Thole of Germany, bronze to Anders Mol and Christian Sorum or Norway – took three out of the top four spots in Gstaad, two of three medals in Vienna, and, again, swept the 2019 FIVB Beach Volleyball World Tour Finals – Russia, Germany, Norway again.
With that much talent comes at once a certain sense of predictability – Europe will certainly have some measure of success – and unpredictability – which team will enjoy that success this week?
And when all that talent is lumped together, as it was in Jurmala this weekend for the European Championships, you really have no clue what you’re going to get for the vast majority of the matches.
The women, however, are in a slightly different scenario. They’re younger, a little less polished. A lot of upside mixed in with a little bit of raw. A similar wave of European medals is well on its way for the women, though the dominance is not there just yet.
With that youth comes parity, and with parity comes unpredictability.
The end of this European Championships, at first blush, wasn’t all that surprising. The two best teams on the planet, Mol and Sorum and Krasilnikov and Stoyanovskiy, met in the men’s finals, and the team that had won the previous two European Champs, Mol and Sorum, made it three, winning every set throughout the entire weekend, closing out the finals 2-0 (21-19, 21-15).
Claiming gold for the women was Switzerland’s Anouk Verge-Depre and Joana Heidrich, who were seeded third in the tournament but were as hot as any, closing 2019 with gold in Moscow and fourth in the World Tour Finals.
The end of this weekend, then, wasn’t all that confounding. Two gold medal-worthy teams won gold medals. 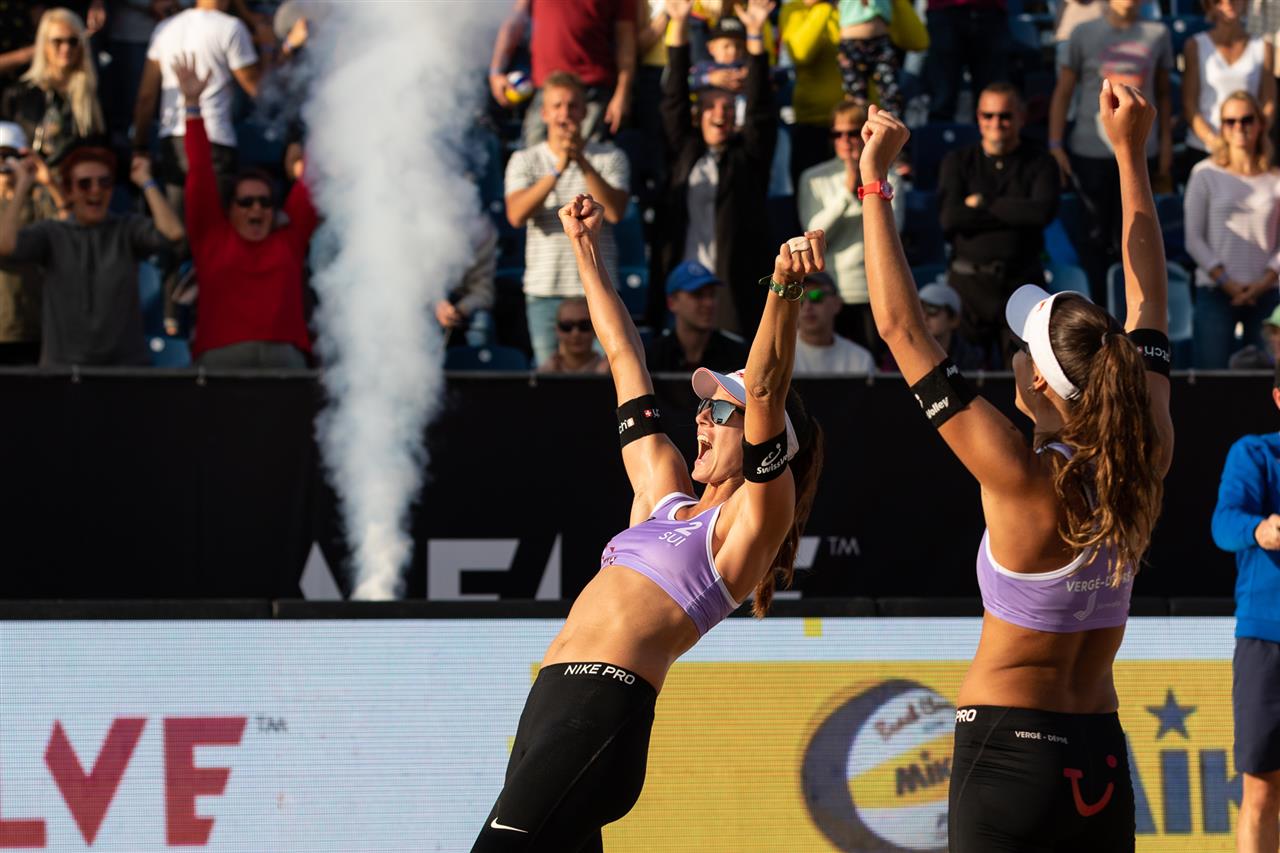 Joana Heidrich and Anouk Verge-Depre celebrate.
It was the beginning and middle, rather, that provided much of the theatre.
So much of that theatre, for the women, came scripted by a little-known German team named Cinja Tillman and Kim Behrens. They’ve been knocking on the door for some time now, both in their home country and on the World Tour, creating a bit of momentum with a bronze at the German Championships.
Still, they came in as the No. 36 team in the world, fifth in their own country.
Who could have predicted the run of upsets they authored in Jurmala?
Down went the one seed, Tanja Huberli and Nina Betschart, in the second round of bracket play, 21-18, 21-15. Another upset would have been required in the ensuing round had it not been for another pair of upsets, these thanks to Finns Riikka Lehtonen and Niina Ahtiainen. The 28th-seeded pair broke pool by knocking out 12th-seeded Lena Plesiutschnig and Katharina Schutzenhofer of Austria, then added two more, coming back from first-set losses to Spanish pairs No. 17 Paula Soria and Maria Carro and No. 8 Lili Fernandez and Elsa Baquerizo.
Just two rounds in, the tournament was bereft of seeds one, five, eight, seven and nine. Meanwhile, the 10 (Tillman and Behrens) was set to play the 28 (Finland), and the young Germans were far from finished.
After sweeping Finland, they would again march on in the semifinals, engineering another upset over fourth-seeded Russia, Nadezda Makroguzova and Svetlana Kholomina.
It marked the first final of their partnership in a World Tour event.
Finals are no such novel experience for the Swiss.
They had made four prior to this weekend in Jurmala, winning once, in Moscow. On Sunday, they added another gold to that resume, fending off those upstart Germans, 2-1 (18-21, 21-14, 18-16) in a thrilling final befitting a thrilling tournament.
There is no telling what the future holds for Tillman and Behrens. For Verge-Depre and Heidrich, however, this is very much another indicator that they could be one of Europe’s strongest hopes for a medal come next summer in Tokyo. A difficult beginning to the 2019 season – six finishes outside the top 10 – has been flipped into five semifinal appearances and three medals in their last six tournaments. 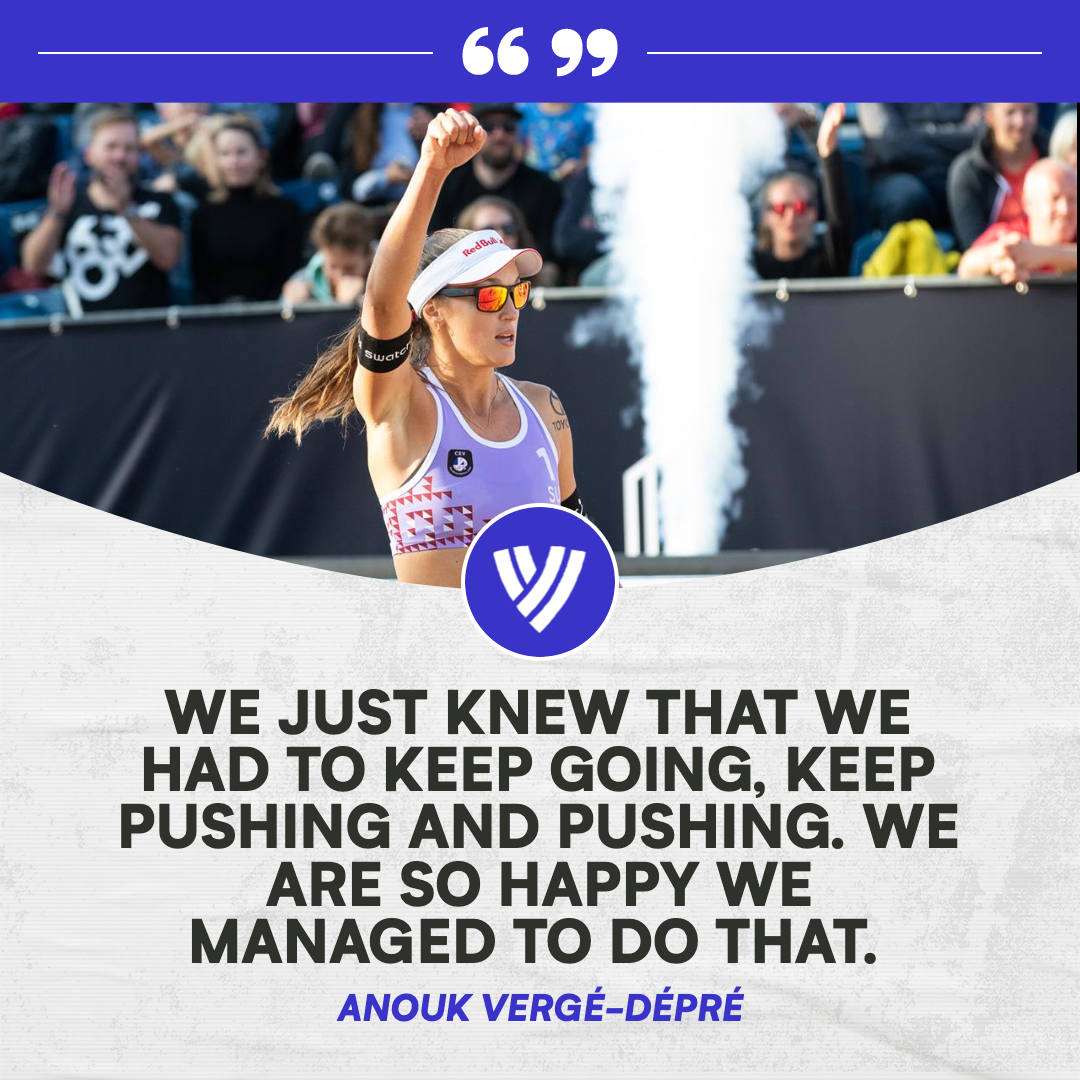 "We just knew that we had to keep going, keep pushing and pushing,” Verge-Depre said. “We are so happy we managed to do that.”
Yes, it would be the three seed on the women’s side who won, and it would be Russia and Norway in a fan-friendly finals matchup for the men, one that could be a preview of an Olympic final next summer in Tokyo. While they would combine to win a clean 20 of 21 sets prior to the finals of this tournament, the rest of the bracket was less predictable.
And that was thanks to a fascinating tournament from Italians Paolo Nicolai and Daniele Lupo.
A puzzling loss to Belarus in their opening match put them in a win-or-go-home matchup with Germany’s Sven Winter and Armin Dollinger, which would require a comeback after losing the first set.
That win, however, set up a clash with Germans Clemens Wickler and Julius Thole in the first round of bracket play. It’s a matchup you wouldn’t typically see until a semifinal or final.
And they were playing in the first round? The three seed vs. the fifth?
Strange as it may have been, those two meeting that early, the match lived up to the billing. To three sets they won again, those Italians, scratching out a 15-12 win in the third after going down 4-1 to start. After knocking out fourth-ranked Latvia’s Edgars Tocs and Martins Plavins in two, they’d need all three to push on once more, beating Poland’s Bartosz Losiak and Piotr Kantor in maybe the best match of the entire tournament, 2-1 (21-19, 19-21, 18-16).
In their wake to the semifinals, Nicolai and Lupo had vanquished the three and four seeds.
The biggest upset, however, on either side, came thanks to Austria’s Alex Huber and Chris Dressler, who stunned the Netherlands’ Alex Brouwer and Robert Meeuwsen, 2-1 (16-21, 21-17, 15-12), in the first round.
It eased the path of Krasilnikov and Stoyanovskiy, who met the smaller Austrians rather than the former world champs, though it didn’t appear they needed much help.
It didn’t much matter who came in their path.
Austria would be the only team in bracket play to even come within two points of the Russians. Norway’s Hendrik Mol and Mathias Berntsen would fall 21-14, 21-9. Fellow Russians Nikita Liamin and Taras Myskiv, too, went down, 21-17, 21-16.
It seemed scripted, the final: Norway vs. Russia. The two best teams not just in Europe, but the world.
And in the end, it would be the team that seems magnetized to gold medals, Mol and Sorum, who would claim one more.
Three straight European Championships these Norwegians have won now, a feat that no amount of hyperbole can overstate. 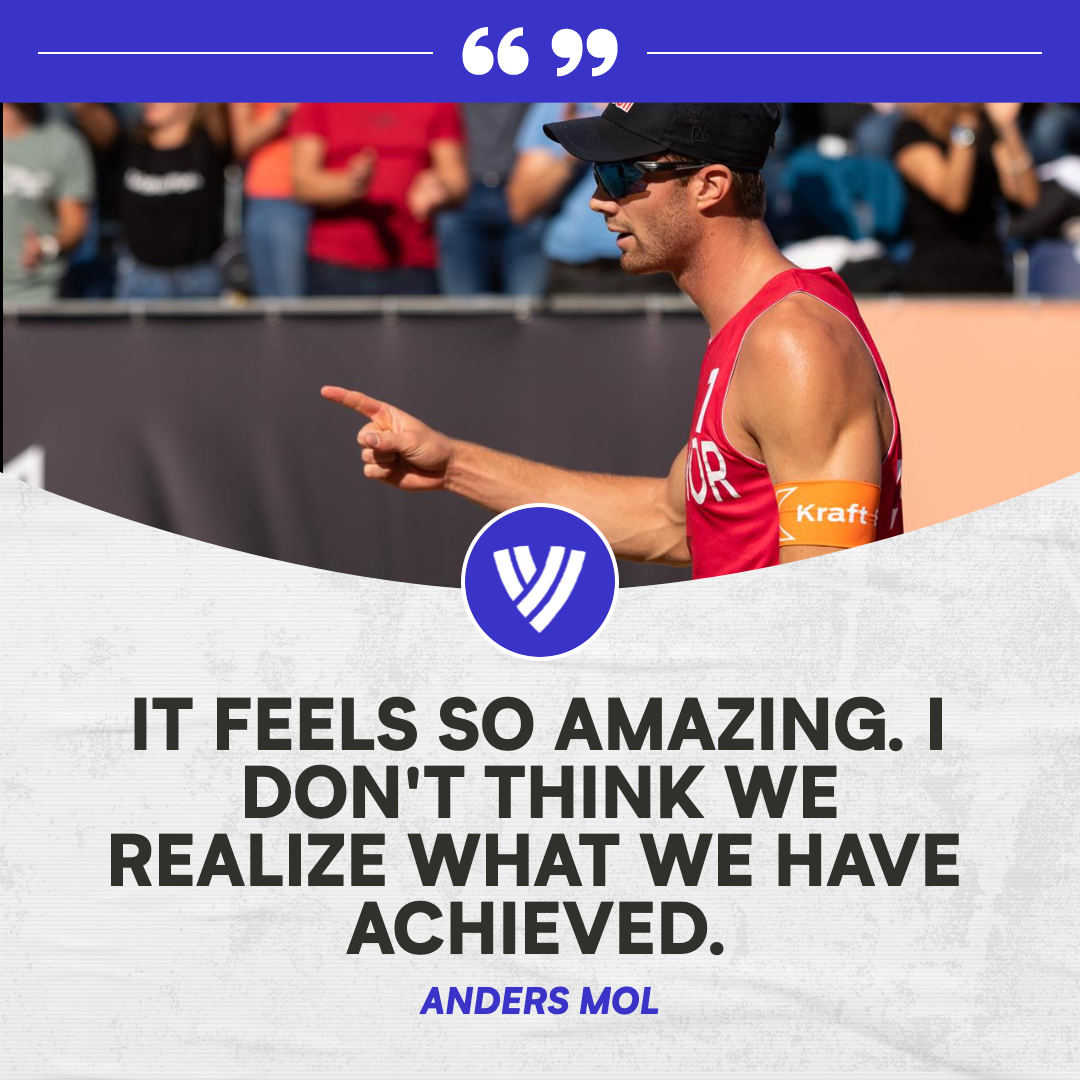 "It feels so amazing,” Mol said afterwards. “It has been a tough year, no tournaments and we are so happy that CEV put on a show here and we were able to come and play at the EuroBeachVolley, and to pull off a third victory in a row, I don't think we realize what we have achieved.”