Andreatta and Abbiati earn memorable scalp in The Hague 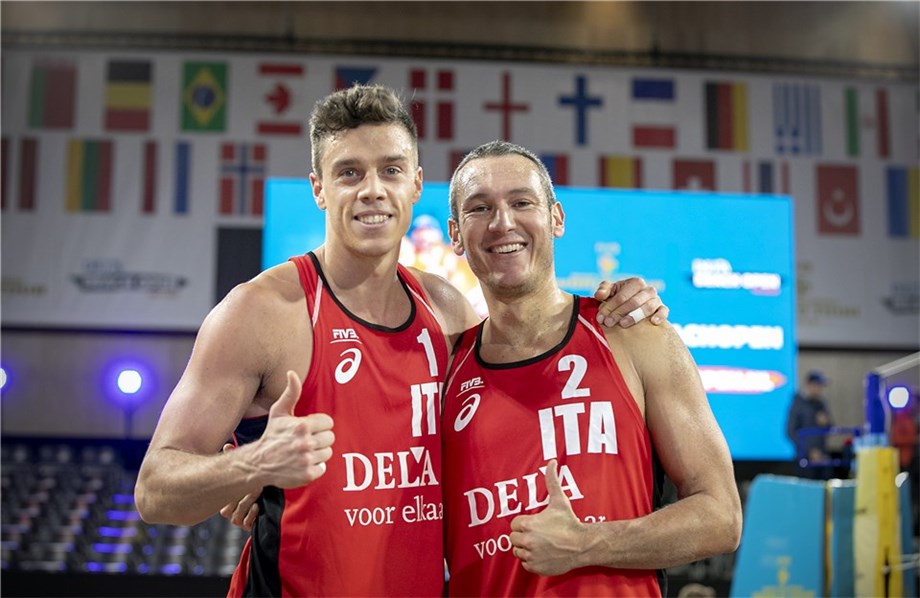 The Hague, Netherlands, January 4, 2019 – Tiziano Andreatta and Andrea Abbiati recorded a memorable win to ensure their progress through the pool stage at the 4-Star Dela Beach Open on Friday.
The Italian pair beat former Olympic and world champion Ricardo Santos and his partner Alvaro Filho 2-0 (21-19, 21-17). It means they remain on course to match their best FIVB Beach Volleyball World Tour finish, which was ninth at the Gstaad 5-Star in 2018.
“It went well,” Abbiati said. “Whenever you win it is always good. We had to find a high level and keep it there all match, which we did.
“We pushed even harder during the important points of the match and that made the difference. We managed to find something new, whether in attack or starting a new counterattack.”
Quick links - Beach volleyball:
FIVB Beach Volleyball World Tour
FIVB.com - Beach volleyball
Latest Videos
Facebook
Twitter
Instagram
They were unable to make it two wins from two when they faced Russia’s Oleg Stoyanovskiy and Viacheslav Krasilnikov, who eventually prevailed 2-0 (21-14, 21-6).
Even so they showed enough quality against the Brazilians to suggest that whoever faces them in the later rounds will face a tough pairing.
“Before the match we were a little nervous going up against him, but once we went on the court we only thought about the match and nothing else,” Andreatta said.
“We managed to cause him problems and every ball thought about not giving him any chance to attack.”
Brazil pair Bruno Schmidt and Pedro Solberg also won their opener before losing their second.
The pair are six months into their second time as a pairing, and are still working hard to find their rhythm.
They began by fighting back from losing the opening set to France’s Quincy Aye and Arnaud Gaulthier-Rat and won 2-1 (18-21, 22-20, 15-12).
“It was a crazy match,” Bruno said after they beat the French duo. “We started very badly and continued slowly. I think it was the time. I don’t think our bodies woke up till nine o’clock.
“It was good in some ways as it starts you in the right way to grow into the tournament, which you don’t always get when you win 2-0. But we were forced to come back to win.”
However, they were unable to match the result against Clemens Wickler and Julius Thole, with the Germans winning 2-0 (21-19, 21-17).
The tournament runs from January 2-6 and is being played on indoor beach courts at the Sportcampus Zuiderpark. It is the second year in a row that The Hague has hosted a tournament at this time of year and it has proved popular among the players who are able to compete at a top-level tournament when they would normally be involved in warm weather training.