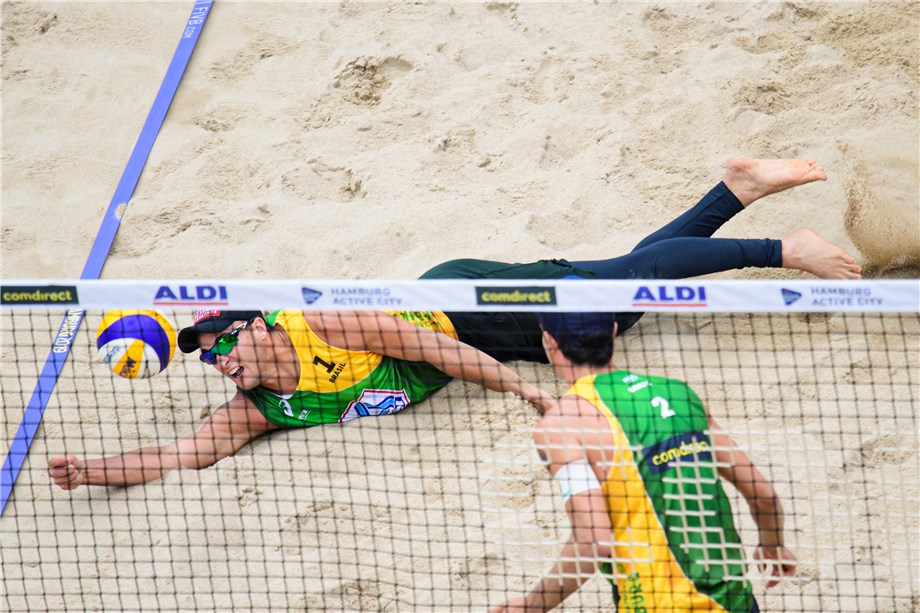 Hamburg, Germany, July 5, 2019 - The Round of 16 matches here Friday at the US$1-million FIVB World Championships turned sour for several of the top-ranked teams in the world. Highly-regarded pairs from Poland and Russia were eliminated by teams from Brazil and the United States, respectively.
Friday's first upset featured 2017 world champion Andre Loyola Stein and his new partner George Wanderley ousting second-seeded Michal Bryl/Grzegorz Fijalek of Poland as the 17th-seeded Brazilians scored a 2-1 (21-16, 15-21, 15-11) win in 51 minutes.
When asked about winning in the tie-break set, Wanderley said “I don’t know why, but as long as we keep winning them, I don’t care. I do know, however, that we’ve only managed to go through most of them because we stuck together in the tough moments and we’ll need it even more now that the tournament is coming to its end and only the best of the best teams are left.”
In the next match on the Am Rothenbaum Stadium side court, fifth-seeded Ilya Leshukov and Konstantin Semenov of Russia dropped a 2-0 (21-18, 21-18) decision in 34 minutes to 13th-ranked Tri Bourne/Trevor Crabb of the United States.
“One of the main parts of our games is our energy level,” said Crabb, who saw his younger brother lose earlier Friday with Jake Gibb to another Russian team. “When we’re both fired up, that’s when we play better. That was the difference-maker against Germany Thursday, and we knew we needed to carry it coming into this game."
With two-straight elimination wins, Andre and George will be meeting the Americans Saturday in the quarterfinals with the Brazilians defeating Bourne and Crabb for a bronze medal May 26 at the FIVB World Tour stop in Jinjiang, China.
"We lost to the Brazilians in a bronze medal match in China seven weeks ago," said Crabb. "We can get some redemption here, so hopefully that helps us bringing that extra fire again.”
Also posting a seed-break-through win Friday was Adrian Carambula/Enrico Rossi of Italy. As the last entry into the Men's World Championship after a late withdrawal by a team from Sierra Leone, the 45th-seeded Italians eliminated 32nd-seeded Robin Seidl/Philipp Waller of Austria 2-0 (21-18, 21-15) in 43 minutes.
The 12th edition of the Beach Volleyball World Championships continues through Sunday with the men's gold medal match where the winning team nets a berth for their country and a berth in the Tokyo 2020 Olympics along with sharing the $60,000 first-place prize. 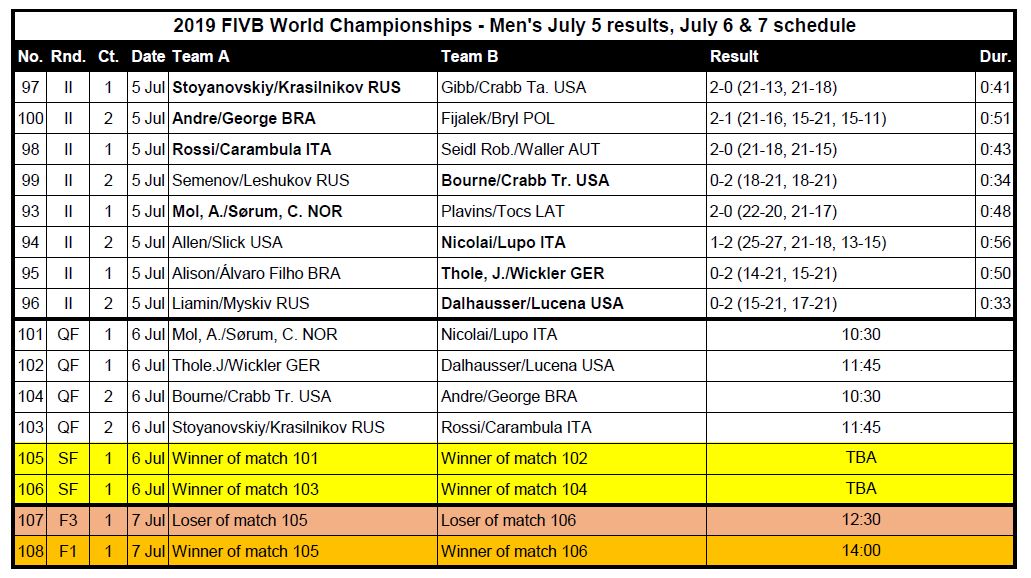