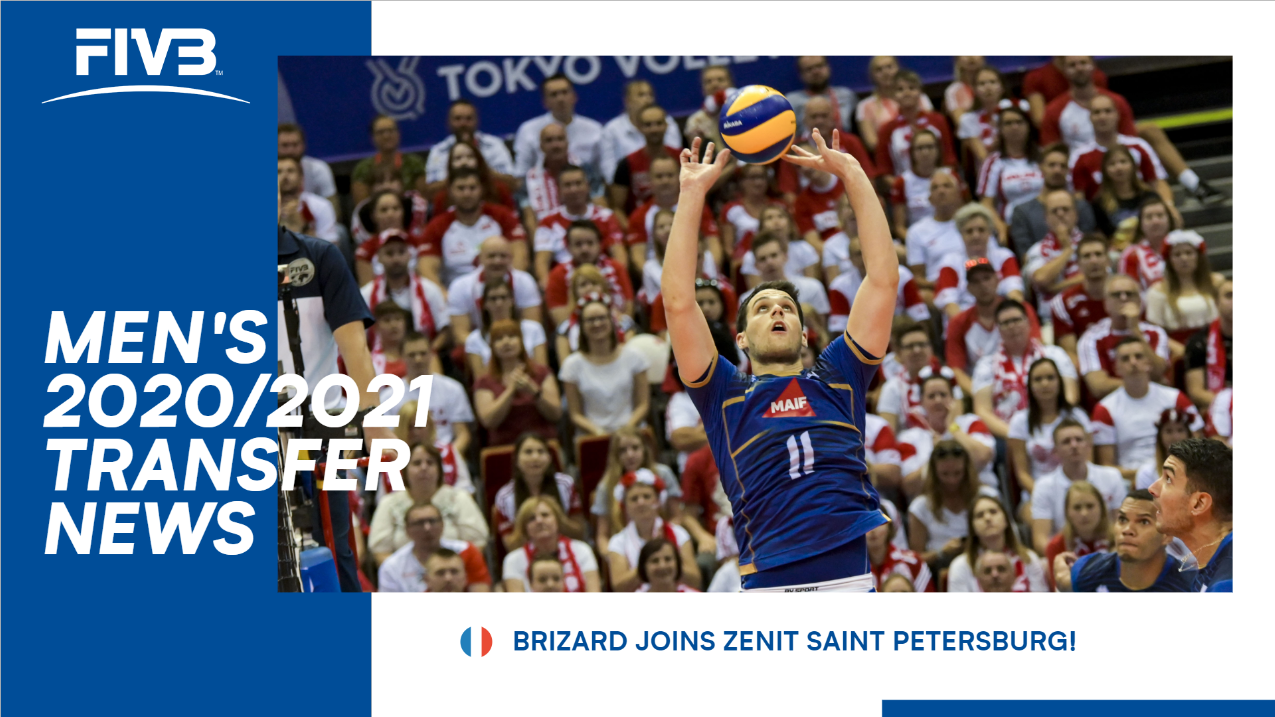 The 1.96m-tall playmaker, who made a major contribution to France’s success at the continental Olympic qualifier for Tokyo 2020 earlier this year, will join the fifth-placed team of the 2019-2020 Russian Superliga season after spending the last three seasons with Poland’s VERVA Warszawa ORLEN Paliwa.
26-year-old Brizard is a 2017 FIVB Volleyball World League gold medallist and a 2018 FIVB Volleyball Nations League silver medallist. As an age-group international, in 2011 he was named Best Setter of the FIVB U19 World Championship and earned silver at the CEV U19 European Championship.
Тhe 23-year-old new call-up to the Russian national team Sergei Melkozerov was listed by the Russian federation as another incoming player for Zenit Saint Petersburg. While his previous club ASK Nizhny Novgorod have officially announced Melkozerov’s departure, the club from Saint Petersburg have yet to confirm the transfer. The 1.80m-tall libero won bronze at the 2017 FIVB U21 World Championship and at the 2016 CEV U20 European Championship.
Other recent market news from the men’s Russian Superliga:
• There has been a reversal in the news about Bozidar Vucicevic, the 21-year-old opposite of the men’s national team of Serbia. After April’s official information that the 2.05m-tall rising star had signed with Gazprom-Ugra Surgut for two years, now the club has announced that the deal is off because of the unclear situation around the coronavirus pandemic and Vucicevic will stay with Slovenia’s ACH Volley Ljubljana.
• 1.88m-tall libero Dmitry Kirichenko (32), silver medallist of the 2007 FIVB Junior World Championship and gold medallist of the 2006 CEV Junior European Championship with Russia, has moved to Dinamo-LO Leningrad Oblast after seven consecutive seasons with Ural Ufa.
• Dinamo-LO have extended their contract with 1.92m-tall outside hitter Anton Botin (29), who returned to the club in 2019 and is heading for his sixth season with the jersey of the Baltic coast side. Botin is a former Russian youth national team member in both volleyball and beach volleyball. He won bronze at the 2007 CEV Volleyball Youth European Championship and fifth place at the 2008 FIVB Beach Volleyball U19 World Championship.
• Dinamo Moscow loaned 1.93m-tall Russian outside hitter Sergey Nikitin (27) to Ural Ufa for one season. In the second half of the 2019-2020 season, he played on loan for Ugra-Samotlor Nizhnevartovsk. Nikitin is a former youth and junior international, a bronze medallist of the 2011 CEV Youth European Championship.
More volleyball from Russia:
Poletaev in transfer news from Russia!
Grankin dreams of ending national team career with Tokyo medal
Zaytsev and Krsmanovic off to Kuzbass
Zenit Kazan back to work
Volkov and Biryukov lead transfers in Russia
Season's best announced in Russia
Former national team stars change clubs in Russia
Startseva aspires to highest awards at Tokyo Games
Voting for season’s best in Russia to be completed on Wednesday
Bednorz to fire up Russian league
Ten years later, Kosheleva reminisces about World Championship title
Karpol dynasty - 51 seasons at Uralochka and counting (Part 3)
...
Quick links:
Olympic Games Tokyo 2020
Facebook
Twitter
Instagram
Youtube
This website uses cookies to ensure you get the best experience on our website. For more information please read our Cookies Policy.
Ok