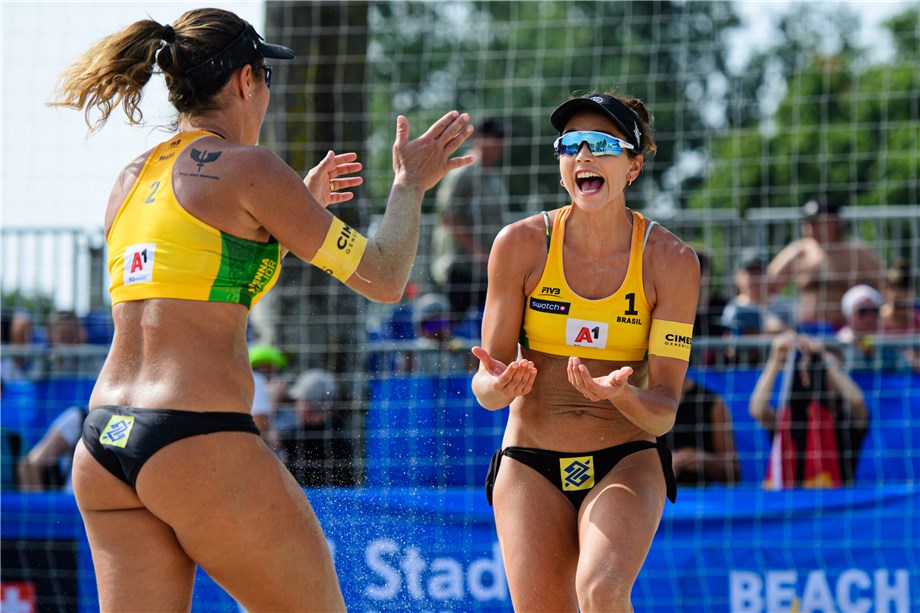 Vienna, Austria, July 31, 2019 - Four teams awoke Wednesday morning knowing they’d not only be part of one of the toughest pools in the A1 Major Vienna presented by Swatch, but also one of the more intriguing groupings.
Quick links - Beach volleyball:
FIVB Beach Volleyball World Tour - Vienna
Facebook
Twitter
Instagram
Just before gusty winds brought in an afternoon thunderstorm, few could be convinced otherwise.
The team that emerged with two victories and advancement to the round of 16 might have been the most unlikely.
Carolina Salgado and Maria Antonelli of Brazil, who started the tournament Tuesday dealing with transport issues to get to the Donauinsel courts just to play in the qualification tournament, defeated Germany’s Victoria Bieneck and Isabel Schneider to begin the day, then closed Wednesday with a nail-biting victory over Canadians Heather Bansley and Brandie Wilkerson.
That all came after two qualification wins on Tuesday, before which they barely arrived on the island in the Danube on time for their first match.
“I think with the Brazilians, we are really prepared for these things because we are always playing country quota,” Carolina said. “We have a strong mind on these things. I try not to let my mind go to these kinds of problems. Sometimes it’s difficult, but we can handle these adversities.”
The Brazilians’ 2-0 (27-25, 21-16) win over the Germans put them on a collision course with Bansley and Wilkerson, who had advanced with a 2-0 (22-20, 21-15) victory over defending tournament champions Barbora Hermannova and Marketa Slukova of the Czech Republic.
In a match that featured fierce winds at times that blew serves, passes and sets all over the court, Carolina and Antonelli scored a 2-0 (26-24, 24-22) victory over Bansley and Wilkerson.
“It was a difficult day, the teams we played are very good,” Antonelli said. “We need to relax, study other teams, take care of our bodies, take care of our minds and come out again with this strength.
“I’m very happy with our team, how Carolina played this game, and let’s do it again after tomorrow.”
The Brazilians earned a day off. Meanwhile, the Canadians and Czechs also advance, but will play in the round of 24 on Thursday.
Wilkerson and Bansley, who spent 35 weeks as the No. 1-ranked team in the world earlier this year, have struggled recently, particularly in the FIVB World Championships in Hamburg. Seeded third, they lost twice in four matches and finished 17th. 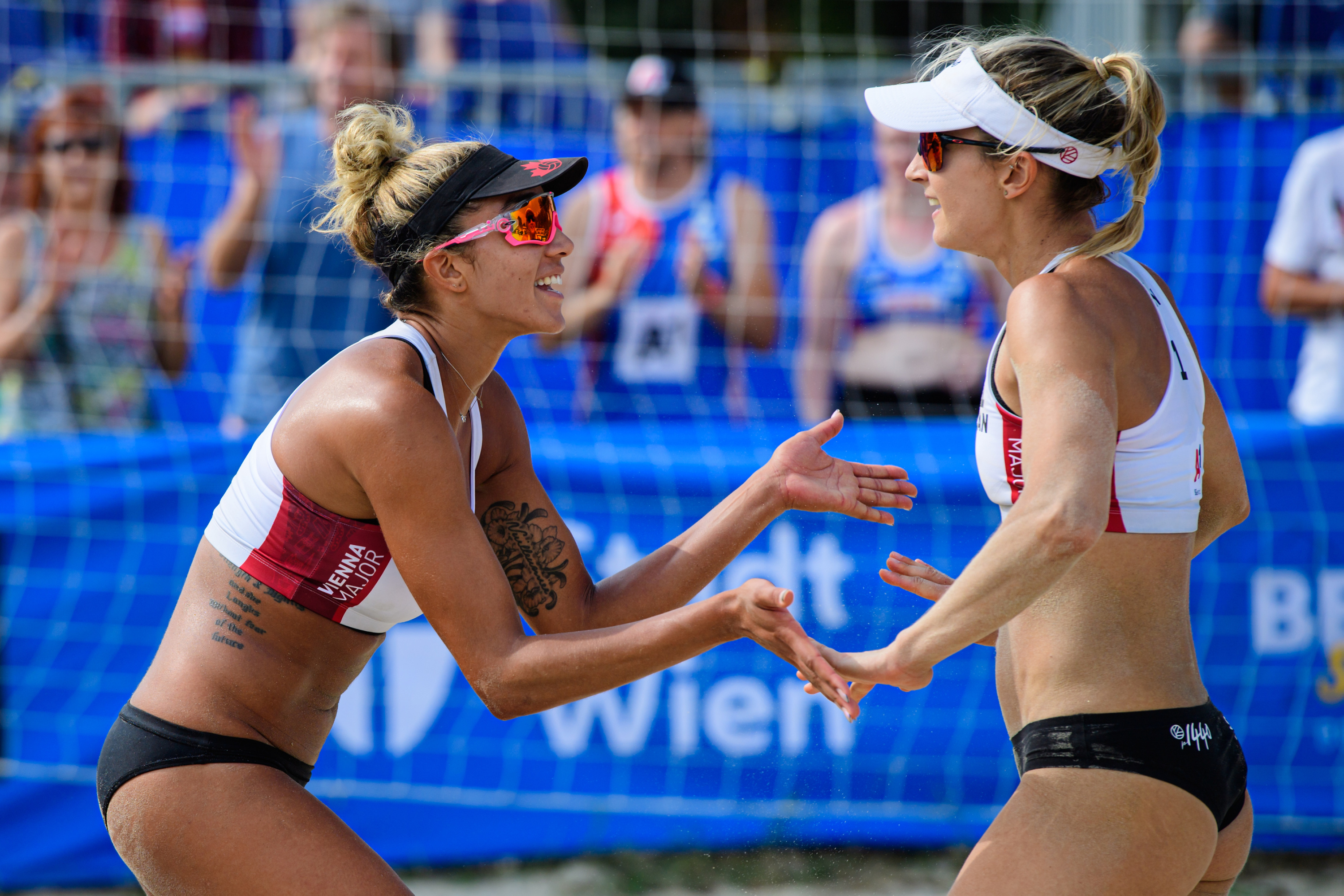 Canadians Brandie Wilkerson (left) and Heather Bansley
Then they responded with a bronze medal last week at the Tokyo Open, a dress rehearsal for the 2020 Olympics.
“I think that really gave us a lot of confidence,” Bansley said. “Coming here is a quick turnaround, but we wanted to continue playing our style of game that we played in Tokyo.
“Yeah, there were some results we were disappointed with, especially at Worlds, but it’s a long journey and we know that. We wanted to continue to work hard to get back on that podium.”
The recent adversity didn’t diminish the determination of the Canadians.
“Sometimes things just don’t work and that’s OK,” Wilkerson said. “I don’t think we wanted to make it a big deal. From the outside it’s easy to say whatever you want to say about it, but it’s all perspective.
“If it was just a way for us to learn some new things about ourselves and our team and then use it looking forward deeper into the (Olympic) qualifying year, then it’s a blessing in disguise, really.”