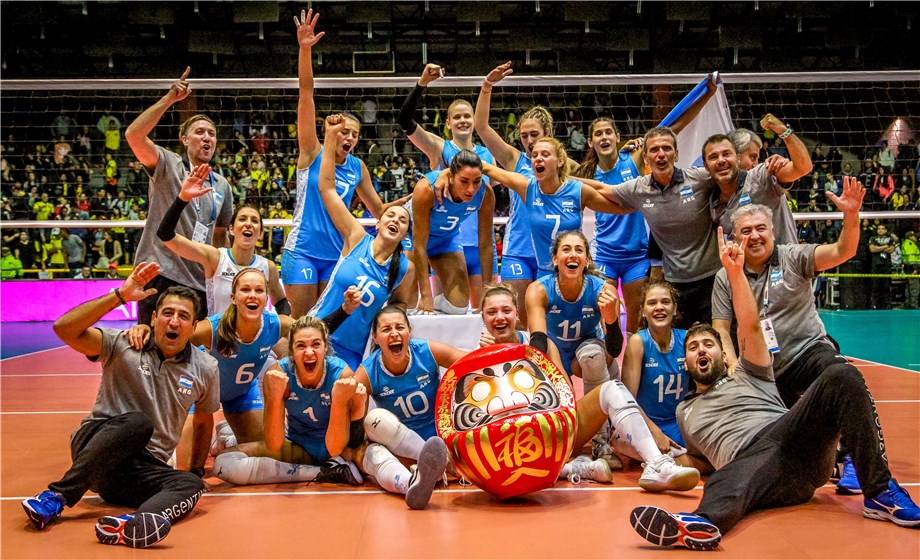 Argentina celebrate with the Daruma doll they received for qualifying to the Tokyo 2020 Olympic Games.

Lausanne, Switzerland, January 9, 2020 - Argentina and Kenya picked up the South America and Africa tickets to the women's volleyball tournament of the Tokyo 2020 Olympic Games, while in Europe Poland and Germany joined the Netherlands in the top four and in Asia the semifinal matchups were confirmed after Thursday's action in Olympic qualification tournaments across the world.
Argentina and Kenya join Serbia, China, USA, Brazil, Russia and Italy who had already qualified since last August through an intercontinental process, plus Japan who had secured their spot by default as hosts of the Tokyo 2020 Olympics.

The last three tickets to complete the 12-team Olympic lineup will be handed out this weekend in the remaining continental qualifiers.
South America
Argentina came back from a set down and held off Colombia for a 3-1 (16-25, 25-21, 25-16, 25-23) win in Bogota that brings them to the Olympic Games for the second time in history.

Hosts Colombia, inspired by their 7,000-strong partisan home crowd, made a last-ditch effort to force a tie-break, closing in from 23-17 and 24-20 to come within a point of drawing level in the fourth, before Elina Rodriguez thundered the last ball from the right to the far corner to wrap it all up.

Rodriguez was top scorer of the game with 20 points, just two more than teammate Daniela Bulaich who came in off the bench only during the second set. Amanda Coneo was Colombia's top scorer on 14 points.


Previously in Bogota, Venezuela had shut out once mighty Peru 3-0 (25-18, 25-22, 25-23) to finish third in the four-team South America pool. Winderlys Medina had the match high in scoring with 15 points for Venezuela, with Brenda Uribe following close on 14 for Peru.
Africa
Kenya very efficiently downed Nigeria 3-0 (25-15, 25-21, 25-12) to finish undefeated in the five-team single pool of the Africa qualifiers and earn the continent's spot in Tokyo 2020.
Kenya return to the Olympics after a hiatus of 16 years for their third appearance at the ultimate sporting event of the world - more than any other African country. The Malkia Strikers ranked 11th at Sydney 2000 and Athens 2004. 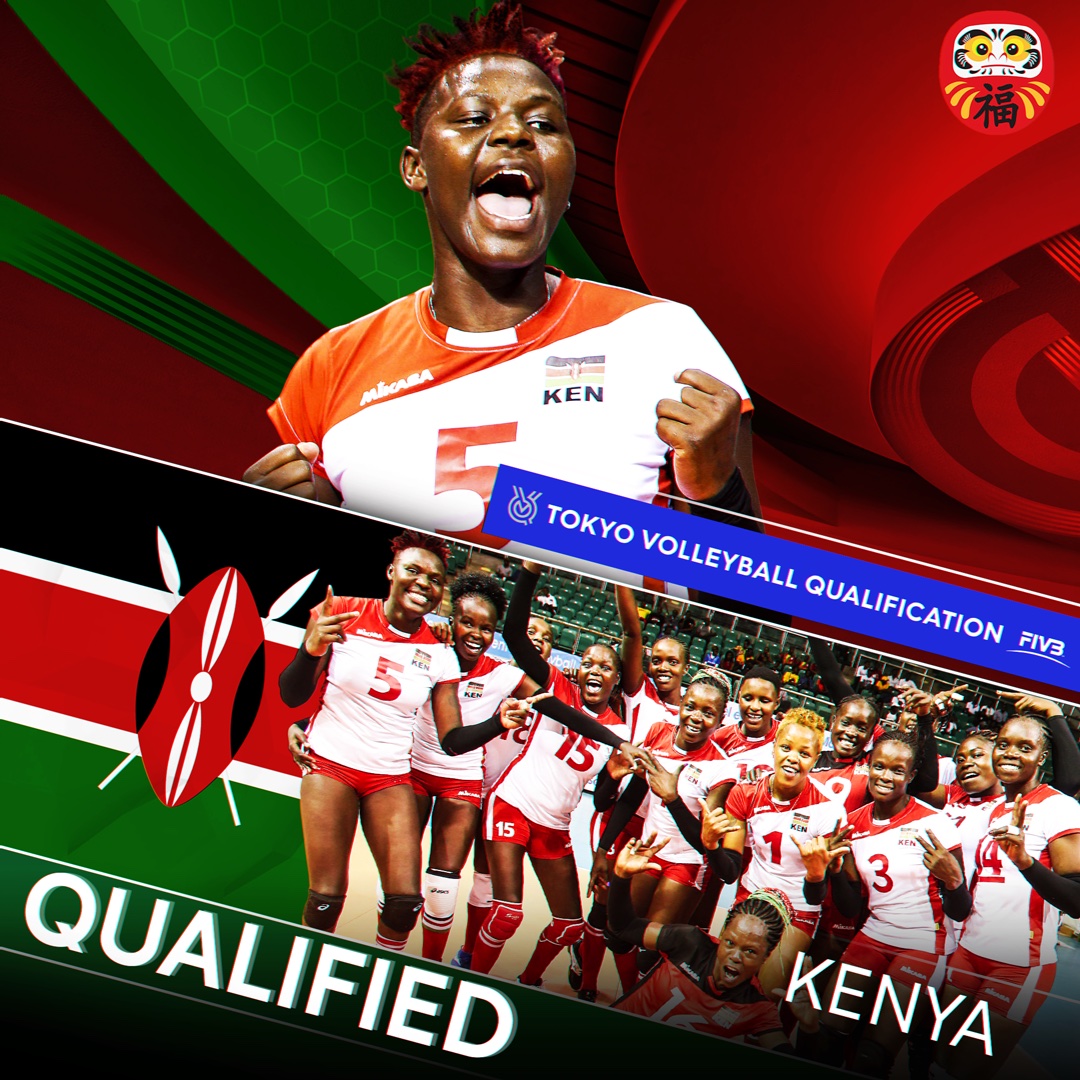 Sharon Chepchumba was Kenya's best scorer in the game with 11 points, as Mercy Moim and Edith Mukuvilani added another 10 each. It was practically no contest from Nigeria, who were outserved 7 to 1, outblocked 12 to 6, but also lacked in attacking efficiency 38% to 25%.

Europe
Poland made the last four of the European qualifier in Apeldoorn with a 3-1 (25-20, 25-23, 23-25, 25-23) win over the Netherlands - the latter having already secured their spot in the semifinals since the previous day.

Poland were lifted by 25 points from Malwina Smarzek and 21 by Magdalena Stysiak and were generally more efficient than the Dutch in the back row.

Previously, Belgium had survived a mighty scare early in the match, but came from behind to edge Croatia 3-1 (20-25, 28-26, 25-16, 25-22) and set themselves up for a deciding match against Turkey on Friday for the last remaining berth in the semifinals in Apeldoorn.

Croatia missed two chances to go two sets up with set points at 24-25 and 25-26, before Belgium made a three-point run to equalise.

Britt Herbots was again Belgium's top scorer with a match high of 27 points, including five aces. Samanta Fabris with 20 for Croatia was the only other player to score in the 20s.

The result leaves Croatia winless after two games and out of contention, but also means Germany secure their semifinal berth (without playing on Thursday), to be joined in the last four by either Belgium or Turkey.

And Bulgaria completed their pool play obligations in Apeldoorn with their first win in the tournament, dispatching Azerbaijan 3-1 (25-23, 25-19, 21-25, 25-22) with Aleksandra Milanova bagging 20 points and Gergana Dimitrova 16 more. However, Azerbaijan's Yelyzaveta Samadova was top scorer of the game with 23 points.

Asia
Semifinals were set at the Asia qualifiers in Nakhon Ratchasima as pool play wrapped up, with Thailand and Chinese Taipei picking up the last two tickets on Thursday.

Teams take a break on Friday at Nakhon Ratchasima, ahead of Saturday's semifinals which are followed by the deciding match on Sunday. 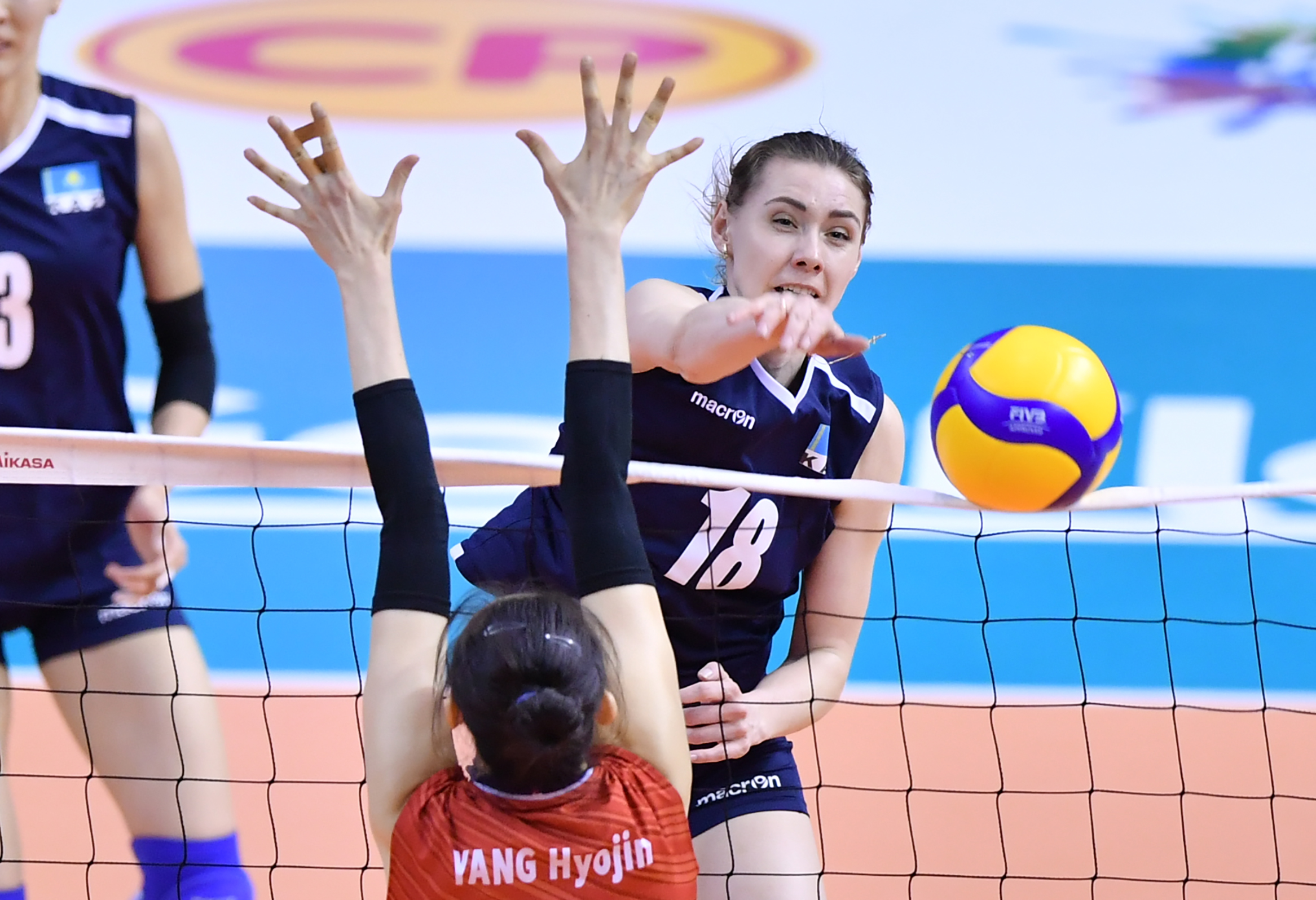 With a bit of help from the net, Kazakhstan's Kristina Anikonova gets past the block of Korea's Yang Hyo Jin as pool play winds down in Nakhon Ratchasima at the Asia qualifiers for the Tokyo 2020 Olympic Games.

Korea swept Kazakhstan 3-0 (25-20, 25-16, 25-21) to clinch pole position in Pool B, undefeated after three matches, though both teams had already advanced to Saturday's semifinals.

Trailing by six points in the third, Kazakhstan made a desperate attempt with a 6-0 run to draw level at 18-18 and even led briefly before Korea regained control and wrapped it all up with a 5-1 run of their own from 20-20.

Lee Jaeyeong was top scorer of the game with 16 points for Korea, who countered Kazakhstan's blocking output (7 to 3) with a highly more efficient attack (47% to 37%). Sana Anarkulova was Kazakhstan's top scorer on 12 points. 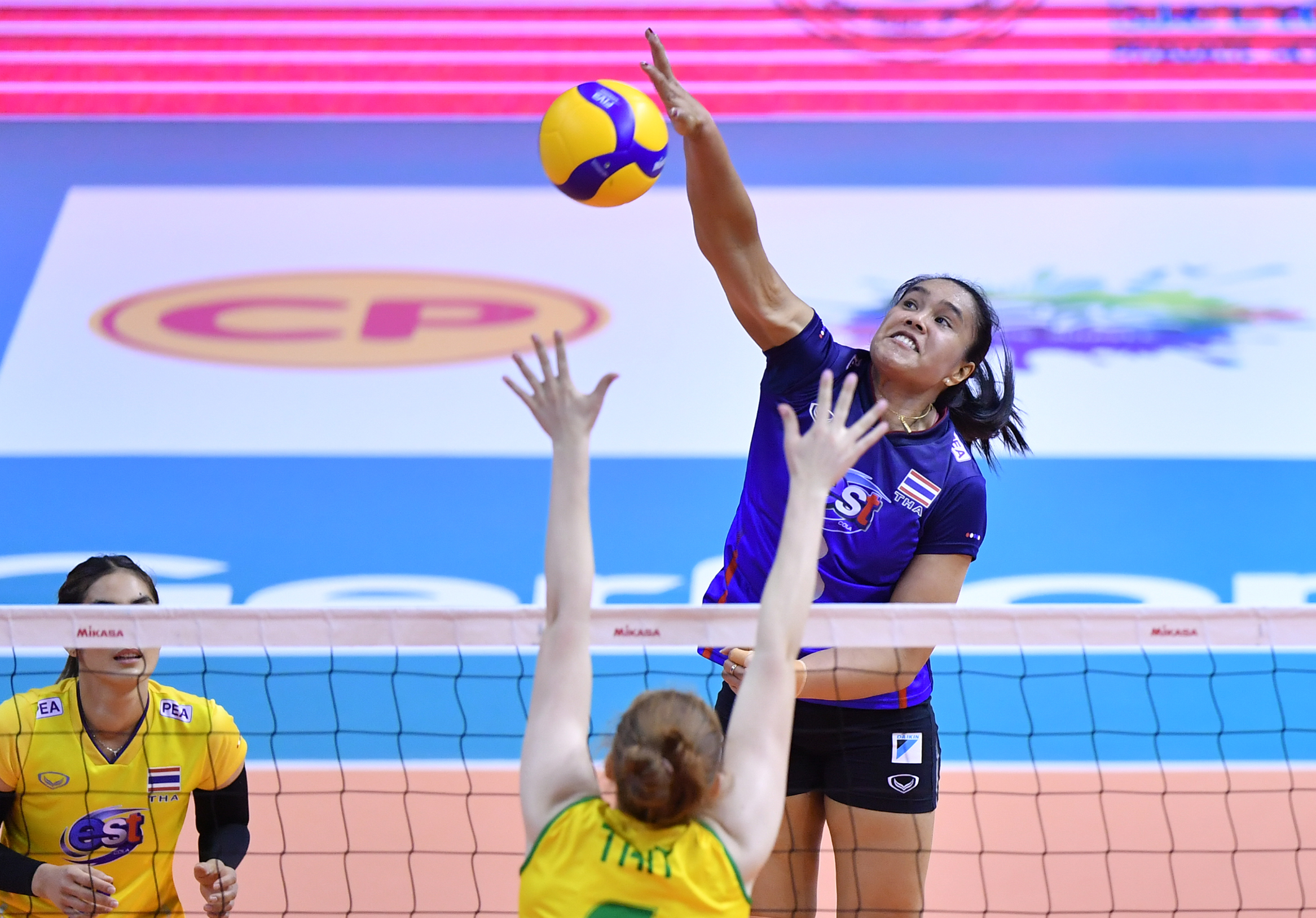 Onuma Sittirak hits past the Australia block of Jennifer Tait as she helps lift Thailand to the semifinals of the Asia qualifiers for the Tokyo 2020 Olympics.

Thailand's Onuma Sittirak with 14 points and Pimpichaya Kokram with 12 were the only two players in the game to score in double digits as the hosts totally dominated their opponents. 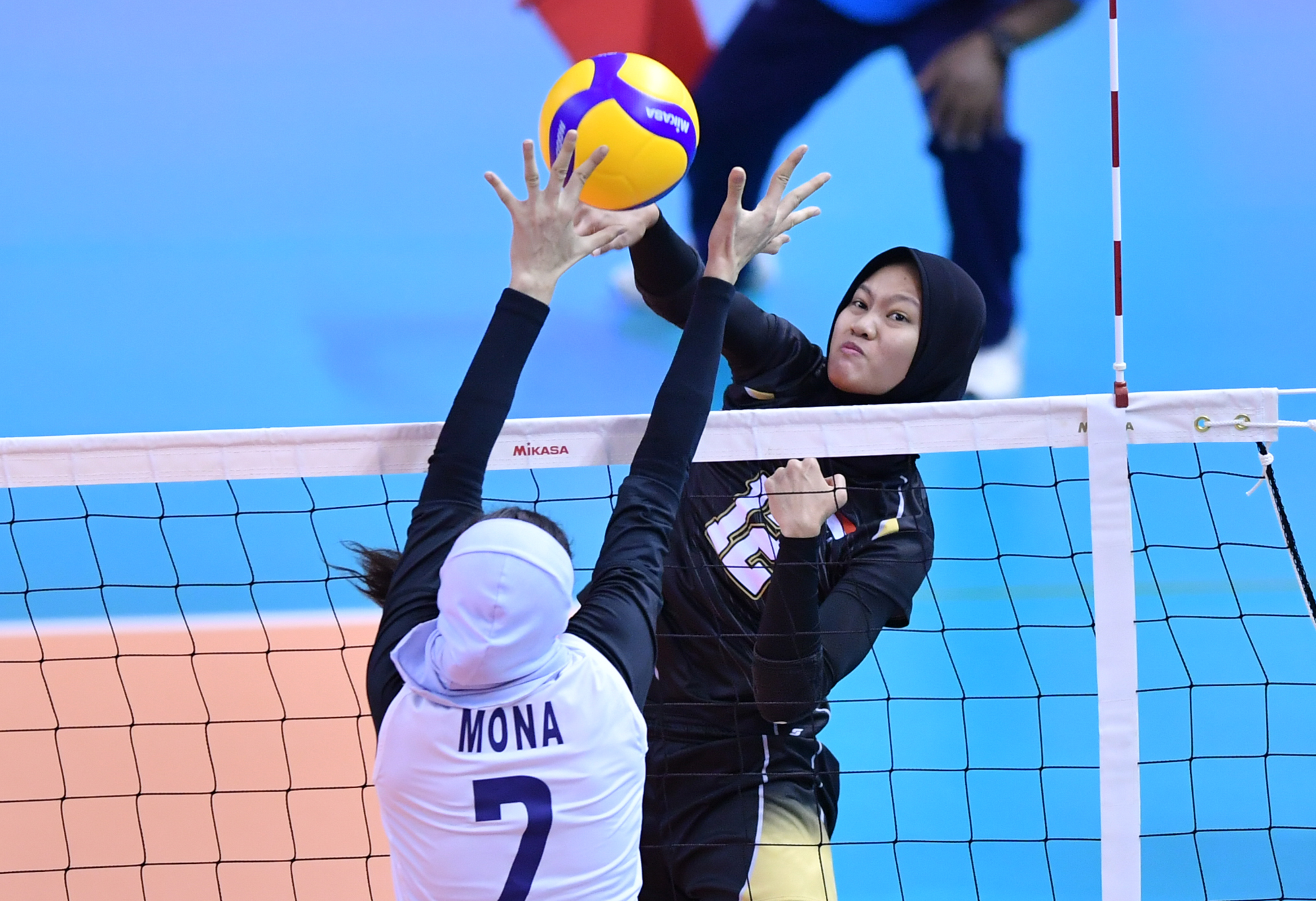 Indonesia's Arsela Nuari Purnama hits against the block of Iran's Mona Ashofteh as the two top scorers of the game go one-on-one at the Asia qualifiers for the Tokyo 2020 Olympic Games.

Everyone from both sides got at least a bit of time on court as Arsela Nuari Purnama topped the scorers list with 24 points (including four aces) for Indonesia. Mona Ashofteh was Iran's best scorer on 18.

Full schedules of all the continental qualifiers for Tokyo 2020: