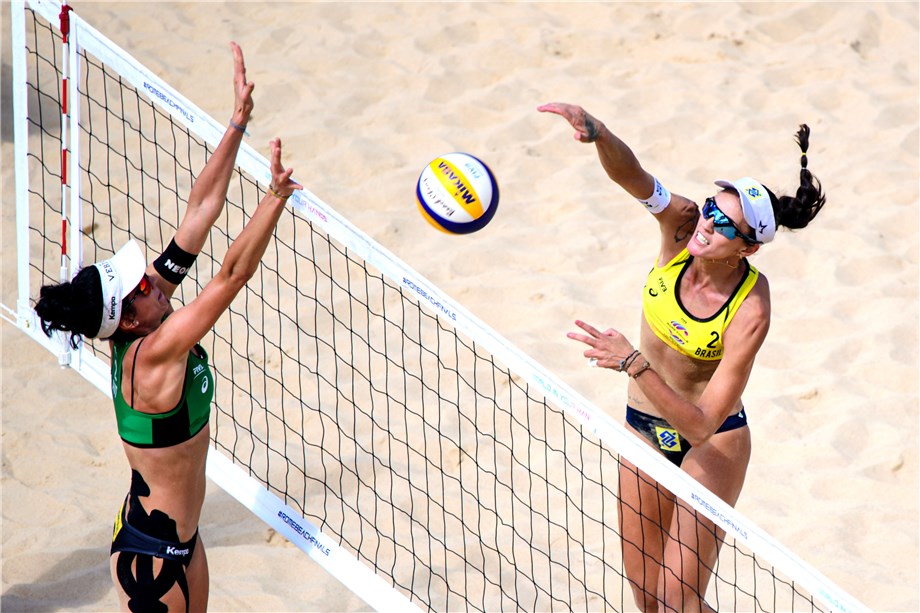 Rio de Janeiro, Brazil, March 25, 2020 – Playing beach volleyball is not Fernanda Berti's only talent. With the same hands that hit balls to the sand and block opponents at the net, the 34-year-old Brazilian has taken to expressing her creativity on canvas in her free time.
A former volleyball player who transitioned to the beach in 2012, Fernanda's passion for art goes back a long way.

“It all started when I was really young,” she reflected. “I always loved drawing and I was one of those kids who would play with a pen and paper for hours. When I was 17 I decided to start painting in my free time, so my godmother and my aunt, who are both professional artists, helped me to figure out what I needed to get started and it just went from there.”
Her first paintings were gifted to friends and their positive feedback provided further encouragement. She has now hosted a few exhibitions of her work in Rio de Janeiro, where she lives. Her main source of inspiration, she says, is music, but she also creates pieces based on other subjects.
The blocker, a silver medalist at the 2015 FIVB Beach Volleyball World Championship, tries to include some of her own traits in her work, and says that painting has had a very positive impact on her personal development.
“I admire several different artists but one thing you can easily tell about my paintings is that I like to use a lot of colours,” she said, laughing. “I feel that my art reflects my mood and my personality in a certain way. And it works as therapy too. Sometimes I get home stressed out about something and I start painting and it really calms me down. I can stay there for hours. For high-performance athletes, who have to deal with a whole lot of pressure every single day, it can work as a great source of relief.”
After playing alongside Rio 2016 Olympic silver medalist Bárbara Seixas for the last three years, Fernanda started the 2020 season with Taiana Lima, who was her partner in the silver medal campaign in The Hague in 2015. Since their reunion, the team have won two bronze medals in three events played on the Brazilian Tour.
More beach volleyball from Brazil:
Mari and Paula Pequeno are learning their beach lessons
Andre and George secure 2019-2020 Brazilian Tour title
Larissa announces comeback to partner with wife Lili
Agatha/Duda and Evandro/Bruno claim first 2020 golds
Rebecca/Ana Patricia and André/George victorious on Brazilian Tour
Quick links:
FIVB Beach Volleyball World Tour
Facebook
Twitter
Instagram