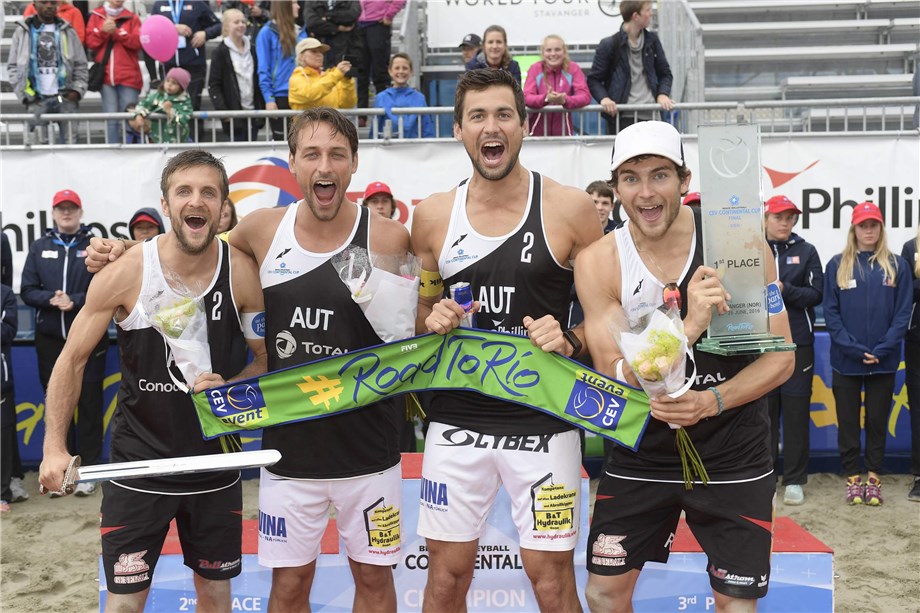 Stavanger, Norway, June 26, 2016 - Two Austrian men’s teams will travel to the Rio 2016 Olympic Games this August after Alexander Huber and Robin Seidl won the ‘Golden Match’ with Belgium to book another berth for their country as five exciting days of action concluded at the 2014-2016 CEV Beach Volleyball Continental Cup Final in Stavanger on Sunday.


Huber and Seidl stormed to a 21-19, 21-17 victory over Belgium’s Dries Koekelkoren and Tom van Walle, who suffered their first loss since they travelled to Norway’s beach volleyball capital earlier this week.
Koekelkoren and van Walle will have one last shot at fulfilling their Olympic dream in less than two weeks when they travel to the FIVB World Continental Cup Olympic Qualification in Sochi, Russia from July 6-10.
Austria, however, will be delighted with the result, and the two teams to represent them will be confirmed by the Austrian Olympic Committee at a later stage.

Earlier on Sunday Russia’s tandems regrouped after losing to Austria in the semifinals to finish the tournament in third place by recording two straight wins in their match-ups with Spain. Russia will be trying to qualify a second team for the Rio 2016 Olympics – next to the berth won by this year’s European Championship silver medallists Konstantin Semenov and Viacheslav Krasilnikov – when contesting the FIVB World Continental Cup Olympic Qualification on home turf.

Belgium and Austria delivery classy fight for ticket to Rio

Dries Koekelkoren and Tom van Walle extended their winning streak at Stavanger to seven straight matches by claiming the first act of the ‘grand finale’ with Austria. However, they were made work hard for it as they fought for three sets before eventually edging Thomas Kunert and Christoph Dressler 21-17, 18-21, 15-12. Koekelkoren and van Walle mastered the game very well in the first set leading by as many as five points at 13-8 and 16-11 and even though their rivals improved the quality of their performance as the match progressed, the ‘Beach Red Dragons’ were in full control through to the end (21-17).

The match was an enjoyable one for the audience in attendance with many long rallies, especially in the second set where Koekelkoren and van Walle trailed early on before levelling the score at 7-all. Kunert and Dressler, however, found the right way to disrupt their opponents and deservedly won the second set 21-18 after missing out on two set balls.

Van Walle and Koekelkoren regrouped and upped their performance in the tie-break that followed, playing with much composure and resilience even though they called a timeout at 13-12 as their advantage was reduced before they scored two more points to finish it all off at 15-12.

“It did not really matter to us if we had to play the first or second match of this tie,” Koekelkoren commented afterwards. “I was just extremely focused on this match and on playing the best I could. At some point we realised that our tactics were not working as much as I was hoping and we started arguing with Tom about what to do. In the end we found the right solutions and we are obviously happy with this victory. Now I just hope that Robin [Adriaensen] and Bob [Douwen] will get the job done by winning their match.”

Koekelkoren’s wish was not fulfilled as Austria’s top team in the tournament, Huber and Seidl, comfortably won their clash with Douwen/Adriaensen 21-13, 21-18 to shape up a ‘Golden Match’ in order to determine the eventual winners of the Continental Cup Final and of the much coveted ticket to Rio.

“It feels amazing and I simply cannot find any words to describe my feelings,” Seidl said. “We have been working and fighting for the achievement of this ultimate goal for four years and we finally made it happen! I really have no words, I am absolutely thrilled and proud that we achieved this goal by sticking together, through the ups and downs we have had, and by staying together as a team."

The achievement of any athlete’s ultimate dream was at stake on Sunday afternoon when Koekelkoren/van Walle and Huber/Seidl found their way – one last time – to the iconic centre court set up on the Market Square of Stavanger.

The match soon turned into an uphill climb for the ‘Beach Red Dragons’ as found themselves ahead only twice in the opening set – at 1-0 and 2-1. They were forced to chase their opponent throughout and could only level the score once at 16-all. Huber and Seidl were delivering the perfect match, winning the first set 21-19.

The second set was more demanding for Koekelkoren and van Walle – Huber and Seidl soon edged ahead 6-3, and at 12-8 they seemed to be en route to securing a ticket to Rio. However, van Walle and Koekelkoren showed their resilience, fighting back to 16-all and prompting an Austrian timeout. Still the Austrians succeeded in almost everything they attempted to produce and their well-deserved victory followed suit at 21-17.

This success is especially important for Huber, who four years ago played a major role in securing an Olympic quota place for Austria at the FIVB World Continental Cup Olympic Qualification in Moscow, but missed out on a London 2012 adventure as Clemens Doppler and Alexander Horst were chosen to play at Horse Guards Parade in London.