Baden, Switzerland, August 23, 2020 - Mirco Gerson and Adrian Heidrich of Switzerland were in position here Sunday to secure Switzerland's first-ever sweep of the gold medals for both genders at a FIVB World Tour event, but Robin Seidl and Philipp Waller spoiled the effort in claiming Austria's third-straight men's title at the third annual tournament. 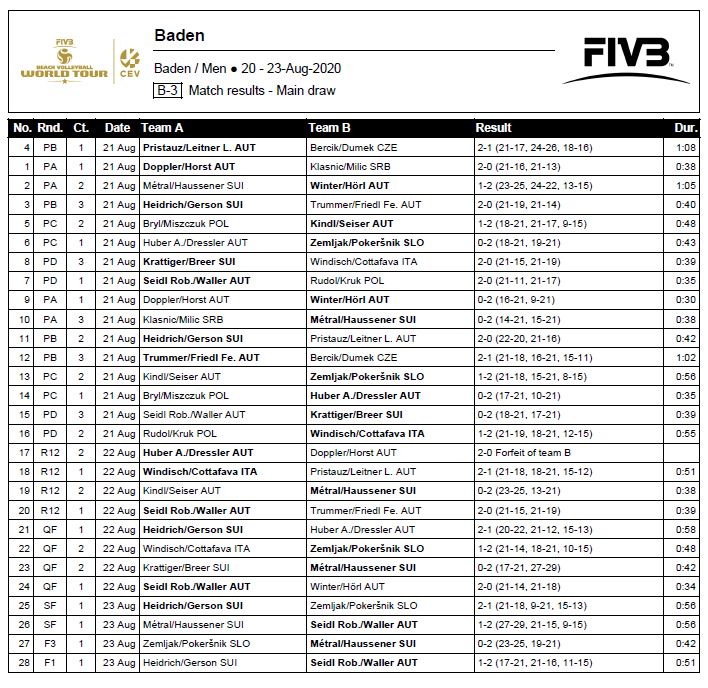 Austrian Olympian Clemens Doppler and Alexander Horst had topped the podium at the first two Baden Opens in 2018 and 2019.  Seidl and Waller, who placed ninth together at the 2018 Baden Open, are now 2-0 against Gerson and Heidrich after defeating the Swiss pair in pool play at the 2018 Vienna Major.
Sunday's men's finale also put the FIVB World Tour gold medal meetings between the two countries at 1-1.  Gerson and Heidrich, the younger brother of Joana, defeated Martin Ermacora and Moritz Pristauz-Telsnigg of Austria 2-0 (21-13, 21-16) in a 34-minute FIVB finale on November 3, 2019 at Qinzhou, China.
While Seidl and Waller were winning their second World Tour gold medal in their 20th FIVB appearance together after collecting their first tile in July 2018 at Haiyang, China, Betschart and Huberli were winning a tournament for the first time in their 43 international starts together.  The pair's best previous finishes were four thirds with the last bronze medal being collected in August 2018 at Moscow.
In the women's finale, a finger injury by Joana Heidrich on a blocking attempt ended the match as Betschart and Huberli were leading 3-1 in the second set after winning the first 21-15.  It was only the third FIVB World Tour meeting between the two teams as Heidrich and Verge-Depre won the first two matches in July 2017 in the Poland (Olsztyn) and June 2018 in the Czech Republic (Ostrava).> 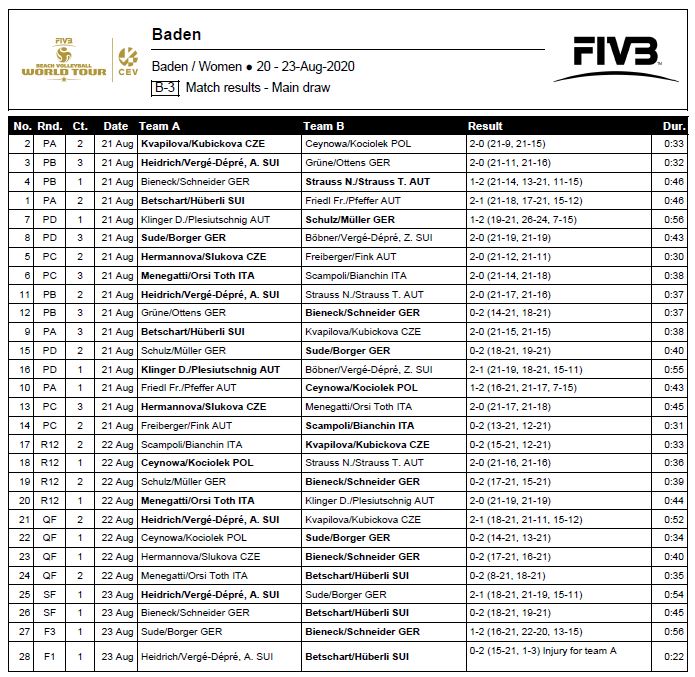 Switzerland was seeking to become the seventh country to win both men's and women's at the same FIVB World Tour event.  Brazilians pairs accomplished the feat 60 times with Americans topping the podium at the same event 15 times.  Austria, China, France and Russia men's and women's winners once each at the same tournament.
The FIVB World Tour continues this week with a men's event in Montpellier Open starting Tuesday with a qualifier with the finals set for Saturday.  September events on the 2019-2020 FIVB World Tour calendar are scheduled for Lithuania (Sept. 10-13, Vilnius) for both genders and Cyprus (Sept. 25-27, Larnaka) for women.
This website uses cookies to ensure you get the best experience on our website. For more information please read our Cookies Policy.
Ok