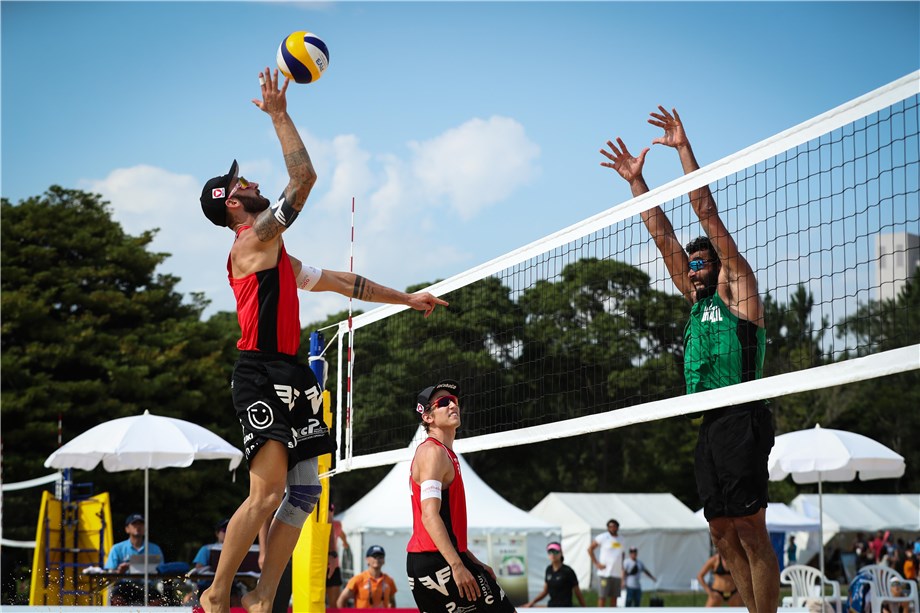 Tokyo, Japan, July 24, 2019 - Austrians Tobias Winter and Julian Horl defeated three opponents, including two on the sand, here Wednesday at Shiokaze Park to lead seven other teams from five countries in qualifying for the main draw at the $300,000 Tokyo Open.
Quick links - Beach volleyball:
FIVB Beach Volleyball World Tour - Tokyo
FIVB.com - Beach volleyball
Facebook
Twitter
Instagram
With the FIVB World Tour event serving as a dress rehearsal for the beach volleyball competition for the Tokyo 2020 Olympic Games, the 15th-seeded Winter and Horl posted qualifying wins on Wednesday over pairs from host Japan and Brazil to gain a spot in Thursday's opening pool play rounds.
After scoring a 2-0 (21-17, 21-14) win in 35 minutes over 18th-seeded Hitoshi Murakami/Takashi Tsuchiya of Japan in the first round of elimination on Wednesday morning, the Austrian pair recovered three hours later to score a 2-0 (21-16, 22-20) victory in 38 minutes over second-seeded Vitor Felipe/Pedro Solberg of Brazil.
"What a great day for us," said the 25-year-old Winter. "It was hot and humid out there and we were able to handle the conditions to post two wins. We have so much respect for the Brazilians, so this is a great win for us."
When asked about handling the pressure at the end of the second set, Winter credited his 27-year-old partner Horl "for making big plays at the end of the set when we were trailing 19-18. They also made two big hitting errors. We just stayed calm and were able to handle the pressure at the end of the match."
Winter said: "We struggled recently in qualifying for the big four- and five-star events on the World Tour, so advancing to the main draw this week is important. Now we can relax and prepare for tomorrow's competition."
Prior to this week, Winter and Horl had lost in the first round of the qualifiers at four-star events this season in Qatar and China with their best finishes being ninths at two-star tournaments in Turkey and China, and a ninth last week at the three-star Edmonton Open in Canada.
China and Germany qualified two teams each from Wednesday's qualifier along with pairs from Brazil, France and the United States. Advancing for China were fifth-seeded Peng Gao/Yang Li and eighth-seeded Likejiang Ha/Jiaxin Wu. The German qualifiers were sixth-seeded Nils Ehlers/Lars Fluggen and seventh-seeded Philipp Bergmann/Yannick Harms. 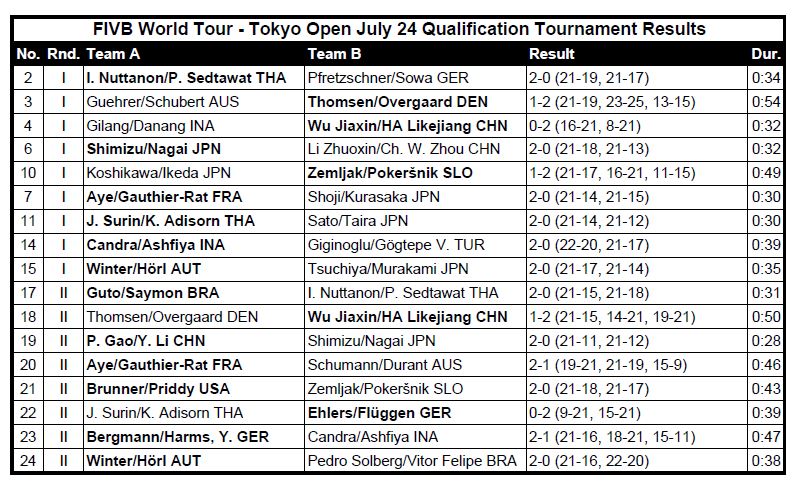 Other qualifying teams on Wednesday were top-seeded Saymon Barbosa/Gustavo "Guto" Carvalhaes of Brazil, third-seeded Theo Brunner/Reid Priddy of the United States, 13th-seeded Quincy Aye/Arnaud Gauthier-Rat of France.
The FIVB World Tour event continues through the weekend with the men’s and women’s finales being played Sunday at Shiokaze Park where the winning pairs will net the $20,000 first-place prizes along with gathering 800 points qualifying points for the Tokyo 2020 Olympic Games.