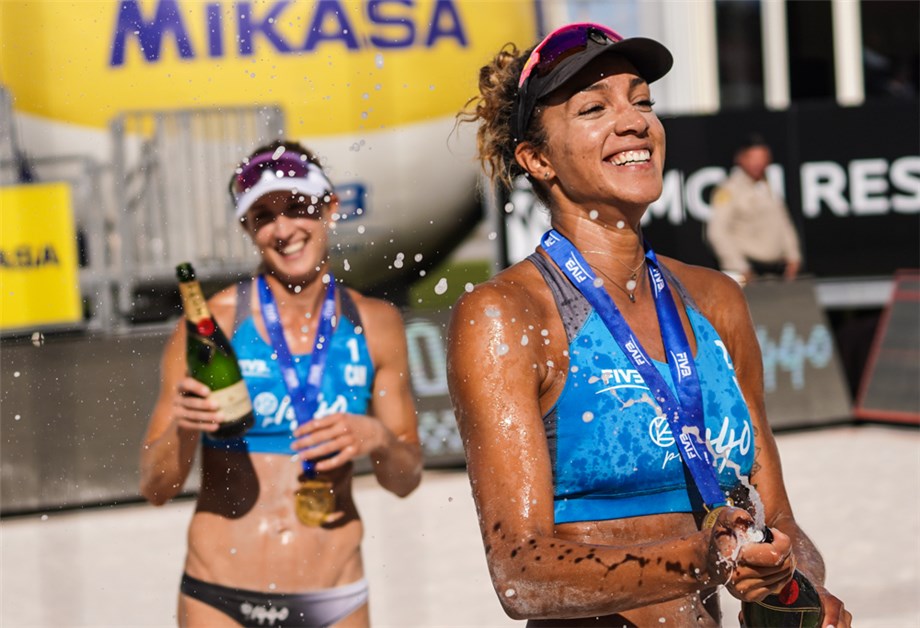 Las Vegas, USA, October 21, 2018 – Heather Bansley and Brandie Wilkerson came out on top in the all-Canadian gold medal match at the FIVB Beach Volleyball World Tour Las Vegas Open presented by p1440 on Sunday and won their first title in the 2018-2019 World Tour season. Bansley and Wilkerson needed three sets in a 2-1 (21-17, 17-21, 15-9) victory to take down Melissa Humana-Paredes and Sarah Pavan in the final game of the event held at the American resort city.
Carolina Salgado and Maria Elisa Antonelli secured the bronze medal after their opponents, fellow Brazilians Rebecca Silva and Ana Patricia Ramos, had to retire from the game when Ana Patricia sustained a left ankle injury during the second set.
Basnley, 31, and Wilkerson, 26, are in great form as after getting together at the end of the 2016 season, they have stepped onto a podium in five of the last eight World Tour events they have played at – including another gold in Poland, a silver and two bronze medals. They also claimed medals at the p1440 invitational event in San Jose and at the NORCECA Championships in the Dominican Republic over the last few months.
In Las Vegas, the Canadians came back stronger after a tough stretch at the end of the second set to dominate the tie-breaker.
“We’re really motivated to keep doing well,” Wilkerson commented. “The key was staying together. It’s just the two of us in the court and our coach has prepared us as much as he could. We’re ready for anything and those kinds of things happen. I think we handled it pretty well, we were very positive and energetic. It’s a new set at the end of the day and you can’t let those mistakes get to you.”
The Canadians are also slowly reversing their unfavourable record against Pavan and Humana-Paredes. After winning the first meeting between the teams, in 2016, Bansley and Wilkerson lost the next four, three of them in straight sets. The series now stands at 4-3 to in favour of Pavan and Humana-Paredes, after Bansley and Wilkerson also beat their compatriots in the quarterfinals of the NORCECA Championships three weeks ago.
“I think it’s a mix of us figuring out their game a little better and also getting better as a team”, Bansley remarked. “We’ve put in a lot of hard work this season and we’ve seen ourselves improving. We’re just getting smarter in the court. But we scouted them and took it as any other game. We focused on what we could do well and it worked.” 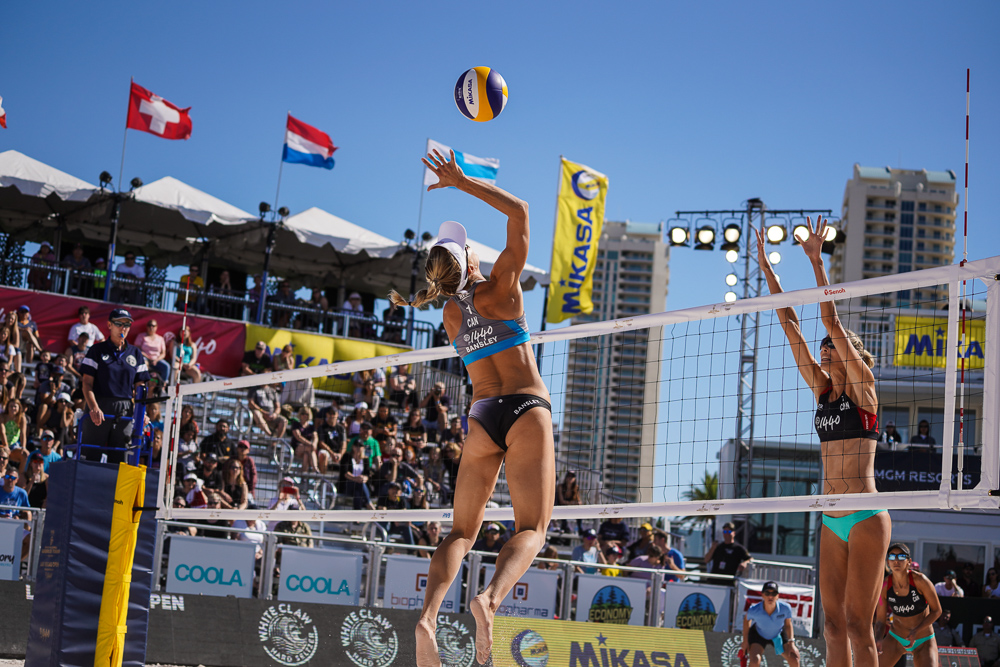 Bansley spikes against Pavan's block in the all-Canadian final
Maria Antonelli and Carolina take bronze
The bronze medal match of the Las Vegas Open didn’t run until its end as Ana Patricia twisted her left ankle after she landed from a block with the score tied at 16 in the second set – Rebecca and her had won the first set 21-19. The 20-year-old blocker tried to return to the game but eventually gave up when her opponents had a 20-17 lead.
For Carolina and Maria Antonelli, who collected three silver medals last season, it was the first medal in 2018-2019 and a very important one.
“This is a very important medal for us,” Carolina explained. “We had a great year, but we lost several medal games, so we wanted really bad to win this one. Unfortunately the match ended in a sad way. We are all feeling bad, but it’s part of the sport. I had the same kind of injury earlier this year in Poland and I know how hard it is. I hope she recovers fast and she’s a very physical player, I’m sure she’ll be back stronger.”
The World Tour continues next week for the women as competition moves to Chetumal, Mexico, for a single-gender three-star even from October 24-28.
Quick links - Beach volleyball:
FIVB Beach Volleyball World Tour - Las Vegas
FIVB.com - Beach volleyball
Latest Videos
Facebook
Twitter
Instagram