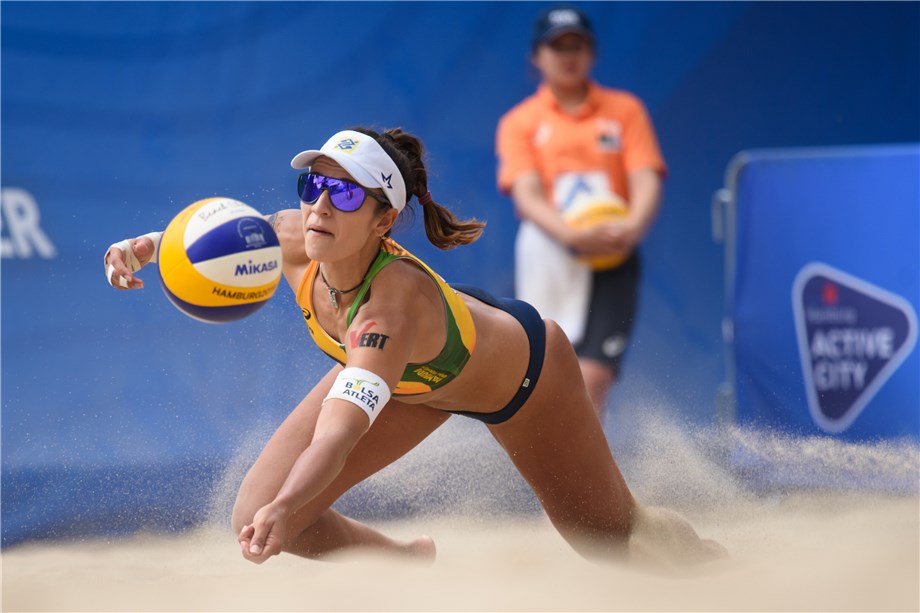 Barbara Seixas of Brazil at the 2019 FIVB World Championships in Hamburg, Germany

Rio de Janeiro, Brazil, August 3, 2020 - After spending her past three birthdays in Vienna, Barbara Seixas has the opportunity to spend her 33rd at home, but the World Championship beach volleyball player would much rather be traveling and celebrating.
Quick links:
FIVB Beach Volleyball World Tour
Olympic Games Tokyo 2020
Facebook
Twitter
Instagram
Youtube
"As much as I appreciate being home for my birthday, I love playing and competing in my sport!" said Barbara, the 2015 FIVB world champion with Agatha Bednarczuk. "The challenges keep me motivated and eager to improve. For sure I would give anything to be playing in Tokyo now representing my country.” 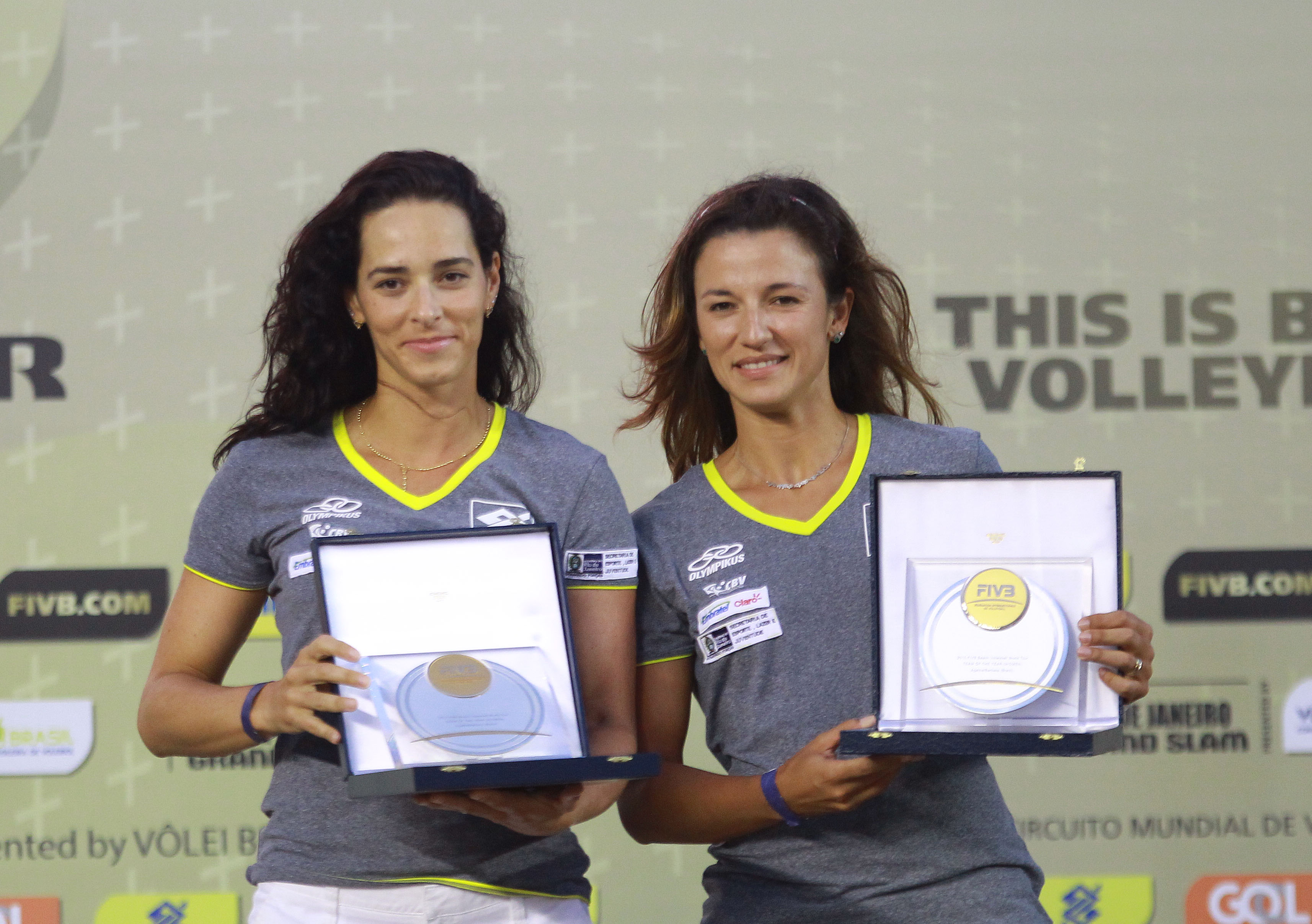 Brazilians Agatha Bednarczuk (left) and Barbara Seixas with their 2015 World Championship awards at a March 2016 event in Rio
Barbara was asked about her future as she has been competing internationally since 2003 with 10 gold medals to her credit ,starting with three junior World Championships in 2005, 2006 and 2007.
"Honestly, I am trying to allow myself to figure it out," said Barbara, who captured the silver medal four years ago at the Rio 2016 Olympic Games on home sand with Agatha. "I have plans for having kids and building a family. I am also trying to improve the sport outside the court and motivate myself with more short terms goals, reinventing everyday with new trainings, and now with a new staff and partner it has given me more challenges to achieve on an everyday basis."
Barbara added that she "used to think I had everything planned for my life, and as the time goes by, I see how much I still have to live and experience the uncontrollable. So, it is natural to question yourself every now and then and it's normal not to have plans for everything every time, and right now I am okay with that. I am having great fun with my new partner Carolina Horta, and hope to help her achieve more and more goals and success in her life."
As for her birthday, Barbara will celebrate today "with my family. We always try to spend special dates together reunited."
Barbara says she has been "at home during these difficult times. I am so grateful for myself and my family’s health, so I tried to stay as fit as I could, mentally and physically, did exercises at home, also applied for online study courses as well, related and non-related to sport."
Two years ago, on her birthday in Vienna, Barbara and Fernanda Alves captured a pair of matches to advance to the final four at the Vienna Major. When asked about any memories about those matches, especially a win over Brazilian rivals Agatha and Eduarda "Duda" Lisboa, Barbara said "honestly I don’t have memories from those matches.  I just remember that it was a special day because it qualified us to the semi-finals at a great event. Fernanda was making jokes about giving me the victories as a birthday present." 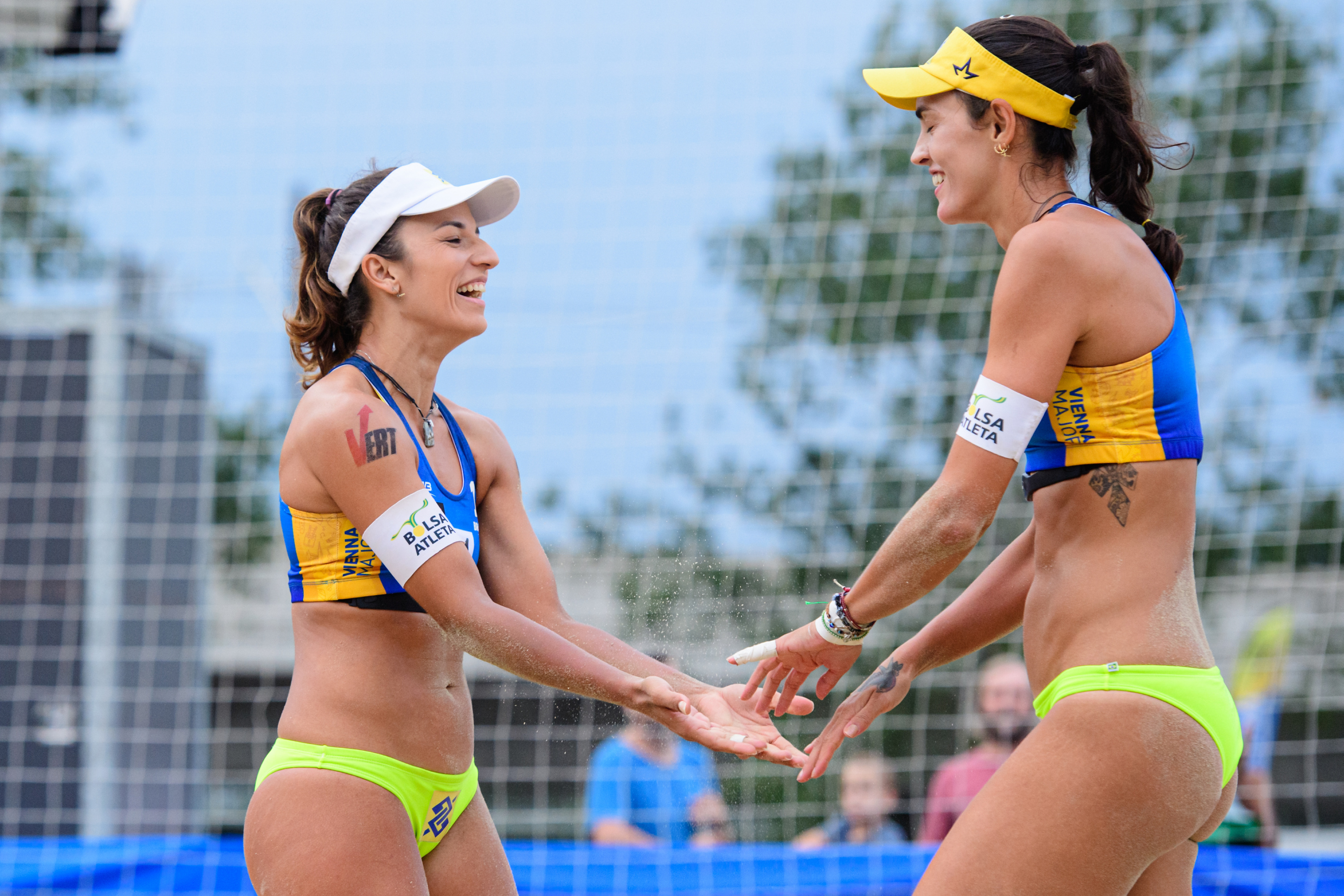 Barbara Seixas (left) celebrated her birthday in 2018 at the Vienna Major with Brazilian partner Fernanda Alves
As for all her travels, Barbara said "each place has its particularities. I like most of the events I have played, but the special ones start with my first World Tour medal in 2012 at Bang Saen (Thailand) and competing in my first senior World Championship in Poland where Lili Maestrini and I placed third."
In addition to winning the 2015 FIVB Beach Volleyball World Championships and claiming the silver medal at the Rio Olympics, Barbara listed FIVB World Tour events in Austria, Norway, Switzerland and the United States as other "memorable" sites for her.
"Gstaad was fantastic and keeps its dedication to the sport by hosting an event every year," said Barbara. "Klagenfurt was special for the fun atmosphere and engagement of the city with our sport. Stavanger, despite cold wind, is such an interesting place to host a beach volleyball event near the big ships and fjords. I loved playing in the United States where the sport has a successful history and great beaches like Fort Lauderdale." 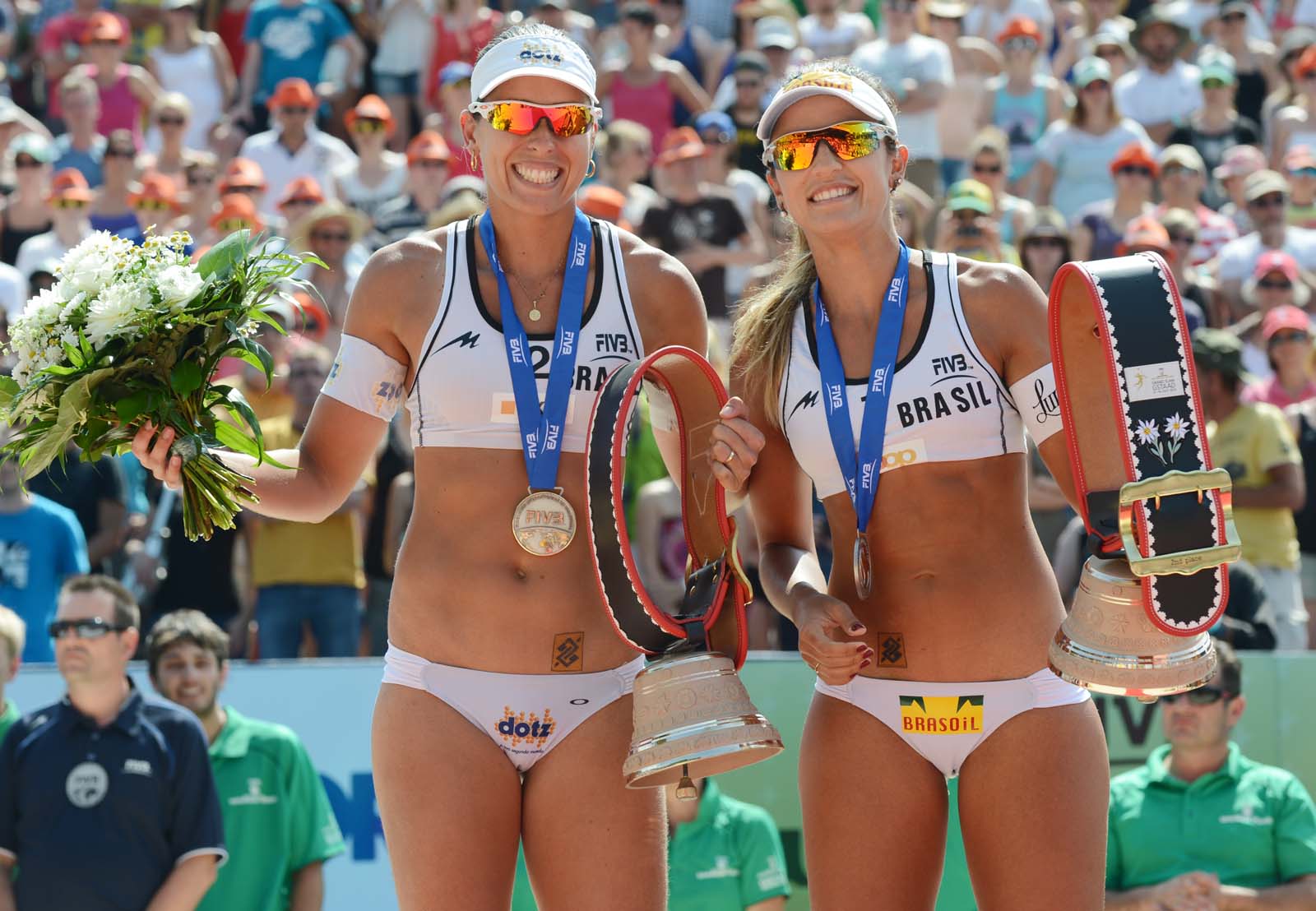 2013 Gstaad cowbells for Brazilians Liliane Maestrini (left) and Barbara Seixas
Barbara also said "the 2019 events were special for me in a certain way. It was a period that required all the mental strength that I had and more, after I had chosen to pursue my dream of a second spot for the Olympic Games with my fractured finger."
A winner of 27 medals in 89 FIVB events in 17 seasons of competition, Barbara said the fractured finger "happened at the Itapema event in Brazil. When I came back from the emergency room, I was so scared about the future and missing out on our chances for Tokyo.”
Speaking with a lot of emotion about the 2019 season, Barbara said “to talk about this brings tears to my eyes. It was such an important year for us, we have worked so hard for it. Everybody from my team was so supportive and caring, despite their concerns about my fractured finger.  I had to go on and adapt as I have never done before. I had to get used to physical pain and limitations in every game. With all that, it made me grow so much, to create more and more resilience, versatility and resistance inside and outside the court." 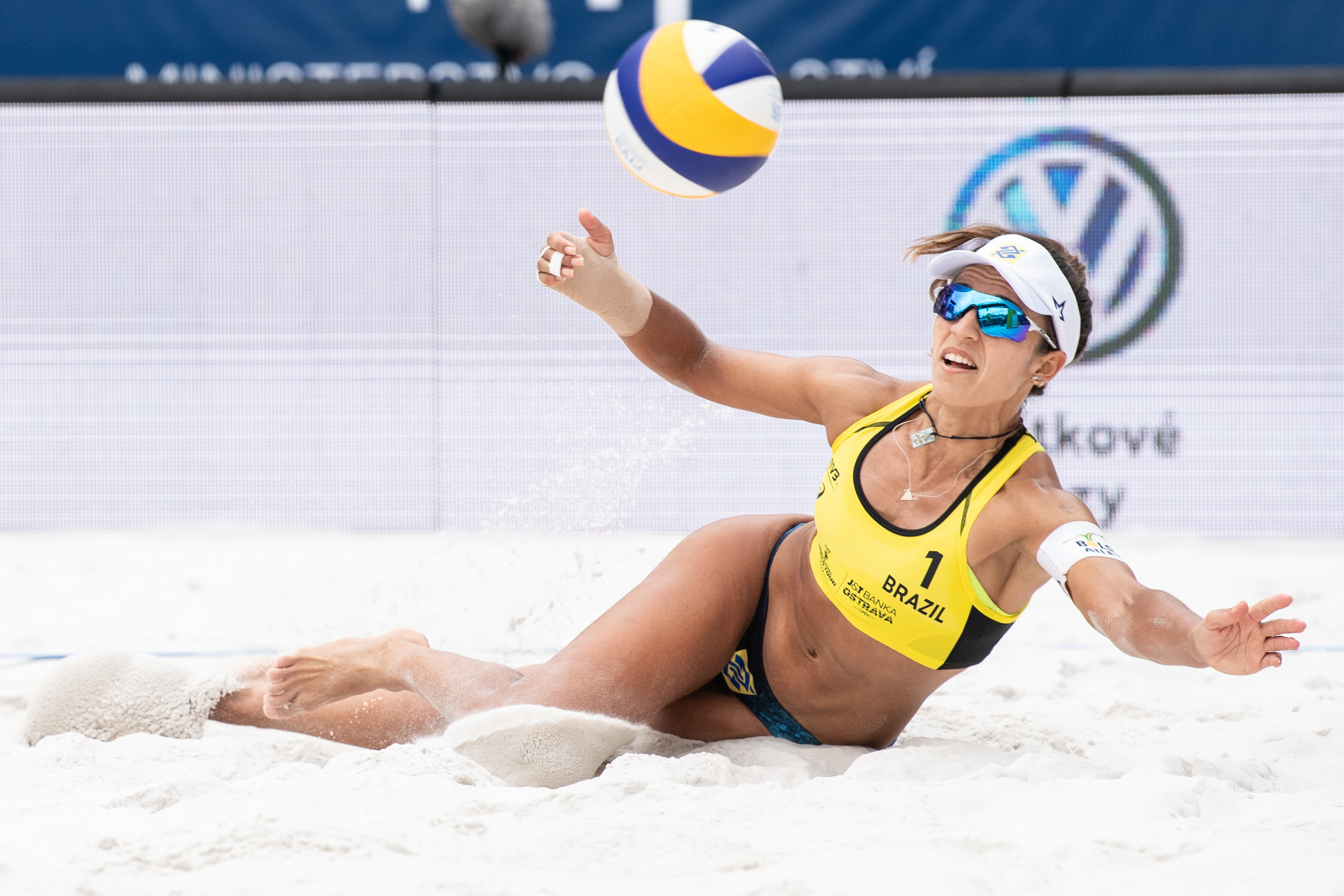 Barbara Seixas at the 2019 Ostrava event.
While hoping to return to playing in tournaments in the near future, Barbara said she is "doing a lot of crochet. It became quite a therapy for me. I am also studying about the stock markets and doing online courses for sports administration. And I still find time to meditate each day.”