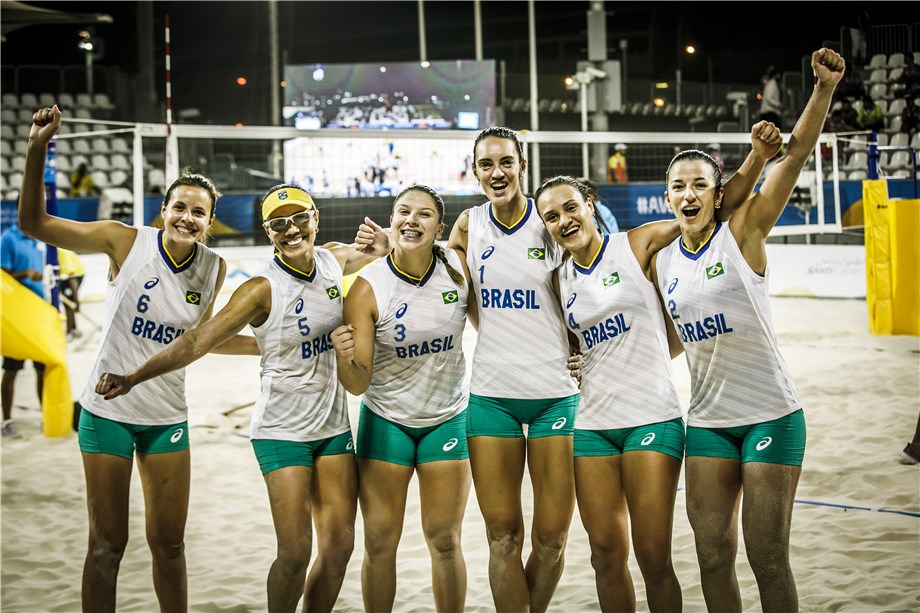 Doha, Qatar, October 16, 2019 – Right after the national team of Brazil secured their spot in the women’s beach volleyball 4x4 final at the 2019 ANOC World Beach Games in Doha, fivb.com spoke to three of the big stars on their squad to get their first impressions from the discipline’s debut on the international scene. All three of Barbara Seixas, Juliana Silva and Fernanda Alves agreed that the team spirit and the opportunity to play under the name of Brazil have contributed to the great experience they have had.
“Now we don’t play with our own names, we play as Brazil! We always represent Brazil, but this time it is different, because we are the national team of Brazil,” said 36-year-old Juliana Felisberta Da Silva, 2011 world champion in doubles beach volleyball and a bronze medallist at the 2012 Olympic Games in London. 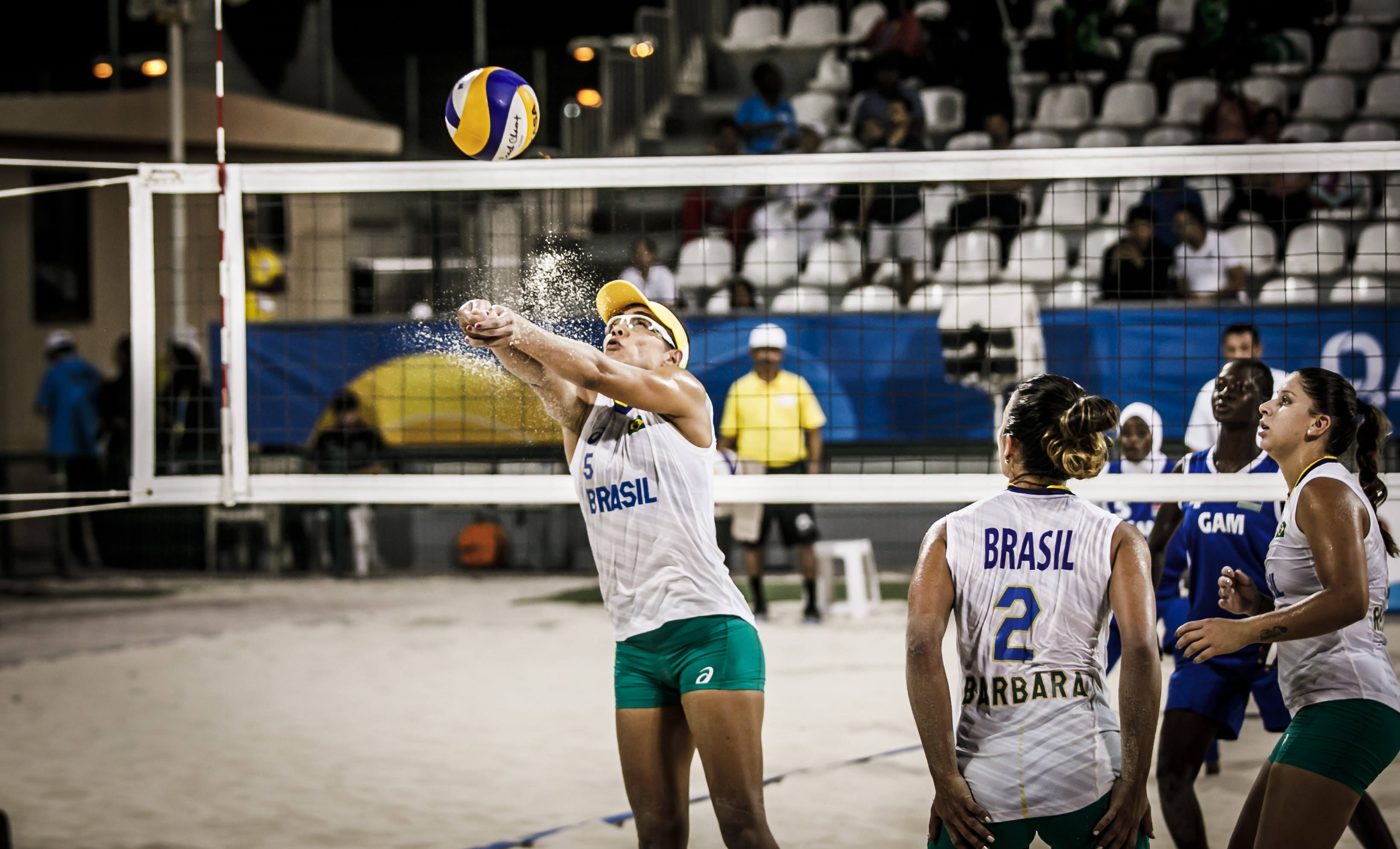 Juliana sets the ball
“I think all of us are feeling this team spirit here and we are happy to play under the name of Brazil,” added 34-year-old Fernanda Berti Alves, a silver medallist at the 2015 FIVB Beach Volleyball World Championships in the Netherlands. “I am having a good time. I am having a lot of fun inside the court. We didn’t have much time to practice, but I think the spirit of our group helped us set ourselves up as a team faster. We have a good energy and good communication and that makes everything easier.”
So far, the Brazilians have been emphatic at Qatar 2019, winning all their five matches in straight sets. They have to defeat United States one more time, in Wednesday’s gold medal match, to triumph as the first ever beach volleyball 4x4 champions of the World Beach Games. 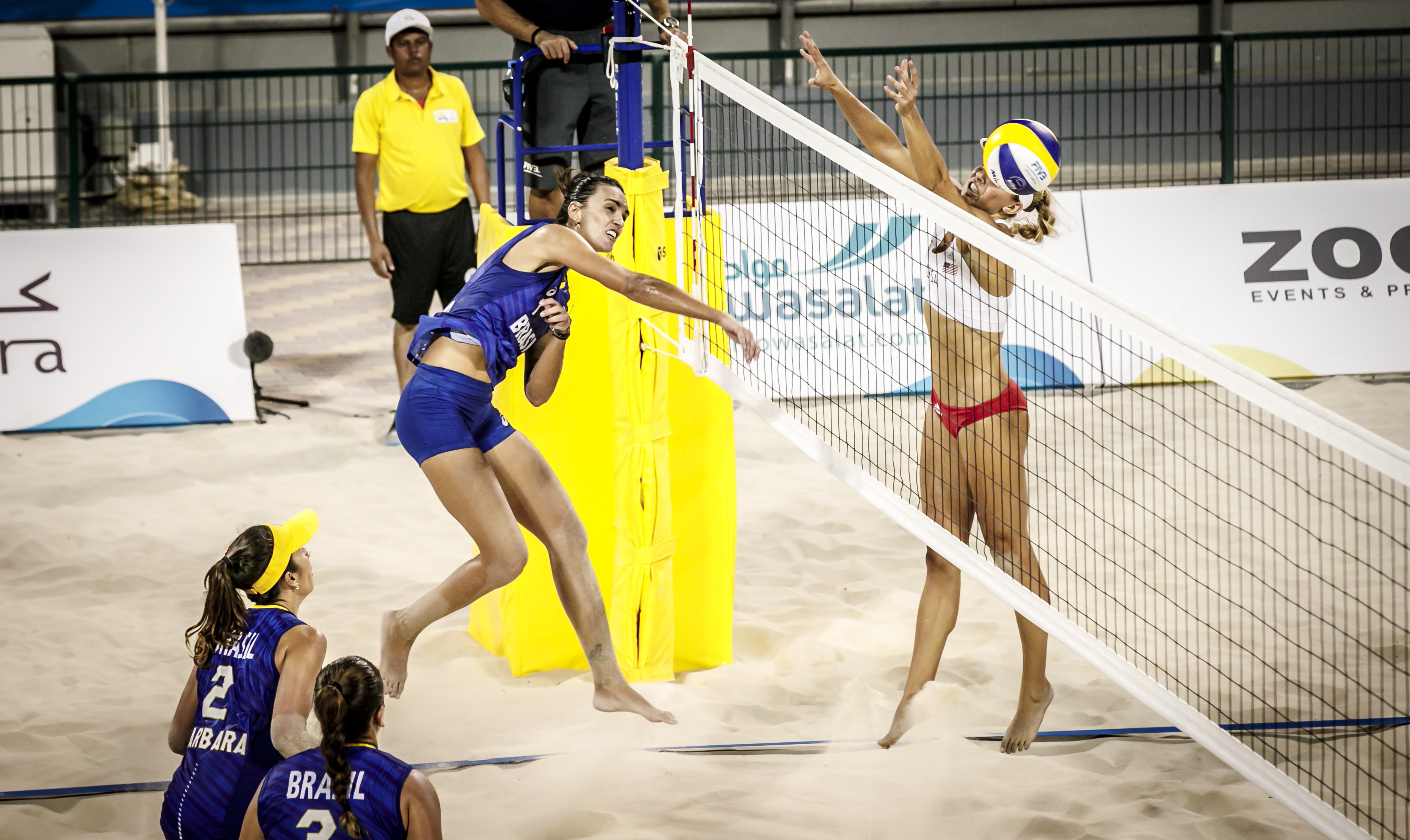 Fernanda spikes past USA's Allie Wheeler
“We are all really open-minded about this format and very motivated to continue winning,” said 32-year-old Barbara Seixas De Freitas, 2015 world champion and Olympic silver medallist in 2016. “Beach volleyball 4x4 has been a really different experience for us. In this format we have been able to do more plays and apply more tactics. We have different types of players on our team, so we can come up with a different mix depending on which team we play against and this is interesting for us.”
“This is a good experience indeed,” Juliana agreed. “Actually, I already had some experience with 4x4, because I played in a Brazilian tournament 16 years ago. It’s fun, because we usually play on opposite sides and now we are teammates on the same side. This is very good for us and I am enjoying it!”
“Normally, we play against each other. Now we play together to represent Brazil and it makes us proud. That’s very important!” Barbara continued. “This is also an opportunity to get to know all the girls a little bit better inside the court, the way each one works under pressure or what they do, what they think and how they play during the game.” 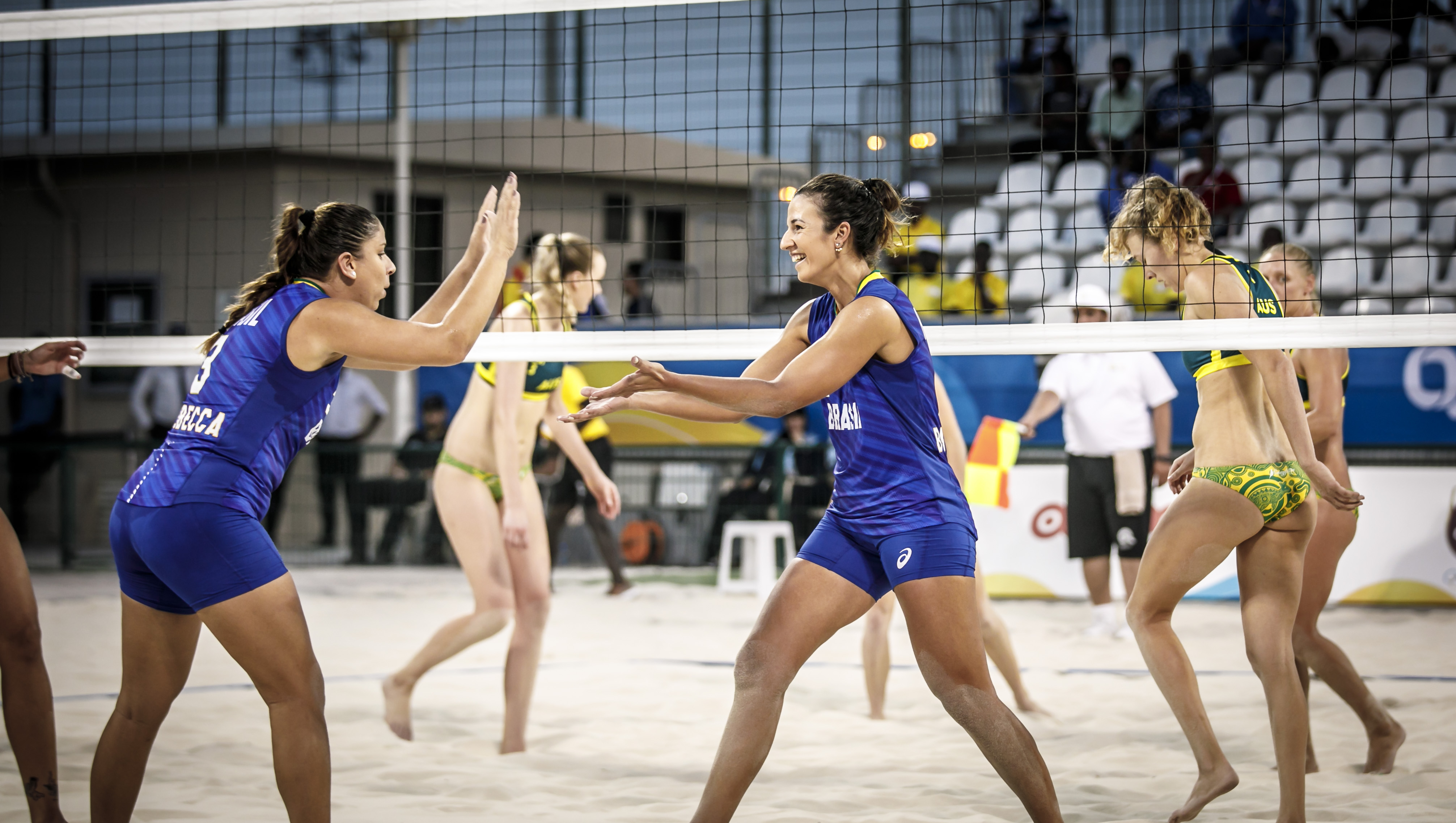 Barbara greeted by teammate Rebecca during the semifinal against Australia
The three Brazilian athletes, with tonnes of experience in the standard two-a-side version of beach volleyball, see the four-a-side discipline as a legitimate addition to the world of volleyball, as a sport, similar, yet different enough to bring in new opportunities and new emotions.
“In doubles we are used to always be in control of every part of the game, for us it’s important to know how to pass really well, how to set a good ball for your partner and also to be intelligent enough to put the ball on the ground on the other side,” analyzed Barbara. “In 4x4 we have separate functions, but, ideally, if the setter defends the ball, then another person can set and the setter has the skills to score. So the best way to get a great team is to have multi-task players. We are also able to have substitutions, so whenever a player is not feeling well or has an injury we have the possibility to put another one into play. This is a positive thing!”
“I would be happy to see 4x4 establish itself permanently as another category in beach volleyball,” Fernanda concluded.
Quick links - Beach volleyball:
Beach Volleyball 4X4 - ANOC World Beach Games
ANOC World Beach Games - Official website
Beach volleyball
Facebook
Twitter
Instagram