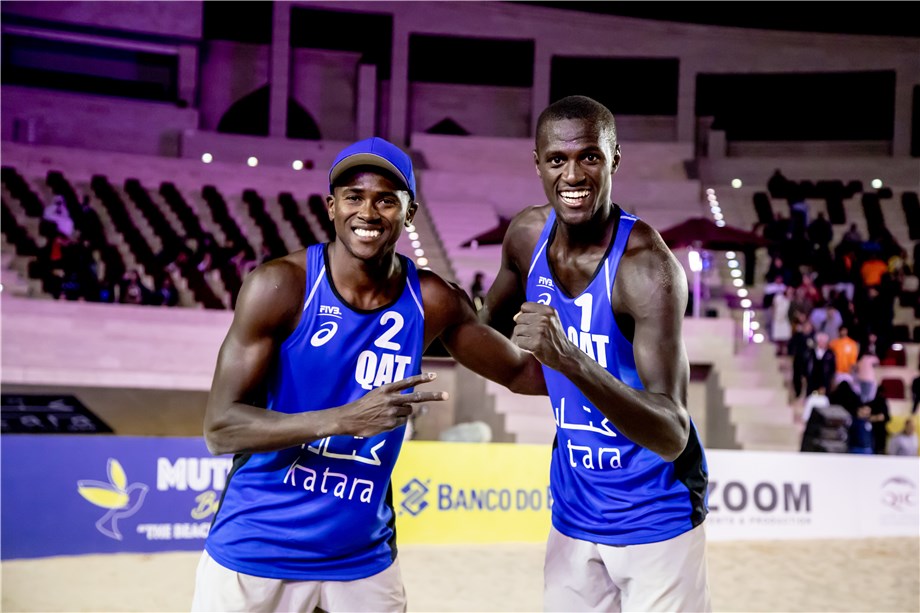 Doha, Qatar, October 8, 2019 – The names of a number of top-level beach volleyball athletes highlight the team rosters ahead of the upcoming beach volleyball 4x4 tournament at the 2019 ANOC World Beach Games. With six players per team and eight teams per gender, a total of 96 athletes are looking forward to the first FIVB-sanctioned 4X4 event, set to get underway in Doha, Qatar on Saturday.
The members of the best Qatari duo, Cherif Younousse & Ahmed Tijan, currently #14 in the FIVB Beach Volleyball World Ranking, will lead the home team in the men’s competition.
“We are really excited to play beach volleyball 4x4 for the first time, especially at home,” 2016 Rio Olympian Cherif Younousse told fivb.com. “It’s certainly different from the beach volleyball that we are used to and we know. We have been practicing for two weeks now and we are really looking forward to seeing how it’s going to be and how we are going to manage it in a real competition. We’ll try to do our best. Some of the things are similar to indoor, but many of the rules of beach volleyball 2x2 apply. This tournament will be really fun, but it’s going to be hard to manage things such as the setting, the block touch… It is not going to be easy for a lot of teams to keep this in their minds. We are really happy to host this tournament and I hope all the teams will enjoy playing in Doha.”
The USA team are set to arrive in Doha with a star-studded line-up, including 39-year-old World Tour and AVP legend and 2016 Olympian Casey Patterson, and Taylor Crabb, member of the #13 duo in the world ranking. Always ready to test out new things, the McKibbin brothers, Riley and Maddison, and Troy Field, well known in the world of beach volleyball, but now even more so in the world of snow volleyball as two-time medallists on the inaugural 2019 World Tour, will also be on the Doha sand, defending their national colours.
Qatar and USA will be in a very difficult Pool A in the company of a young German squad and the team of Indonesia.
The 19-year-old Mikolaj Miszczuk, who partnered with Mariusz Prudel to win World Tour bronze in Malbork a couple of months ago, is the oldest player on a Polish selection of ambitious and talented teenagers, eager to represent their country at this historic event. Another bronze medallist from the 2019 World Tour, Maximilian Guehrer, will lead the Australian squad. The national teams of Chile and Mozambique will join Poland and Australia in Pool B of the men’s competition.
Brazil are certainly the team to watch in the women’s competition. Their stellar line-up includes several multiple World Tour medallists, such as 36-year-old legend Juliana Felisberta Da Silva, an Olympic bronze medallist at London 2012 and a recent gold medallist on the Snow Volleyball World Tour, Barbara Seixas De Freitas, Olympic silver medallist from Rio 2016, Rebecca Cavalcanti Barbosa Silva, member of the #3 team in the current FIVB World Ranking, Fernanda Alves and Carolina Horta Maximo, as well as 2013 U19 world champion Taina Silva Bigi, also a gold medallist on the Snow Volleyball World Tour.
Two-time silver medallists on the FIVB Snow Volleyball World Tour Karissa Cook, Emily Hartong, Katherine Spieler and Alexandra Wheeler are on the USA's women’s team for Doha, ready to give beach volleyball 4x4 a try.
Brazil will face USA in the first stage of the competition as they share Pool A with the Czech Republic, led by seasoned World Tour participant Karolina Rehackova, and the team of Nigeria.
Camille Saxton, who won two gold medals on the 2017 World Tour, will lead the Canadian squad as they take on Vanuatu, Australia and Gambia in Pool B.
Quick links - Beach volleyball:
Beach Volleyball 4X4 - ANOC World Beach Games
ANOC World Beach Games - Official website
Beach volleyball
Facebook
Twitter
Instagram