Becoming a father for the first time and qualifying for an Olympics - Kevin Tillie looks back on the craziest week of his life! 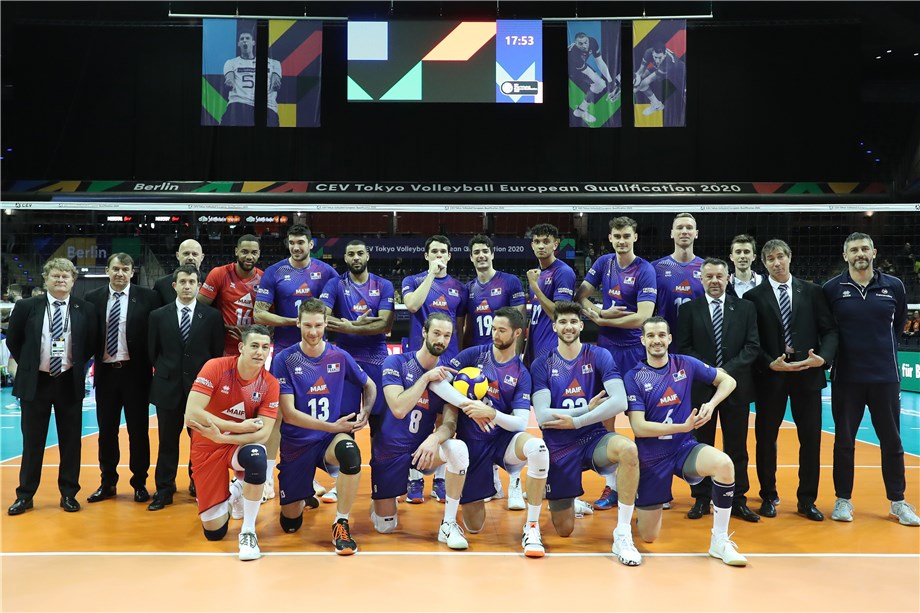 Lausanne, Switzerland, January 24, 2020 - Almost two weeks ago France qualified for their fifth Olympic Games in Berlin and capped off what Kevin Tillie is calling the craziest week of his life. The 29-year-old French outside hitter not only played a pivotal role in his nation's qualification for Tokyo 2020, he also managed to attend the birth of his first child.
Tillie, who is currently living in Warsaw and playing for Verva Warszawa Orlen Paliwa in the PlusLiga explains how becoming a father and preparing for a huge competition in the same week can be a unique experience.
"The birth started on the evening of January 2nd until Olivia was born at 8.45am on January 3rd, so we didn’t get much sleep. The next day was when I had to take a flight in the late afternoon to join the national team in Berlin. We played the first match on the 5th at 1:30pm. It was all such a rush and tight turnaround that I didn’t get any practice with the team before the match, luckily I managed to get a few practices and fitness sessions in Warsaw from December 30th to January 2nd, but during the two days before the first match against Serbia, I hadn’t practiced, worked out or slept very much. It wasn’t the best preparation for the match but I guess it took the pressure off a little bit. I couldn’t really concentrate properly."
Tillie, who has collected an impressive 229 international caps so far in his career, has become a crucial part of a French squad that also includes Earvin Ngapeth, Benjamin Toniutti and Jenia Grebbennikov. This golden generation for France have won the FIVB Volleyball World League, the European Championships in 2015 as well as a silver medal in the 2018 FIVB Volleyball Nations League.
Tillie arrived in Berlin looking to qualify for his second Olympics with France and was subconsciously relying on his experience as he joined up with the team.
“‘I was a mess emotionally when I arrived in Berlin. Everybody was congratulating me and I was just telling everyone stories. It was hard to focus and think that we were playing an Olympic qualifier in less than 24 hours, but I felt the mood within the camp was very relaxed compared to four years ago when we were qualifying for Rio.”
In a tough European qualification tournament which saw France win the competition and secure one of the final places at the Olympics, their road to success wasn’t straightforward. The French team had faced some criticism following a fourth place finish at the European Championships that they co-hosted in August, but they started their qualification campaign well in Berlin winning their opening game 3-0 against Serbia, the European Champions, who were many peoples' favourites to win and qualify.

Kevin Tillie serves during the European Olympic qualifier in Berlin
It wasn’t plain sailing for France though, and losses in two pool matches against Bulgaria and the Netherlands meant they squeezed out of Pool B as runners-up and had another tough game in the semis against Slovenia, a team full of confidence having secured a silver medal at the European Championship back in the summer.
In one of the most exciting games of the year so far, France managed to win 3-2 against Slovenia having lost the opening two sets and setting up a final with the hosts Germany - a game they would go on to win 3-0.
"We knew the chances of qualifying were small due to the competition being so tough and it took the pressure off of us because we were not the favourites to win. The team loves to joke around, we put music on and sing. It didn’t seem like we were gonna play an Olympic qualification. It helped with the nerves, stress and pressure although we played on the 5th, 6th, 8th - and on the 9th of January it was the semifinals. At that point the pressure does start to kick in more and more and as the final approaches you start to realise that the second placed team doesn’t receive any rewards. The nature of the competition means that it’s all or nothing."
"To qualify was such an amazing feeling for everyone especially for the team and the staff. We have worked so hard to get to the Olympics and to win the qualifiers felt almost impossible to achieve. No one believed in us and it makes it even better.

"It was the craziest week of my life! There were lots of different and intense emotions.
"I went from being nervous and stressed during the birth to confused and happy when Olivia was born. We were super tired after Olivia was born and thankfully I got to stay with Anna and the baby. I felt horrible leaving her. It was not easy for both of us. Her parents came to help so it was easier. Anna understands how huge the competition is and despite the slight chances of qualifying she knew I needed to be there and try. It feels really good that I didn’t leave for nothing and came back with an Olympic qualification! It will be a good story to tell Olivia."
Olivia Tillie has been born into a family of volleyball superstars and will never be short of someone to pepper with. Kevin, her father, is soon to be a two-time Olympian; her mother Anna is a volleyball player, her grandfather Laurent is a former captain and the long-standing head coach of the French national team. Her grandmother Caroline Keulen Tillie is a former Dutch international.
When asked if Olivia will follow in her family's footsteps, Kevin laughs.
"She might actually become a doctor, she will do what she wants but she will be growing up in an athletic family. She also follows in the footsteps of her uncles (both basketball players). She will certainly have a choice of nationalities that she can represent. Her mother is British and Canadian, I am French and Dutch and she was born in Poland. There is lots to choose from."
Tillie will have a busy end to the season in Warsaw with his club before embarking on his second Olympic journey with France. But when asked about his preparation for the games in six months' time, he insists that he is currently focused on changing one diaper at a time.