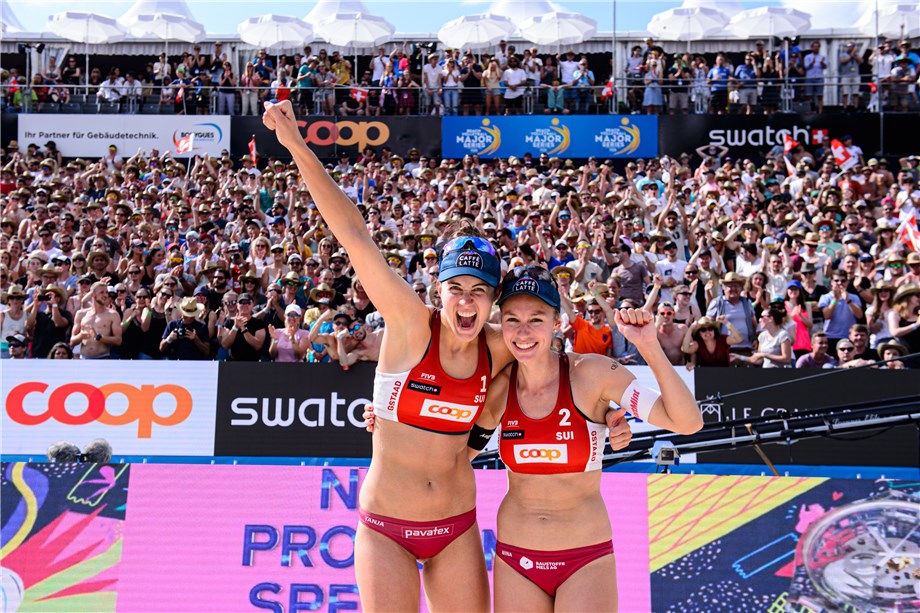 With Brazil guaranteed its 23rd women's medal in Gstaad and 45th overall with rivals Ana Patricia Silva/Rebecca Cavalcanti meeting Maria Antonelli/Carolina Salgado meeting each other in the second semi-final Sunday at 11:05 a.m. (local time), Betschart and Huberli play Alix Klineman/April Ross of the United States in the first match at 10:05 a.m. for a spot in the 2:45 p.m. gold medal match.
After posting a come-from-behind three-set win Saturday over Natalia Dubovcova/Andrea Strbova in the Swatch Major Gstaad quarter-finals, the 26-year old Huberli said "we just played the Americans in Warsaw, so we know how they play, and we will not do anything different. We’ll have a short discussion with our coach and then move on."
The third-seeded Klineman and Ross have defeated the top-seeded Swiss twice in FIVB World Tour pool play matches, including a 2-0 (21-15, 21-12) win in 33 minutes on June 13 in Poland.  The previous encounter was April 2018 in China with the Americans posting a 2-0 (21-16, 21-13) victory in 33 minutes.
Both Klineman/Ross and Betschart/Huberli entered this week's Swatch Major Gstaad with a range of emotions after competing in the final four at last week's FIVB World Championships in Germany where both teams lost close medal matches to pairs from Canada (gold) and Australia (bronze), respectively.
The fifth-seeded Ana Patricia and Rebecca, who eliminated defending Gstaad champions and newly-crowned world championships Melissa Humana-Paredes and Sarah Pavan of Canada Saturday in the quarter-finals, will be looking for their second-straight win over 15th-seeded Antonelli and Carolina on the FIVB World Tour. 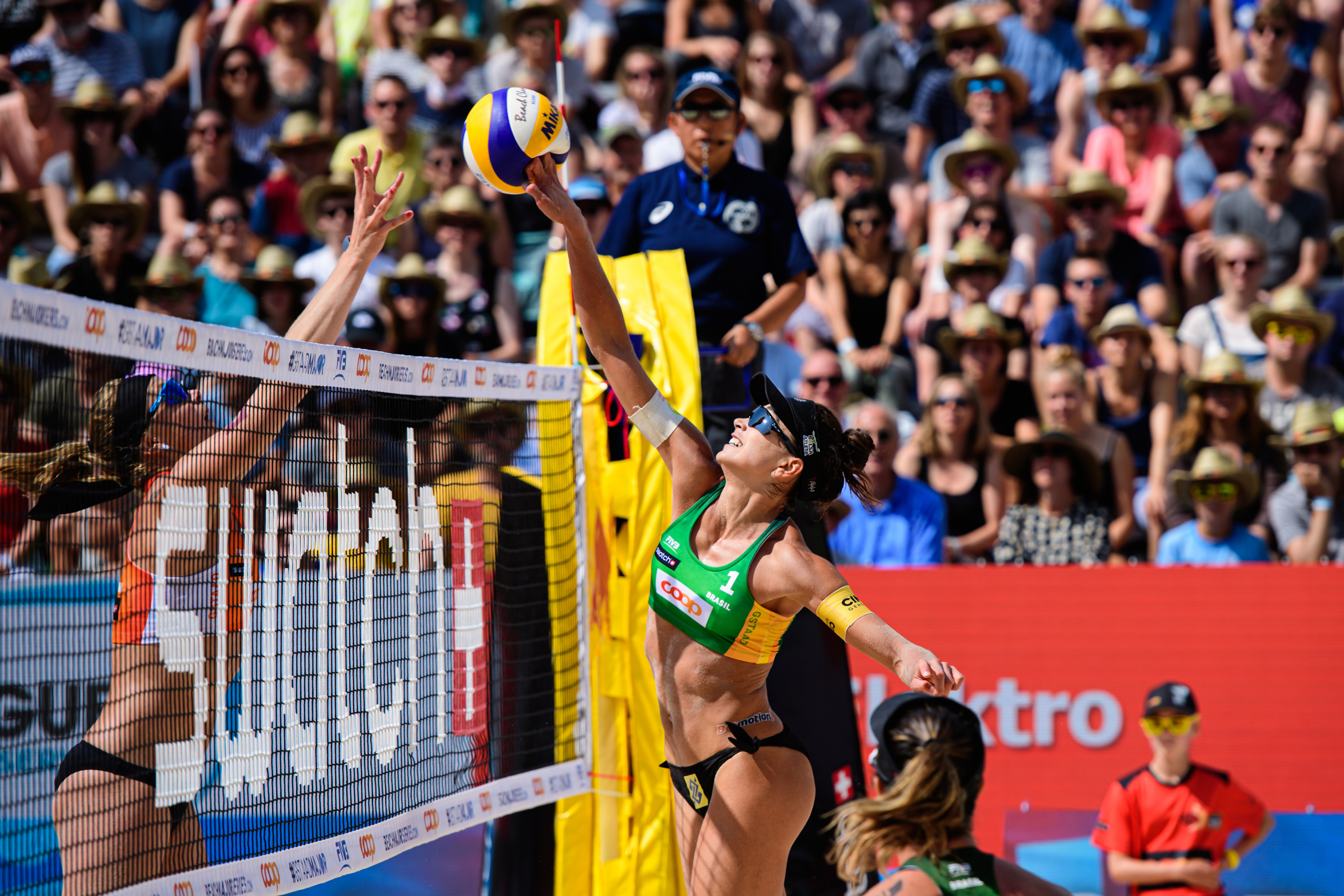 Carolina Salgado (center) hitting the Mikasa Saturday in a quarter-final win over The Netherlands.
Antonelli and Salgado, who had to win a qualify Tuesday for the Gstaad main draw, won the first two matches in Portugal and the United States last season before Ana Patricia and Rebecca posted a 2-0 (21-16, 21-13) win in 32 minutes over their Brazilian rivals April 26 in Xiamen, China.
The Brazilian semi-final winner will be seeking their country's 10th women's gold medal at the Swatch Major Gstaad and 18th overall as the South American country has now placed 46 men's and women's teams on the previous 19 Swiss Alps village podium.  The United States is second 23 overall medals.
In addition to Kuhn and Zumkehr's bronze in 2012, the Swiss men captured a silver medal by the Laciga brothers (Martin and Paul) at the first men's event in 2001 followed by a 2003 bronze and a 2004 gold for Patrick Heuscher and Stefan Kobel.
The 2019 Swatch Major Gstaad medal rounds started Saturday with Norwegians Anders Mol and Christian repeating as the event's men's winners by defeating Dutchmen Alexander Brouwer and Robert Meeuwsen in the two-set finale.  Evandro Goncalves and Bruno Oscar Schmidt captured the bronze medal for Brazil's 22nd men's podium placement in Gstaad with a three-set win over Daniele Lupo and Paolo Nicolai of Italy. 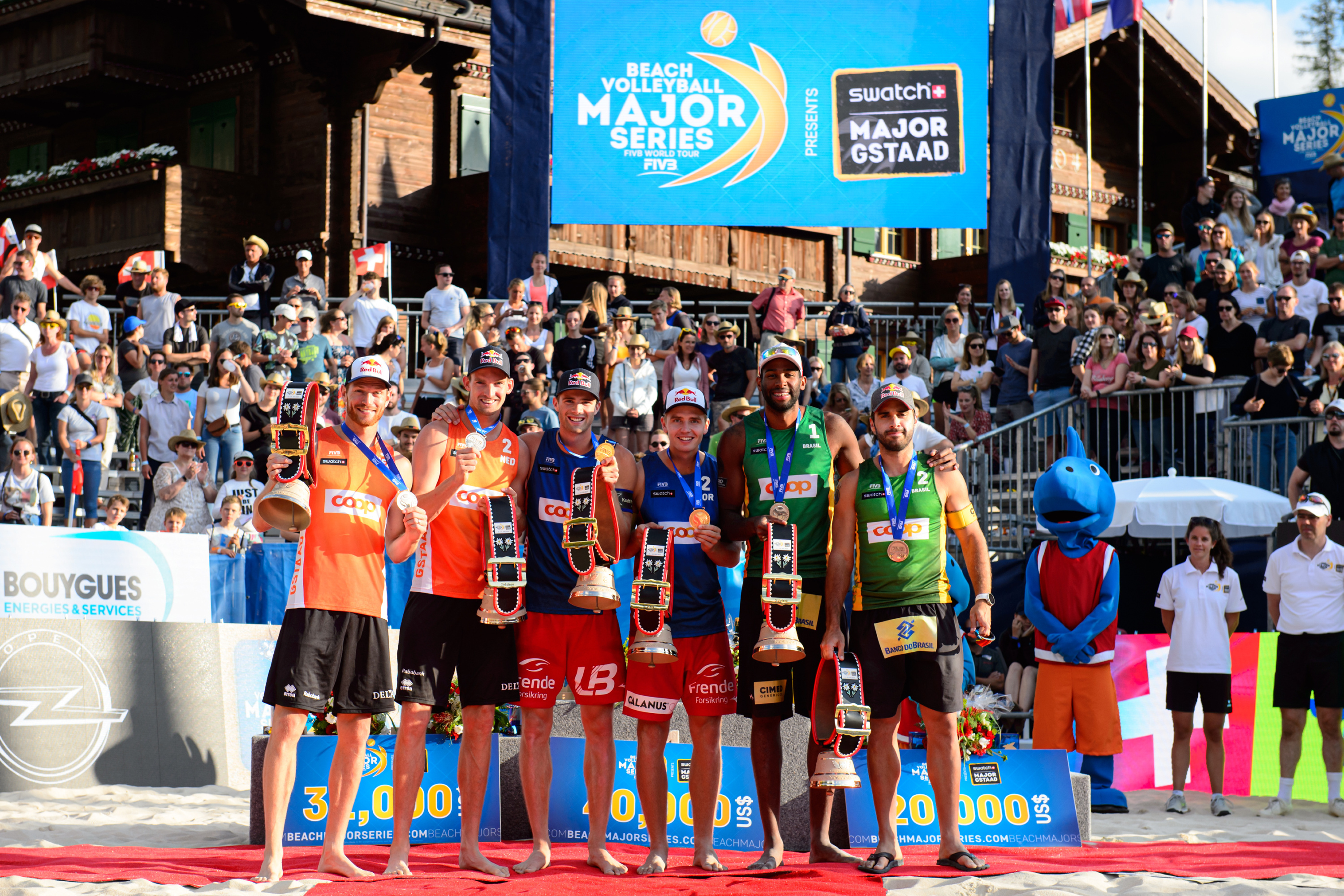 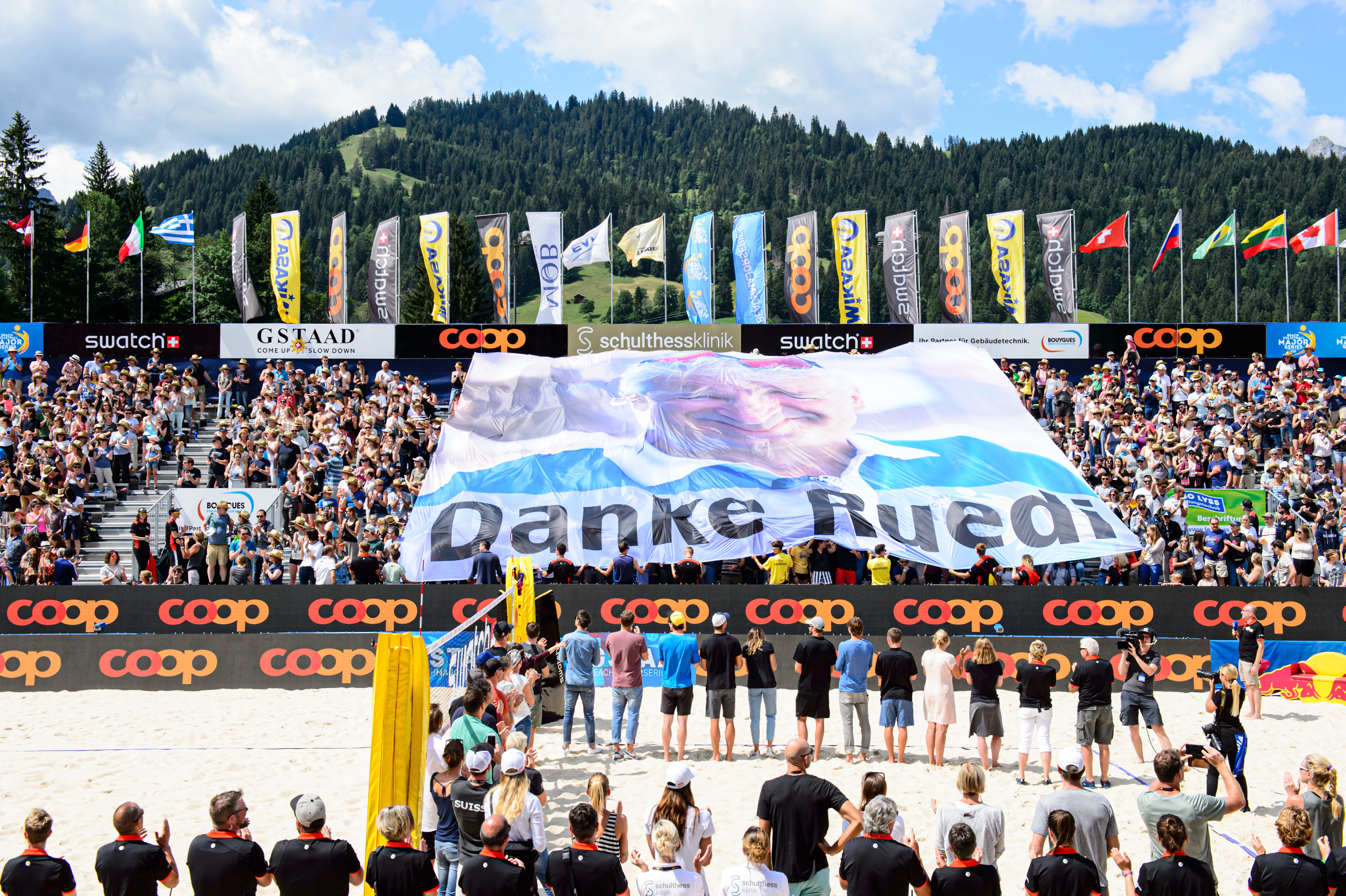 The Gstaad crowd Saturday thanked tournament director Ruedi Kunz for 20 years of beach volleyball in the Alps along with past and present participants in the Swatch Major Gstaad.
The FIVB World Tour for men and women continues next week with events in Portugal (Espinho) and Canada (Edmonton) followed by the Olympic "test" event in Tokyo July 24-28.