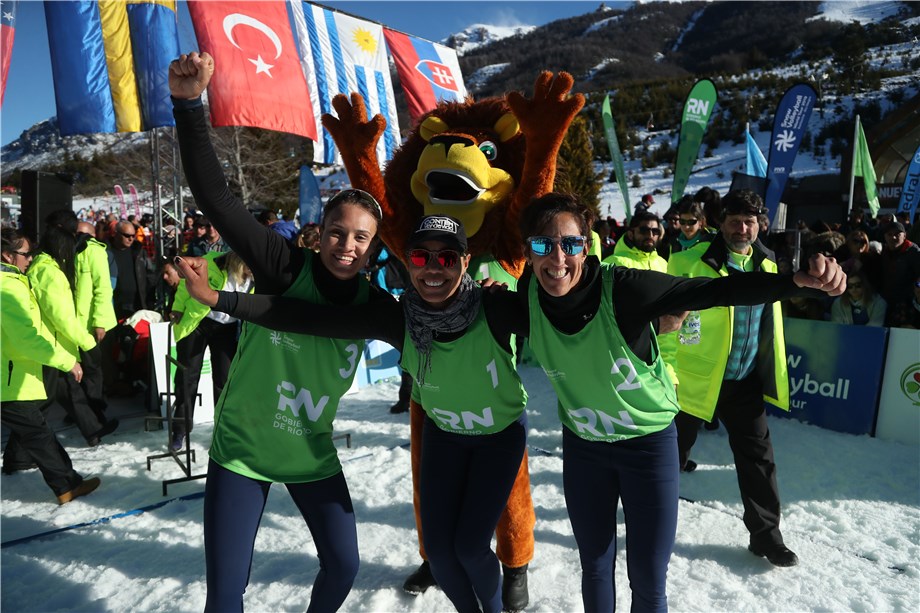 Lausanne, Switzerland, August 8, 2019 – Brazil has high hopes of placing its top teams among the best in the snow volleyball world and matching its exploits in volleyball and beach volleyball, after its women’s team won the country’s first FIVB Snow Volleyball World Tour gold medal on Sunday.
Josi Alves, Juliana Felisberta and Taina Silva triumphed at the Bariloche tournament in Argentina when they defeated Argentina’s Estefania Milesi, Laura Moreno, Brenda Churin and Victoria Pozzo Galdon 2-0 (15-10, 15-7) in a gold medal match opposing two countries who are yet to win a medal at the Winter Olympic Games.
Quick links - Snow volleyball:
FIVB Snow Volleyball World Tour - Bariloche, Rio Negro
FIVB.com - Snow volleyball
Rules of the Game 2018-2020
News
About
“Playing in minus four degrees on an icy surface was the best experience of my life,” Josi Alves told Pagina3 newspaper. “Being part of this new sport, that the FIVB is starting to promote with the intention of gaining entry into the Winter Olympics, was incredible and very important for my career.”
In Juliana Brazil had one of the most successful beach volleyball players. Alongside Larissa Franca she won gold at the Rome 2011 FIVB Beach Volleyball World Championships, bronze at the London 2012 Olympic Games and 11 FIVB Beach Volleyball World Tour titles.
Before the tournament in the Argentine province of Patagonia the 36-year-old admitted that she would be playing “in a place I never imagined playing,” but she took to her new surroundings with gusto and was named tournament MVP.
She wrote on her Instagram feed, “The first snow volleyball medal for Brazilian volleyball was in by far the most unusual place and in the worst weather conditions I've ever played, but we surpassed our expectations and we enjoyed every minute. Girls, it was a great pleasure to share this feeling with you guys.”