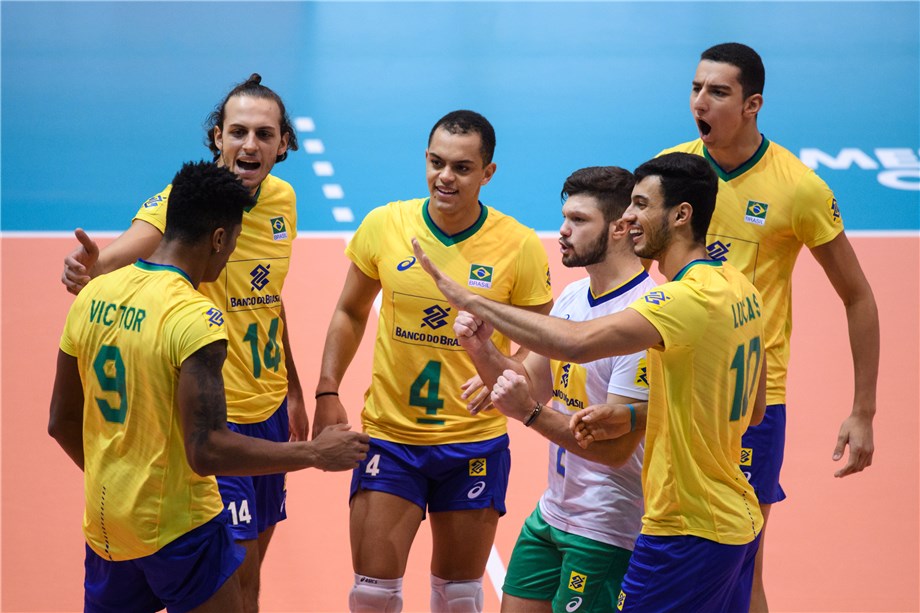 Brazil in high spirits after winning their opening match

Manama, Bahrain, July 18, 2019 – Brazil beat reigning champions Poland, 3-1 (25-23, 23-25, 25-18, 25-19) in Pool D during the opening day of the FIVB Volleyball Men’s U21 World Championship in Bahrain’s Isa Sport City.
Service mainly held the key as Brazil disrupted Poland’s passing pace. The South American side unleashed six service winners, and limited their opponents to a single ace.
Brazil captain and setter Rhendrick Resley Rosa orchestrated a well-balanced offence, enabling five of his hitters to figure in double digits.
In the other Pool D match, Italy ignited with a 3-0 victory (25-17, 25-17, 25-15) against Canada.
The European side dominated on all scoring fronts, with 33 attacks, six blocks and seven service winners. Captain Francesco Recine, Giovannimaria Gargiulo, and Daniele Lavia comprised Italy’s hard-hitting scoring trio, with each one recording nine points in the match.
Earlier in Pool B, Korea captain Im Donghyeok scored 20 points towards a 3-1 (27-25, 17-25, 25-22, 27-25) win against Cuba.
The Cuban squad clearly showed their power in attack, but the Koreans played more steadily, sustaining their persistence in defence and transition.
Also in Pool B, Argentina were victorious with a 3-1 (25-19, 26-24, 22-25, 25-18) result against Egypt.
Argentina’s captain Luciano Palonsky scored a match-high of 30 points. From this, he made six aces (out of the team total of eight) which boosted the squad’s serving prowess against their opponents.
Pool B competition continues on Friday with Korea and Egypt at 11:30, followed by Cuba and Argentina at 14:00. Pool D matches will be between Brazil and Canada at 16:30, and Poland and Italy at 19:00. All times local.