Hamburg, Germany, August 16, 2018 - Teams from Canada, Brazil and the Czech Republic are the only unbeaten women’s teams in the $800,000 Beach Volleyball FIVB World Tour Finals presented by Vodafone with 2-0 pool play records after two days of competition at Rothenbaum Stadium. 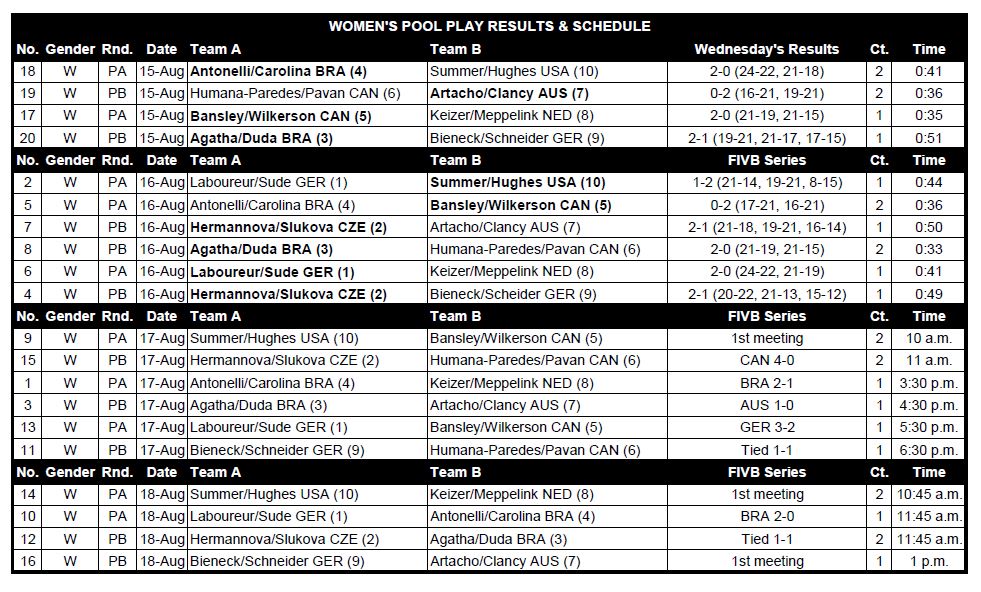 While the Brazilians and Canadians only played one match on Thursday, Hermannova and Slukova won twice in Pool B with a 2-1 (21-18, 19-21, 16-14) triumph in 50 minutes over seventh-seeded Mariafe Artacho/Taliqua Clancy of Australia and a 2-1 (20-22, 21-13, 15-12) victory in 49 minutes over ninth-seeded Victoria Bieneck/Isabel Schneider of Germany.
Agatha and Duda, who placed second in the 2017 World Tour Finals at Rothenbaum Stadium after losing to Olympic and world champions Laura Ludwig and Kira Walkenhorst of Germany, matched their win on Wednesday over a German team with a 2-0 (21-19, 21-15) Pool B victory in 33 minutes over sixth-seeded Melissa Humana-Paredes/Sarah Pavan of Canada.
“That definitely stayed in our minds and certainly increased our desire to beat them,” said Agatha after her team snapped a three-game losing streak to the Canadians after defeating Humana-Paredes and Pavan in the first two matches between the two teams.
“We don’t play that often and our last victory was in July 2017, so it’s something that bothers us,” Agatha added.  “We did some different stuff today from a strategy standpoint, but I think the key for our victory was Duda. She was playing so well, and she scored a handful of serving points, which allowed me to be more relaxed to side out.”
Bansley and Wilkerson are atop of Pool A by defeating fourth-seeded Maria Antonelli/Carolina Salgado of Brazil 2-0 (21-17, 21-16) in 36 minutes. On Wednesday, Bansley and Wilkerson posted a two-set win over eighth-seeded and European champions Sanne Keizer/Madelein Meppelink of the Netherlands.
“It was a tough match,” said Wilkerson after the match.  “It was hot and sunny and with two athletic teams in the court, there are a lot of rallies. It was a good fight. It’s always about continuing to minimize our errors and keeping control of our game. There are some very strong things that we did and it’s just keeping that consistency, which is just as hard as getting rid of our errors.”