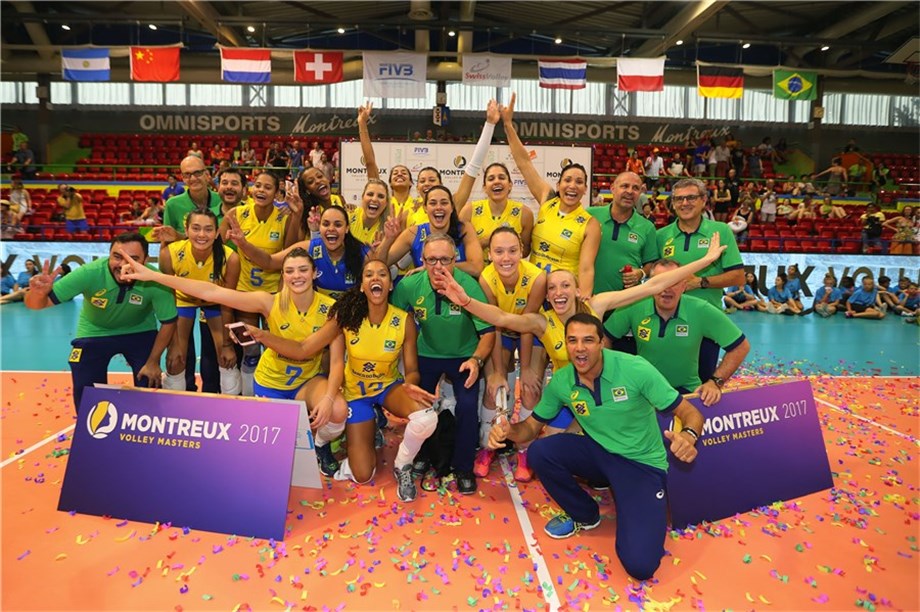 Montreux, Switzerland, June 11, 2017- Having exorcised the demons of 2016 with their semi-final win over China, Brazil went the distance and settled one final score with Germany by winning 3:0 (25-21, 25-18, 25-20) in the grand finale of the 2017 Montreux Volley Masters at Salle Omnisports Pierrier to grab gold at the invitational showpiece for a seventh time. Meanwhile, 2016 champions and Olympic gold medallists China secured a podium finish, beating Argentina 3:1 (25-21, 25-12, 20-25, 25-19) to avenge their defeat to the South Americans back in the pools and bag the bronze medal.
It was the battle for bronze that was the first order of the day for Super Sunday, the closure to the 32nd edition of this prestigious invitational tournament, on this occasion a repeat of a Pool A showdown between beaten semi-finalists Argentina, who were competing at their first ever Montreux Masters, and six-time champions China. It was the game neither side wanted to be playing, having come up short in two thrilling semi-final ties, but the opportunity lay on the table to salvage some consolation by finishing in third place, both teams having enjoyed fine campaigns.
Argentina had come out on top in a five-set thriller between the sides back in the pools, but it was deposed champions China who would avenge that defeat and take the prize on this occasion, putting in a professional performance which contained all the quality that was missing in their semi-final defeat to Brazil. Gong Xiangyu, who featured in the Chinese side that triumphed in the Olympics at Rio last year, was the star performer, plundering 17 points for An Jiajie’s side, whilst Gao Yi, Wang Yuanyuan and Liu Xiaotong also shone. Argentina were not at the races, set apart from the side that had seen off the Chinese in the pools. It was defence that won the day for China, Gao Yi the rock with a hat-trick of successive blocks in the second set which epitomised her overall performance. It was a display of finesse, and one that ensured that the bronze medal would be going east, whilst Argentina can leave with their pride intact nonetheless, having finished an admirable fourth on their Montreux debut.
That laid out the red carpet for the grand finale. The curtain call for the 32nd edition of this famous invitational tournament. A grapple for gold before a raucous crowd at Montreux poised for the action: Germany vs Brazil. A final worthy in name as a closing sequence for any tournament, and both teams didn’t disappoint, Brazil saving their very best performance for last in a captivating display. José Roberto Guimaraes’ side had already endured a rollercoaster of emotions at this year’s competition. Dogged with the absences of key players through retirement and injury in what had been labelled a challenging period of transition, this triumph is beyond hope for the future. The Brazilians banished the shadow of 2016 in their defeat of China, before negotiating one final hurdle in fine fashion against a side who’d already gotten the better of them back in the pools. It also put pain to the German dream of winning the tournament to crown a glorious fortnight for them, denying them the fairy-tale ending their exploits probably deserved as they qualified for the 2018 FIVB Volleyball Women’s World Championship on the eve of the opening day of this year’s Montreux Masters, before going on a mesmerising run to the final. The demands of that schedule, it seemed, had finally caught up with them as Brazil dazzled on court and put their brave but noticeably off-colour opponents to the sword, though the runners-up still put in an admirable performance to keep the sets thrilling and competitive.
Rosamaria Montibeller, Natália Pereira and Ana Carolina Da Silva were the stars of the show, the latter coming away with the accolade of MVP as her blocks and lethal spiking at crucial times not only shut down the devastating German offense of Louisa Lippmann, Jennifer Geerties and Maren Brinker, but allowed teammates Tandara Caixeta and Adenizia Da Silva the freedom to shine.
Brazil’s iron-curtain defence from the off slammed the breaks on the tiring Germans, although they showed glimpses of the quality that has carried them to the final. But as Brazil motored through the sets and tightened their grip on the gold, they only grew stronger in the game, the effort Germany had put in prior to the final finally having broken their resolve, and it was a laboured spike that went too long that handed match-point to Brazil and with it the prize, a wonderful achievement for a side that some doubted going into the tournament.
Although the sun sets once more over the carnival of volleyball in Montreux, its light will continue to shine on its community of supporters, both local to the commune and worldwide. Another year of drama, ecstasy, despair, desire, brilliance, expression, and passion has ensured that the 2017 showpiece lived up to its 2016 predecessor. The future of volleyball for these eight nations is certainly in save hands, and it may well prove that this showpiece is not so much an end as Brazil walk away with the spoils, but rather the beginning of something extraordinary for those involved.
2017 Montreux Volley Masters Team of the Tournament:
Ana Carolina Da Silva [Brazil] (MVP & Best Middle Blocker), Roberta Silva Ratzke [Brazil] (Setter), Lenka Dürr [Germany] (Libero), Marie Schölzel [Germany] (Middle Blocker), Paula Yamila Nizetich [Argentina] (Wing Spiker), Natália Pereira [Brazil] (Wing Spiker).