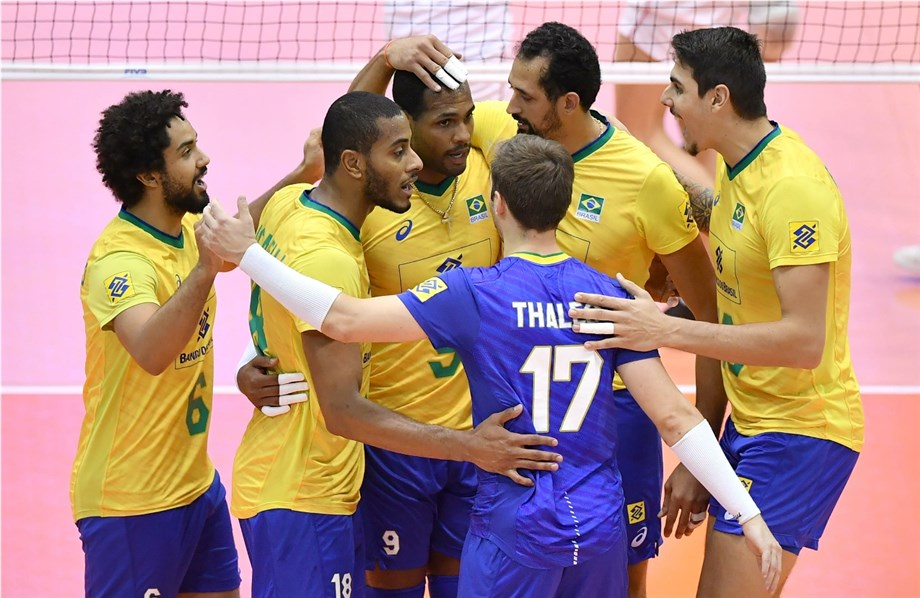 Brazil celebrate a point against Iran on Sunday

Fukuoka and Nagano, Japan, October 6, 2019 – Reigning Olympic champions Brazil kept a perfect record to take the top spot at the end of Round 1 of the 2019 FIVB Volleyball Men’s World Cup.
The Brazilians took their fifth straight win on Sunday with a 3-1 victory (25-27, 25-21, 27-25, 25-22) against Iran at Nagano’s White Ring Arena.
In the first set, Iran coach Igor Kolakovic called upon his younger hitters Porya Yali and Amirhossein Esfandiar from the men's U21 team. The Iranian side delivered well on attack and showed they could also convert on blocks. Brazil tried to deliver their serves with pressure and played good defence to keep the contest close.
By the second set, Brazil setter Bruno Rezende and Lucas Saatkamp were converting effectively. Ricardo Lucarelli also delivered a series of good serves, which put Iran’s passing in difficulty. The Brazilians ran their pipe plays well, while Iran started misfiring their attacks.
Iran improved their play in the third set by trying to manage the attacks of Yoandy Leal and Lucarelli with good defence. The Asian side nearly took the third set but Brazil coach Renan Dal Zotto called a successful challenge on an attack line fault. Lucarelli delivered back-to-back attacks to close the set in Brazil’s favour.
Brazil continued to utilise Saatkamp’s momentum in the middle. Alan Souza and Leal delivered the crucial points, each scoring 16 points in the win.

Dal Zotto commended his team for their effort during the first round in Nagano. 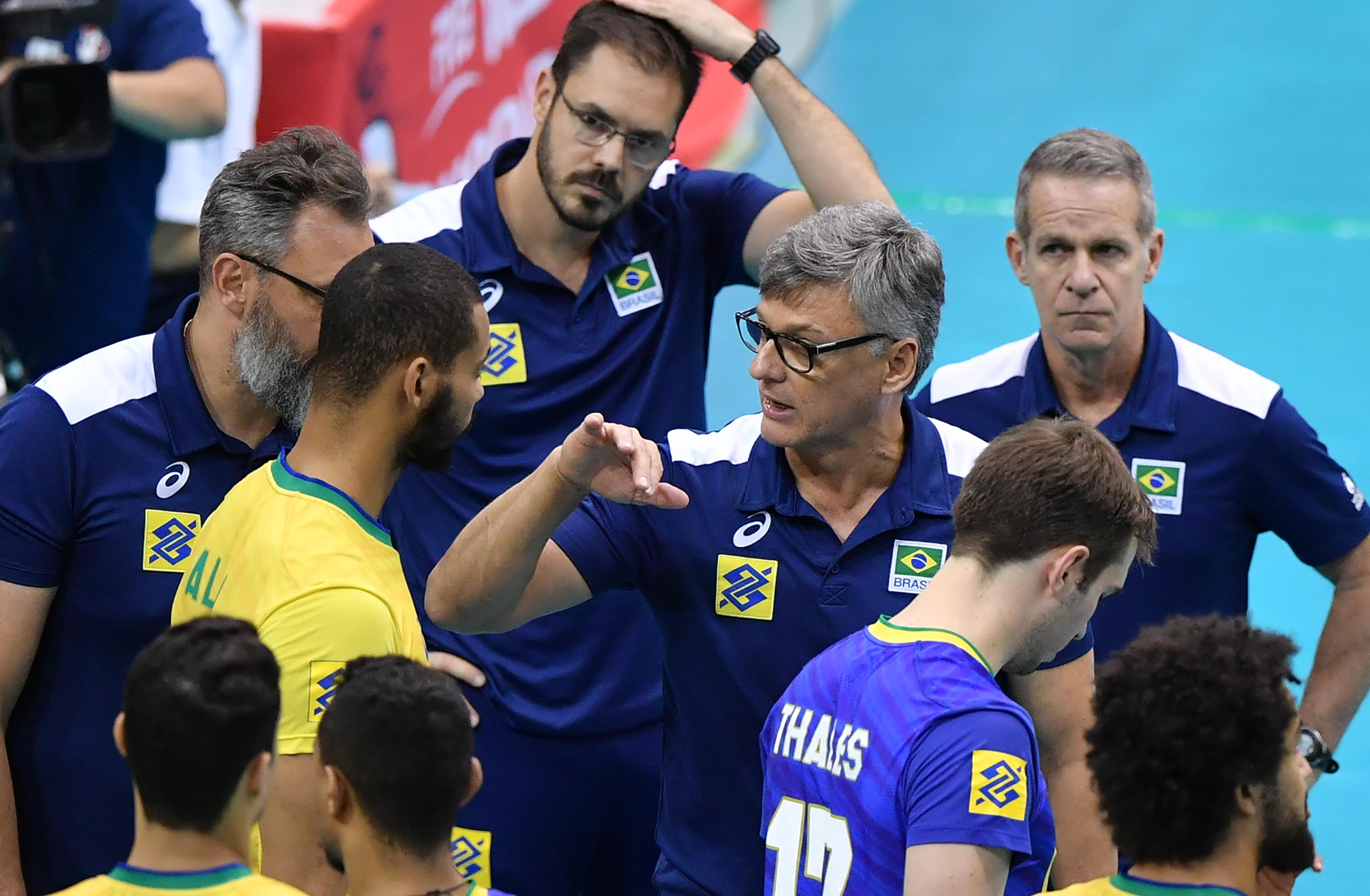 Brazil coach Renan Dal Zotto during a time-out
“I would like to tell my players that they did a very good job. I’m not only talking about their technique, but their mentality has also been fantastic. We have faced many difficult moments in our matches during the first half of the competition, but our players have never given up. They have stuck to their task of winning every point, and their play has improved very much. They have grown a lot during this tournament, and I’d like to praise them for that,” Dal Zotto said.
USA 3-0 Tunisia
USA claimed the second spot in the standings with a 4-1 card after winning in straight sets 3-0 (25-10, 25-18, 25-17) against Tunisia at the Marinmesse in Fukuoka.
The Americans led on all scoring fronts. Joshua Tuaniga orchestrated a well-distributed offence with USA’s deep roster of hitters. Mitchell Stahl charted 10 points as USA’s top scorer, while Tunisia’s opposite Hamza Nagga scored 13 points in the loss.

Poland 3-0 Italy
Poland placed third in the standings after they handed a 3-0 defeat (25-18, 25-18, 25-22) to Italy in Fukuoka.
The current world champions utilised a good service game which put their opponents under pressure. Although they did not convert much with aces, Poland's well-placed serves found Italy struggling with their rhythm.
Italy coach Gianlorenzo Blengini noted: “Their float serve was functioning well, especially in the first set. They have good servers – Leon, Kurek, Kochanowski – and they have variety in their serves. When they do that then they are difficult to play against because their serve disrupts our defence and strategies as well.”
Wilfredo Leon (15 points) remained Poland’s primary option in offence, with Aleksander Sliwka (15 points) and captain Bartosz Kurek (11 points) helping out in the victory.
Japan 3-1 Argentina
Hosts Japan climbed to the fourth spot in the current standings, after taking a 3-1 win (25-19, 25-20, 26-28, 25-22) against Argentina on Sunday.
Yuki Ishikawa played an inspiring performance of 23 points (20 attacks and three blocks) in front of the home crowd in Marinmesse Fukuoka. Yuji Nishida contributed another 16 points in the host team’s third victory. 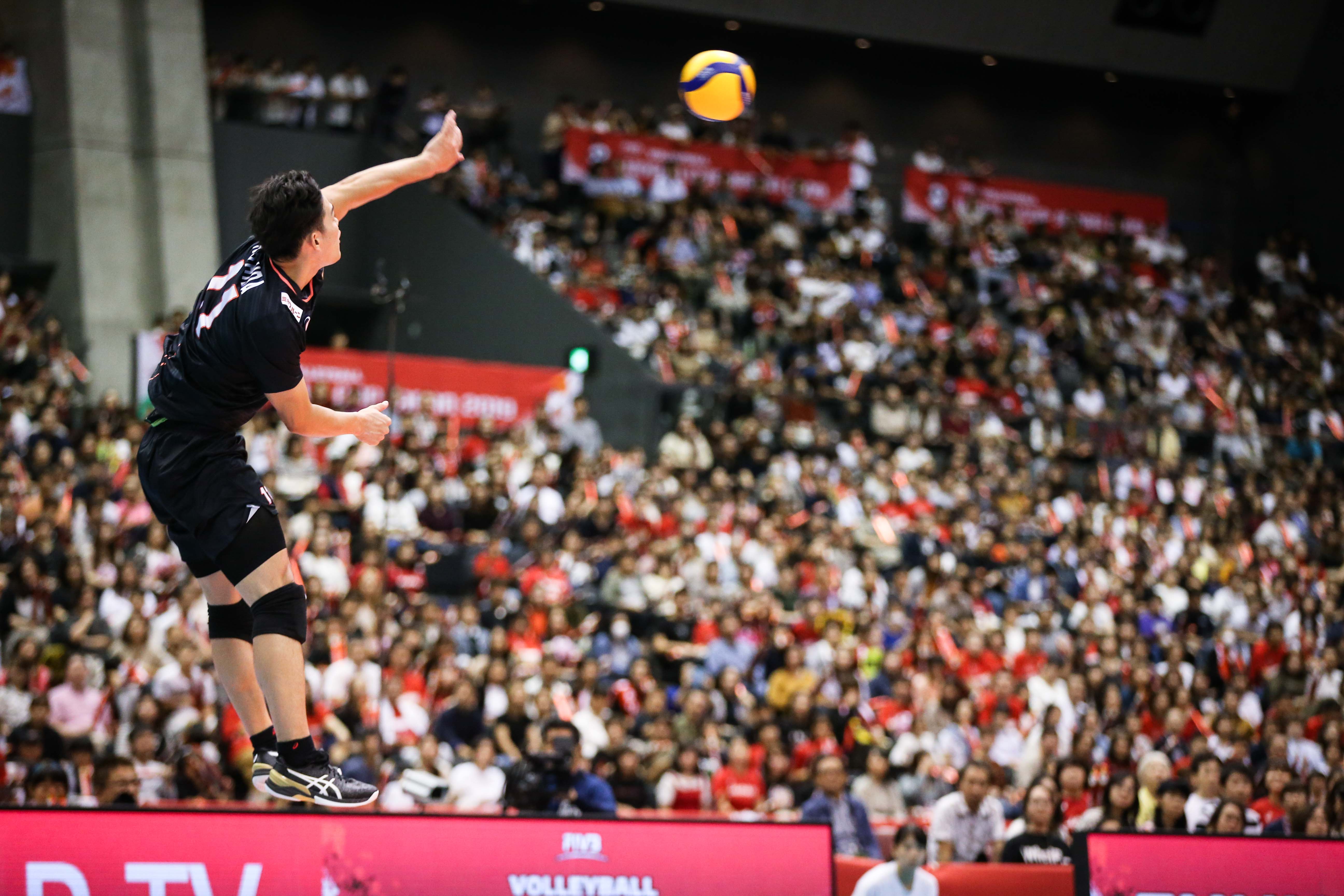 Japan no. 11 Yuji Nishida serves in front of a sold-out crowd in Marinmesse Fukuoka

Russia also fared well in their serve-receive, giving setter Sergey Grankin the ability to enable attacks from the middle by Igor Philippov and Ivan Iakovlev. Yaroslav Podlesnykh led all scorers on the board with 17 points.

Results and Ranking after Round 1 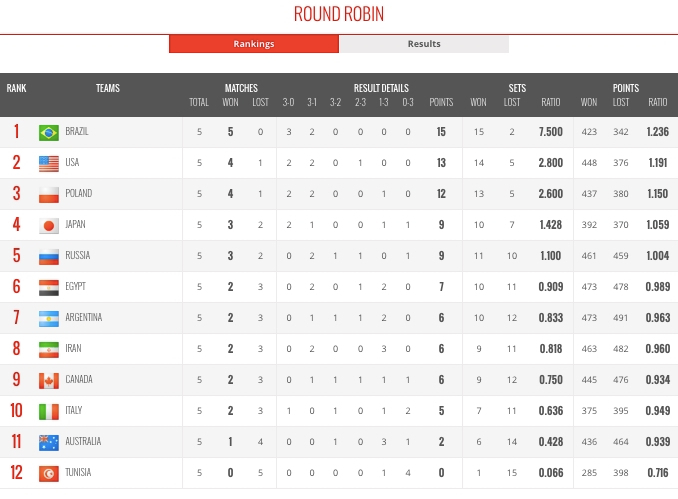 The twelve participating teams all travel to Hiroshima for the second and third rounds of competition. Matches resume on Wednesday, October 9 at the Green Arena.