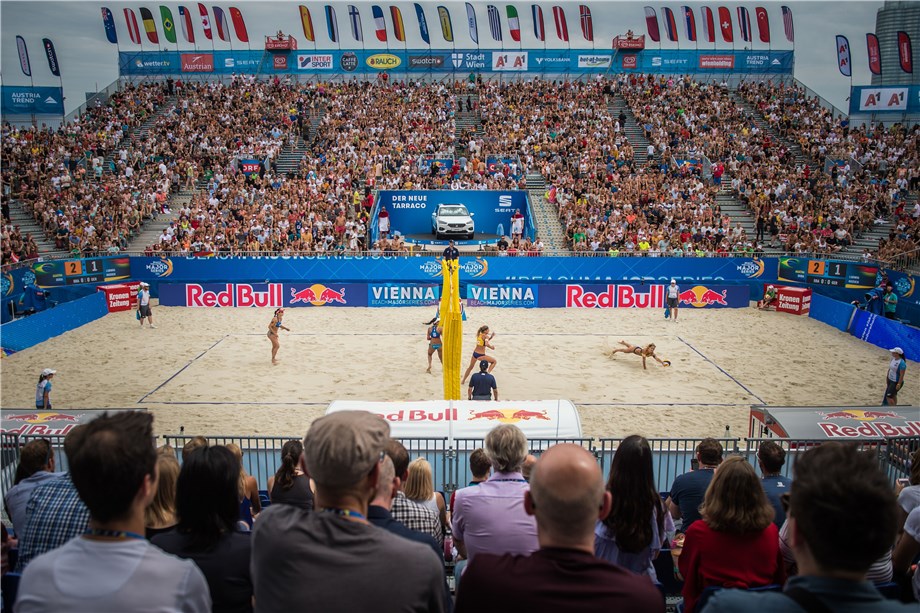 More than 10,000 fans will be watching Saturday's women's medal matches at the A1 Major Vienna where three Brazilian pairs are seeking a podium sweep with only world champions Melissa Humana-Paredes and Sarah Pavan of Canada to defeat twice.

Vienna, Austria, August 3, 2019 - With three teams advancing to a FIVB World Tour semifinal for the first time since May 2016, a trio of women's pairs from beach volleyball power Brazil will be seeking an A1 Major Vienna podium sweep here Saturday afternoon.
Quick links - Beach volleyball:
FIVB Beach Volleyball World Tour - Vienna
Facebook
Twitter
Instagram
While the women are completing play on the Donauinsel, eight men's teams from eight countries will be playing quarterfinal matches Saturday to set the lineup for Sunday's semifinals.  Six of the men's pairs are from Europe (Germany, Norway, Poland, Russia, Spain and Switzerland) along with tandems for Brazil and the United States.
With recently-crowned FIVB world champions Melissa Humana-Paredes and Sarah Pavan of Canada standing in the way of a 1-2-3 finish in the Austrian capital for the South American country, fourth-seeded Agatha Bednarczuk/Eduarda "Duda" Lisboa will be the featured Brazilian pair in the semifinals.
The other two Brazilian women's teams in the US$600,000 A1 Major Vienna final four are two duos that had to win a pair of qualifying matches Tuesday to gain a berth in the main draw, including sixth-seeded Maria Antonelli/Carolina Salgado and 25th-seeded Talita Antunes/Taiana Lima.
The second-seeded Humana-Paredes and Pavan will meet Agatha and Duda in the second women's semifinal Saturday at 12:45 p.m. (local time) in the eighth FIVB World Tour match between the two teams with the Brazilians leading 4-3 after a quarterfinal win June 14 over the Canadians in Poland at the Warsaw Open. 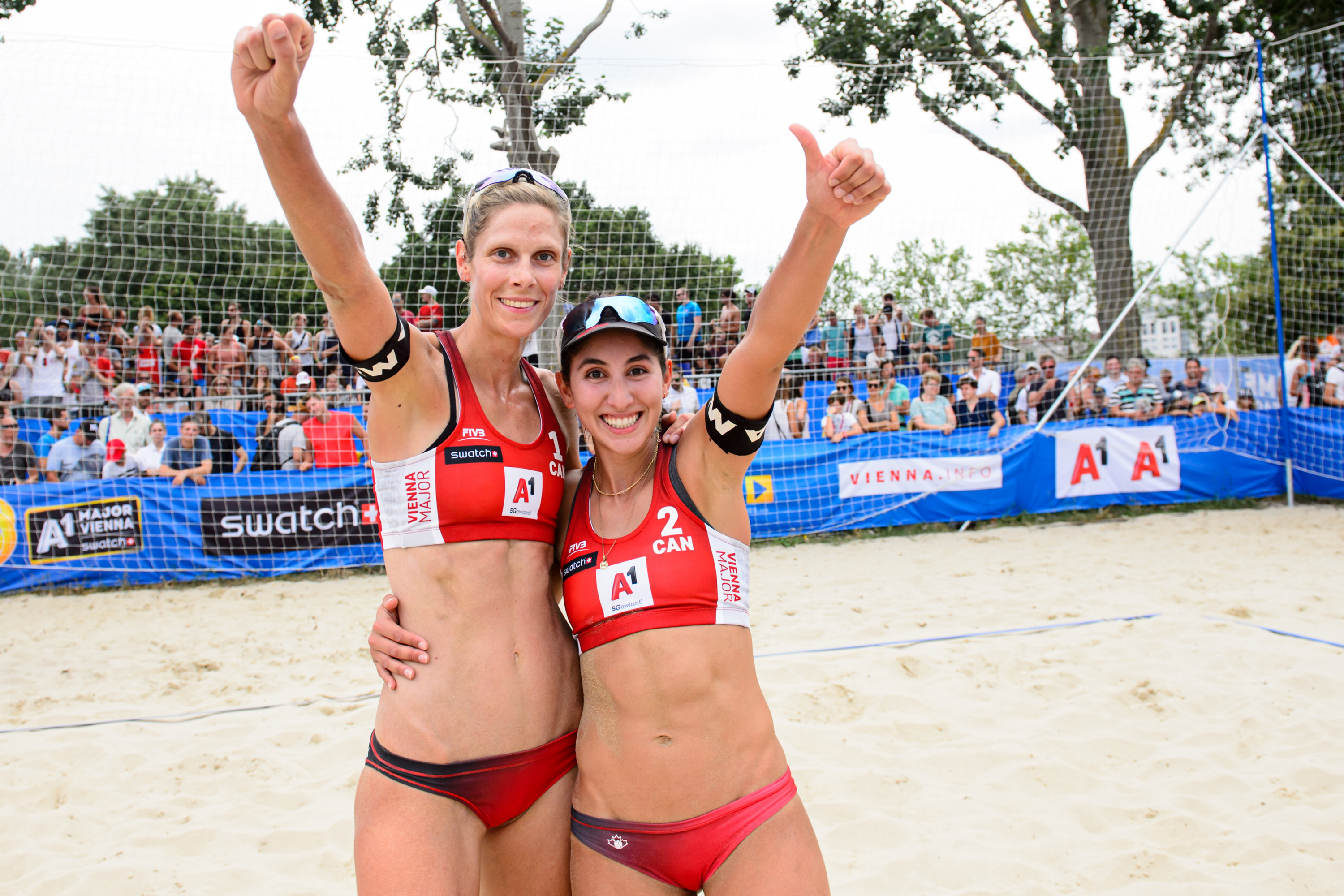 FIVB world champions Sarah Pavan (right) and Melissa Humana-Paredes of Canada
Both teams have captured two World Tour gold medals this season and five FIVB titles overall.  Agatha and Duda topped the podium last week in Tokyo at the dress rehearsal for the 2020 Olympic Games while Humana-Paredes and Pavan won their gold medals last month highlighted by the world champions title July 6 in Hamburg, Germany.
The first semifinal will be at 11:30 a.m. with Talita and Taiana challenging Antonelli and Carolina.  While Antonelli and Carolina are appearing in their fourth final four this season and 11th overall, Talita will be appearing in her first FIVB semifinal since August 26, 2017 and Taiana since March 4, 2018 with two different partners.
Talita, who missed the 2018 season due to childbirth over 13 months ago, and Taiana have gold medal history together as the pair won five titles during the 2013 season with the last being in Germany at an August event in Berlin.  Antonelli and Salgado's only gold medal together was June 2017 in The Hague.
The two teams have met twice this season with Talita and Taiana winning twice in China April 26 during the first round of elimination in Xiamen April 26 and July 16 in Portugal at a country quota match in Espinho. 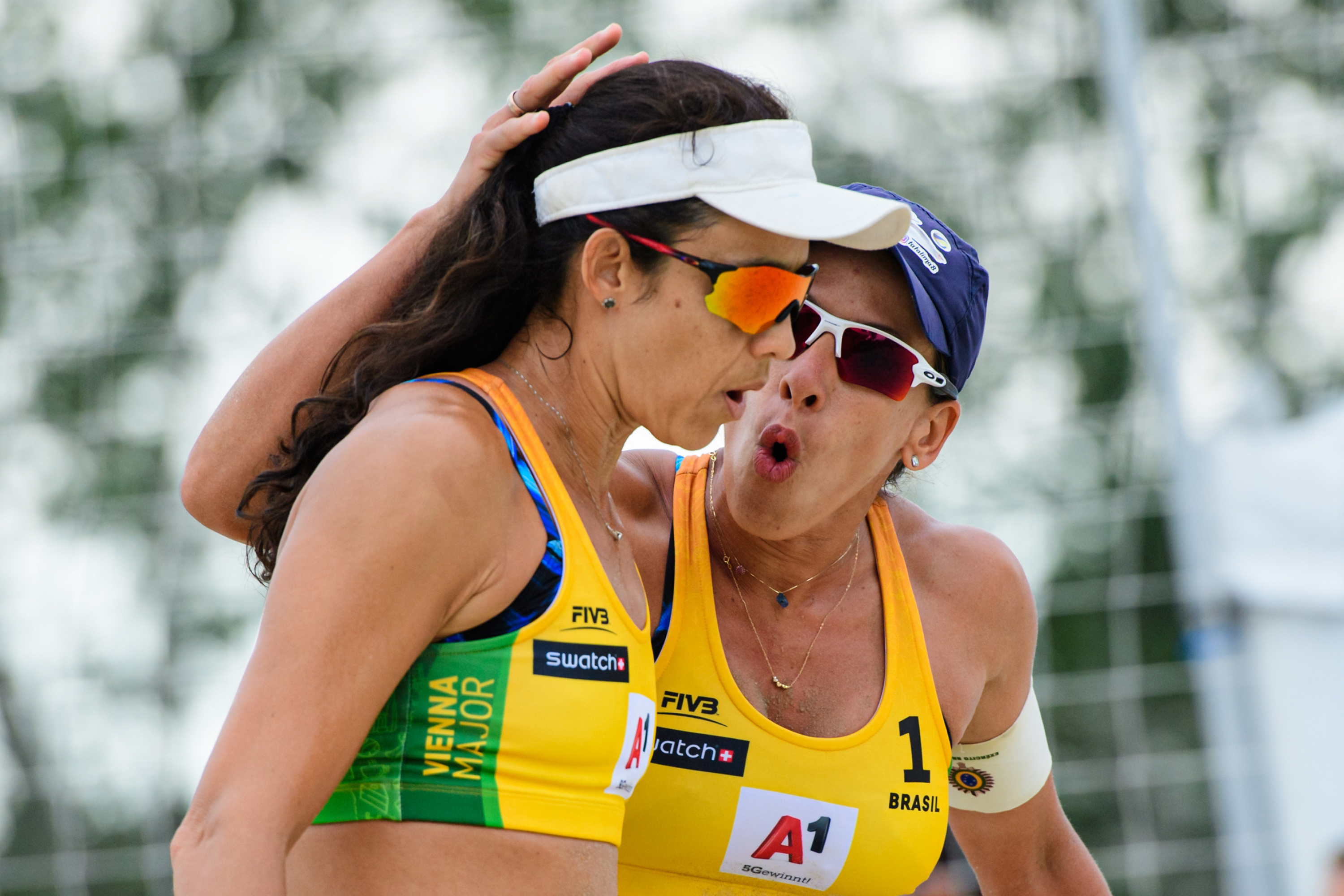 Talita Antunes (left) and Taiana Lima of Brazil
With the A1 Major Vienna being the 413th women's World Tour event, an All-Brazilian finale will be the 62nd in FIVB history that two teams from the South American country have met in the gold medal match.  If Humana-Paredes and Pavan are successful in the semifinals, the pair will be looking for Canada's first gold medal win over a Brazilian team in five women's gold medal matches between the two countries.
Humana-Paredes and Pavan played in the last two Brazil vs. Canada finals in 2017 in Rio de Janeiro against Agatha and Duda and Poland against Talita and Larissa Franca.
The last Brazilian women's podium sweep was May 1, 2016 on home sand in Fortaleza with Duda and Elize Maia defeated Juliana Felisberta/Taiana Lima in the finals with Rebecca Cavalcanti/Liliane Maestrini placing third.  The last All-Brazilian women's finale was this season in the Czech Republic with Agatha and Duda defeating Rebecca and Ana Patricia Silva in the June 2 gold medal match in Ostrava.
Saturday's men's schedule features top-seeded and defending A1 Major Vienna champions Anders Mol and Christian Sorum meeting 25th-seeded Adrian Heidrich/Mirco Gerson of Switzerland at 3:15 p.m. in the last of quarterfinal match on center court. 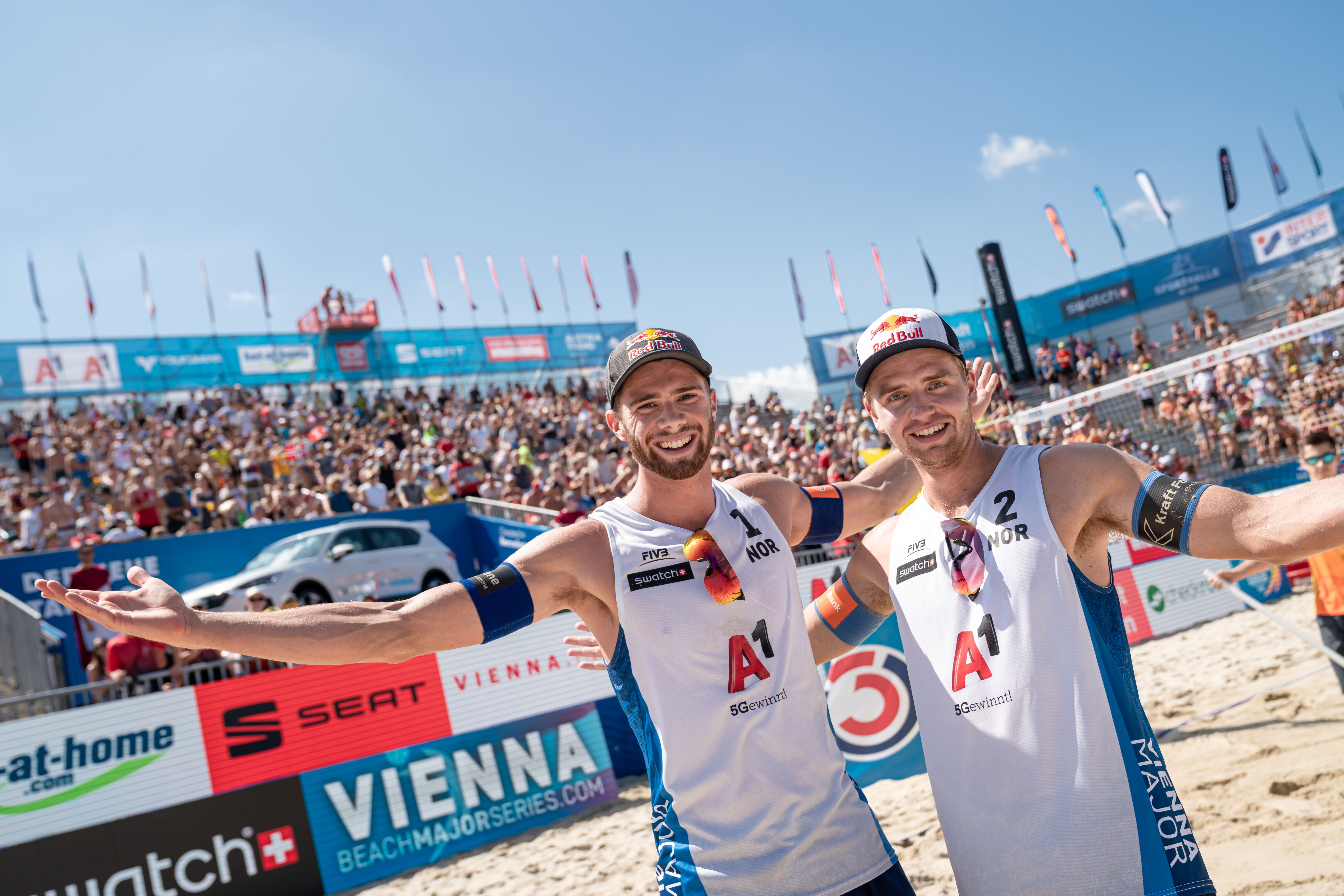