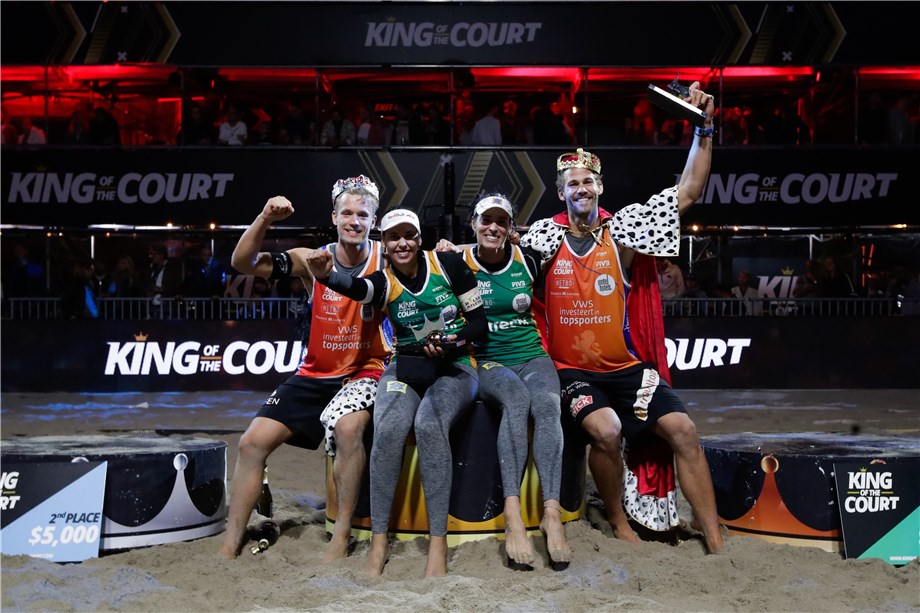 Utrecht, Netherlands, September 12, 2020 – An exciting week of beach volleyball came to an end on Saturday in Utrecht, the Netherlands, with teams from Switzerland and Brazil top of the podium as Marco Krattiger/Florian Breer and Agatha Bednarczuk/Duda Lisboa were the winners of the King of the Court 2020.
Breer and Krattiger, who started their partnership less than two months ago and who have played in just one tournament since then, entered the final round of the event as the dark horses, but they left no questions about their merits by winning all three matches of the session to finish ahead of second-placed Anders Mol/Christian Sorum of Norway and third-placed Piotr Kantor/Bartosz Losiak of Poland.
“It’s just amazing that we are the Kings of the Court,” the 21-year-old Breer, a FIVB U-17 world champion in 2014, said about their victory. “Once we made it to the final, our plan was to go all in from the service line and to fight for every ball and that’s how we did it.”
The Swiss, who saw their national tour season cancelled because of the coronavirus pandemic, appreciated the opportunity of competing against some of the best players in the world in a different format over the week.
“The organisers have put together an amazing event,” the defender added. “It was great to be able to play in a tournament of such a great level after everything we had to deal with over the last months and I hope we can have more events like this in the future.”
The other two teams competing in the final round were Belgium’s Dries Koekelkoren/Tom van Walle, who finished fourth, and Germany’s Julius Thole/Clemens Wickler, who were fifth.
For the women, the 2018 FIVB Beach Volleyball World Tour Finals winners Agatha and Duda were the first to reach 15 points in the final, where they took on not just the home teams of Emi van Driel/Mexime van Driel and Sanne Keizer/Madelein Meppelink, the second and third-placed duos respectively, but also the loud Dutch fans who supported their local players at the stadium.
“Both Dutch teams are really strong and the van Driel sisters play really fast,” Duda reflected. “We prepared really hard for this tournament and I’m very glad about how well we played. It was fantastic to spend these days here.”
The victory was even more special for the Brazilians, who were the last among all the competitors to return to the sand after the suspension of play caused by the coronavirus pandemic. Agatha, a Rio 2016 Olympic silver medallist, summarized their feelings about the week they spent in Utrecht.
“It’s our third time in a King of the Court tournament and we finished fourth in the other two,” Agatha said. “We came here determined to win it this time and it’s marvellous that we did it. It’s our first time playing since March and while some of the other teams were back competing on their national tours a few weeks ago, we were still working out at home in different cities. I think we enjoyed our time at home a little bit, but nothing beats being on the court.”
Switzerland’s Joana Heidrich and Anouk Verge-Depre finished fourth, ahead of Americans April Ross and Emily Day, who joined forces for the event and ranked fifth.
Quick links:
King of the Court 2020
FIVB Beach Volleyball World Tour
Olympic Games Tokyo 2020
Facebook
Twitter
Instagram
Youtube