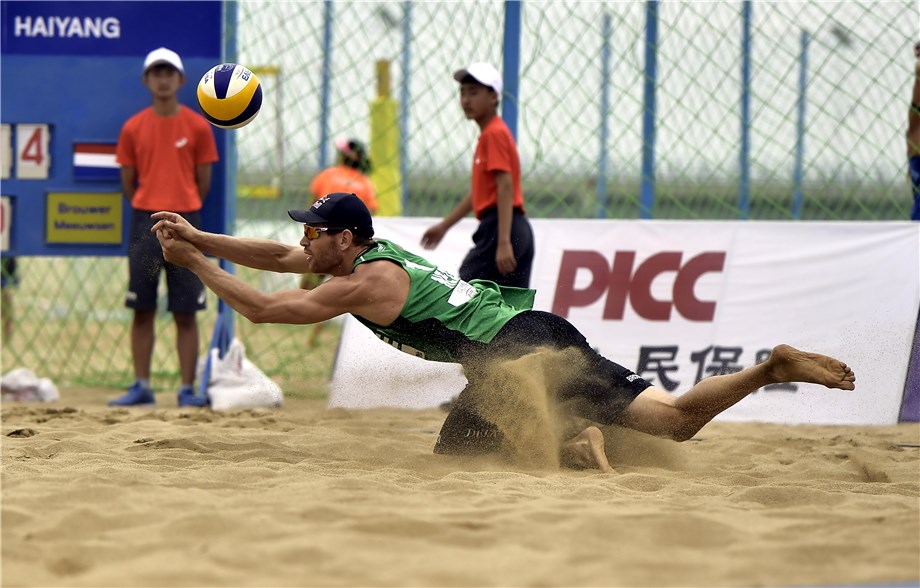 Reaching for Mikasa is Alexander Brouwer of the Netherlands Friday at the FIVB Tokyo Beach Volleyball Olympic Qualification tournament in Haiyang, China.

Brouwer and Meeuwsen defeated both of their main rivals in Pool J on Friday with a 2-0 (21-17, 21-9) win in 29 minutes over Martins Plavins/Edgars Tocs of Latvia and a 2-0 (21-13, 21-18) victory in 37 minutes over Andre Loyola/George Wanderley of Brazil.
Even if the Dutch drop their remaining Pool J match to Mathias Berntsen/Hendrik Mol of Norway, Brouwer and Meeuwsen still advance to Saturday's finals with the winner of the match between Latvia and Brazil.  Andre and George have defeated Plavins and Tocs twice this season while the Dutch are playing their first FIVB match against Berntsen and Mol.
"It's great to be in a position to play in the final matches on Saturday," said the 29-year-old Brouwer. "It has been a long three days of play so far, especially with Robbie having stomach issues Thursday that caused us to forfeit our afternoon match to the Swiss. Robbie felt a lot better today and we defeated two good teams. Tomorrow brings more challenges, so we are back to the hotel to get some needed rest.”
Despite leading Pool I with a 2-0 record after defeating teams from Switzerland and Italy on Friday, Ilya Leshukov and Konstantin Semenov of Russia could still finish third in their group. However, the Russians could clinch their group outright by defeating Poland's Piotr Kantor and Bartosz Losiak in their final Pool I match Saturday morning.
A win by Kantor and Losiak over the Russians coupled with a victory by Daniele Lupo/Paolo Nicolai of Italy over Mirco Gerson/Adrian Heidrich of Switzerland would create a three-way tie at the top of the group with the two advancing teams decided on point and set ratio among the three deadlocked pairs.
A Lupo/Nicolai win over the Swiss coupled with a Leshukov/Semenov victory over Poland will secure the Italians a spot in the finals. An Italian setback and a Russia win would create another three-way tie for the second spot in Pool I with the team with the best point or set ratio advancing with Leshukov/Semenov to the finals.
Once the final two matches are set, the winners of those two contests will qualify their countries for the Tokyo 2020 Olympic Games. The losers will still have an opportunity to qualify for the Summer Games via the FIVB World Tour or Continental Cup pathways.