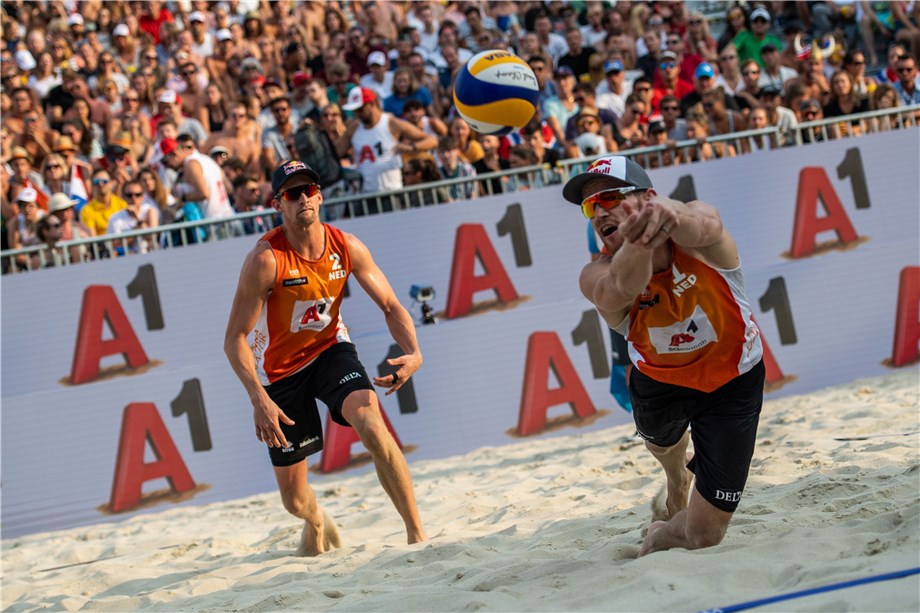 Lausanne, Switzerland, May 18, 2020 – Alexander Brouwer and Robert Meeuwsen told beach volleyball fans that they are well aware what gold medal glory at Tokyo 2020 would mean to them, having answered their questions in a Facebook Q&A that you can watch below.
The Dutch pair won bronze at Rio de Janeiro 2016, and while they have yet to book their place in the Games that will now take place from July 23 to August 8, 2021, they are on course for qualification as they sit seventh in the FIVB Olympic Rankings, with the top 15 on June 13, 2021 earning a berth for their country.
Brouwer and Meeuwsen have a good understanding of what topping the podium at Shiokaze Park would mean.
In 2013 they were catapulted into the big time when they won gold at the Mazury 2013 FIVB Beach Volleyball World Championships having started the season with the more modest aim of reaching an FIVB Beach Volleyball World Tour quarterfinal. Doing so meant they would have qualified for the next level of funding from the Dutch Olympic Committee.
“A gold medal will put you in the books for ages,” Meeuwsen said. “If you look at the great names that have been in beach volleyball, they have all won a gold medal and that is why people think they have done so well.
“You can win everything, but if you don’t do well at the big tournaments it is still something people remember.”

Brouwer and Meeuwsen won bronze at the 2019 Tokyo 4-Star World Tour event that served as the Tokyo 2020 Test Event, just as they did at the Rio 2016 4-Star which came six months before the 2016 Olympic Games.
At Rio 2016 the duo lost to eventual Olympic champions Alison Cerutti and Bruno Schmidt of Brazil in the semifinals at Copacabana Beach.
They recovered to beat Russia’s Konstantin Semenov and Viacheslav Krasilnikov 2-0 (23-21, 22-20) to cap a memorable Olympic debut and become the first Dutch team to win an Olympic medal.
“The Olympic Games semifinal, on the court at Copacabana, with 10,000 or 11,000 Brazilian fans going crazy for Alison and Bruno,” Brouwer said when asked about his favourite memory from his career.
“Our families were in the stand, but it was impossible to hear them because of all the cheering Brazil fans. I think it was one of the most special surroundings and a special place to play beach volleyball.”
Among the other topics discussed were what goes into being a strong blocker, what they take in their kit bag, and which team causes them the most problems on court.
As well as an Olympic gold medal, the duo will be aiming to win gold at their favourite tournament, which is the Gstaad 5-Star that takes place in the Swiss Alps.
They won silver there in 2019 and have also finished with bronze, but a Gstaad gold medal continues to elude them.
“Gstaad is such a unique place and one of the most special places,” Meeuwsen said. “You fly to Geneva and take the shuttle through the mountains and it is already such a sight.”

Read more:
Team of the Week: Brouwer and Meeuwsen