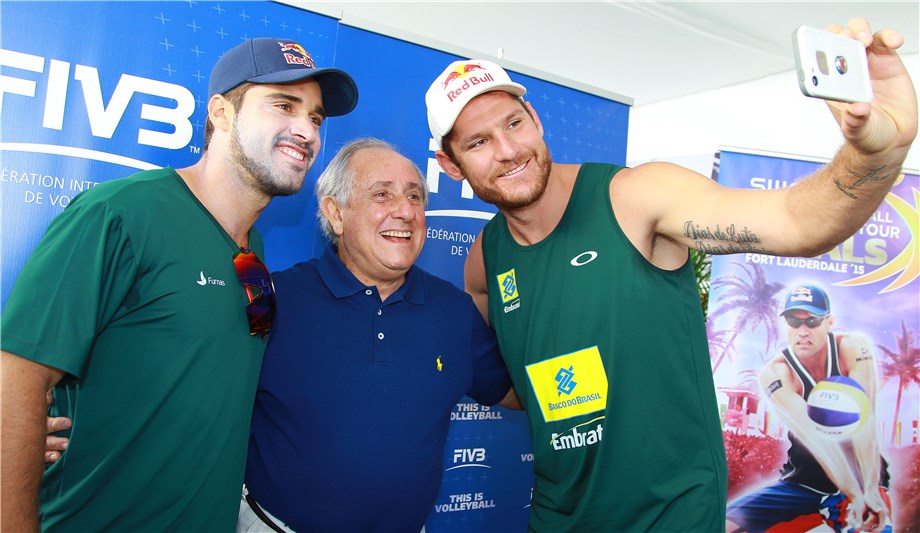 Lausanne, Switzerland, October 8, 2015 - The FIVB World Tour season started sluggishly for Alison Cerutti and Bruno Oscar Schmidt with only a fourth, two ninths and a 17th-to the Brazilians credit in the first four events on the 2015 international calendar.

But the Brazilians did not lose faith in their abilities or question their partnership as the pair posted seven-straight “final four” finishes to end their international campaign as the top team on the 2015 FIVB World Tour with six gold medals highlighted by the world championships trophy in July at The Hague and the SWATCH Finals  crown in October.

“It is a season to remember,” said the 29-year old Bruno, who is the running for the FIVB World Tour’s most outstanding player and top defender honors.  “After placing fourth in Moscow at the end May, we really struggled in the next three events in Croatia (17th in Porec), Norway (ninth in Stavanger) and the United States (ninth in St. Petersburg).  But we did not panic and knew we were close to putting our game together to compete at the highest level.”

In winning only 13 of their first 20 FIVB World Tour matches this season, Alison and Bruno entered the 2015 FIVB “senior” World Championships in The Netherlands as the 14th-ranked team on the international circuit and were listed only third among the Brazilian pairs behind Evandro Goncalves/Pedro Solberg (second) and Emanuel Rego/Ricardo Santos (seventh).

“Although some were doubting our chances to win the world championships, we were confident,” said Bruno.  “It wasn’t like we were playing really bad.  In six of our seven loses, we were close.  We never lost faith in each other as we knew that once we cleaned up our game, we would starting winning.”

Winning they did by capturing the FIVB World Championships with eight-straight victories in The Netherlands with only two three-set matches.  In the gold medal finale, Alison and Bruno overcame a first set defeat and several match points in the deciding set to defeat Dutchmen Reindeer Nummerdor and Christiaan Varenhorst 2-1 (12-21, 21-14, 22-20) in the 54-minute title match.

After netting the world championship trophy in The Hague July 5, Alison and Bruno won the next four Grand Slam stops in Switzerland (Gstaad), Japan (Yokohama), the United States (Long Beach) and Poland (Olsztyn) to amass 4,200 FIVB World Tour points to move ahead of compatriots Evandro and Pedro as the top team on the international circuit.

“That was amazing run,” Bruno noted.  “We stumbled twice in pool play in Gstaad and Long Beach, but still maintained our consistency on the sand.  Just think, we won 36 of 38 matches during that five-event run.  Since we were the world champions, we had to play our very best since everyone was out to defeat us.”

Prior to the Rio Open, a “test” for the 2016 Summer Games at the start of September, Alison and Bruno were named to the Brazilian Olympic Beach Volleyball for the Copacabana beach event.  The pair won their next five matches in the Rio Open, but finished fourth for their first non-gold medal finish in six events.

“Give credit to those teams that defeated us in Rio, they just played better than us,” Bruno noted.  “I think we had one week off in a three-month period, so we played tired.  And, we had already secured out Olympic berth and the points title on the FIVB World Tour, so we were playing like a team with nothing at stake.”

Alison and Bruno completed their Beach Volleyball “trifecta” this past weekend in the United States where the Brazilians topped the podium at the SWATCH FIVB World Tour Finals in Fort Lauderdale by posting a convincing 2-0 (21-15, 21-13) win in 38 minutes over Americans Phil Dalhausser and Nick Lucena.

Following the match where Alison and Bruno netted the largest winner’s paycheck of US$100,000 to become the World Tour Finals Champions, Dalhausser said that even on his team’s best day, the Brazilians are tough to beat.

“You have to be able to take them out of their comfort zone and we were unable to do that today,” Dalhausser said after the match.  “We could not get much going and they were really good at side out today.  That is what happens when you are not at the top of your game and you are playing the No. 1 team in the world.”

Lucena said that the Brazilians were simply dominant on their serve and that made all the difference in the world.

Dalhausser, who is considered as the world best all-around player due to his blocking, setting and service game, said he could not make a difference with his jump serve in Sunday’s finale.  “They defended my serve real well,” the 6-foot-9 Dalhausser said.  “They passed real well, and we could not get much going.  I saw a really good team out there that really deserved to win and they deserve their ranking of number one in the world.”

By collecting the richest gold medal prize in international Beach Volleyball history, Alison and Bruno set the single-season men’s FIVB World Tour winnings record for earnings in a season with $445,500.  The previous record was $387,700 was set by Phil Dalhausser and Todd Rogers in 2010.

With Brazilian men’s pairs winning 16 of the 27 FIVB World Tour points championships since 1990, Alison and Bruno become the 11th team from the South American country to top the list.  Alison topped the points lists for the second time with the first being with Emanuel Rego in 2011.  Bruno finished a close second (350 points) with Pedro Solberg in 2013 behind Aleksandrs Samoilovs and Janis Smedins of Latvia.

Impressive totals for a team that ended their international season by compiling a 60-12 match mark against the world’s best teams.  But for Alison and Bruno, the biggest prize is still to be achieved - Olympic gold on Copacabana.

Don’t get Alison and Bruno wrong, they are delighted with what they achieved this season.  “It is a real honor for us to be the best team on the world tour with a world championship trophy in our possession and a $100,000 payday to our credit,” said Bruno.

But Alison and Bruno’s main focus now is to be on the Olympic podium next August on Copacabana.  They are the team to beat, so the Brazilians still face a big challenge in protecting their No. 1 world ranking enroute to winning a gold medal at the Rio 2016 Olympic Games.