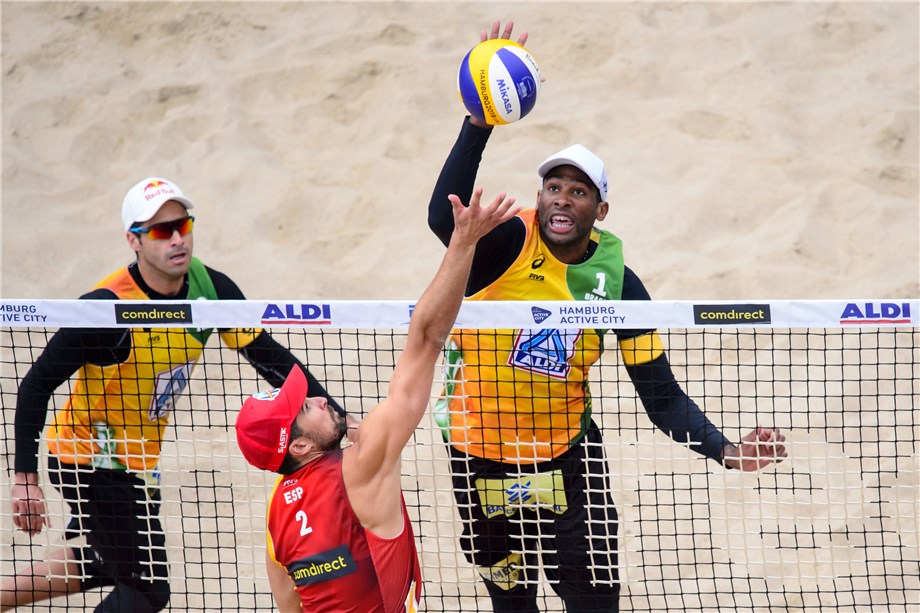 Hamburg, Germany, July 3, 2019 - Bruno Oscar Schmidt and Adrian Gavira walked off court 2 at Am Rothenbaum Stadium, sharing a couple of words and even a few smiles.
Quick links - Beach volleyball:
FIVB Beach Volleyball World Championships Hamburg 2019
FIVB.com - Beach volleyball
Facebook
Twitter
Instagram
Bruno and partner Evandro Goncalves had just vanquished Gavira and Pablo Herrera in the final match of pool play in the FIVB Beach Volleyball World Championships presented by comdirect and ALDI Nord and there were even a couple of heated moments during the match.
But the second the final ball hit the sand, the mutual respect between the veterans was on display.
“I always loved to watch them and it’s an honour to play this team, especially in this event,” Bruno said moments later. “What they have done up to now is very impressive.”
This is the 110th FIVB event in which Herrera, 37, and Gavira, 31, have participated together. They are still going strong in a partnership that began in 2009. They have participated in two Olympics together and are taking aim at a third in the 2020 Tokyo Games.
Did they ever think that their partnership would last more than a decade?
“Why not?” Herrera said, smiling. “And we’re still playing good together.”
Gavira echoed his partner’s thoughts.
“We are coming in with confidence, we are comfortable on the court,” he said. “So why not?”
Herrera and Gavira have captured three FIVB titles and four European Tour (CEV) crowns along the way. They might not have collected as many titles as they want, but they always have a say in who does.
Even though the Brazilians scored a 2-0 (21-11, 21-16) victory in this matchup, Bruno and Evandro knew exactly what they were up against when the matchups were announced for the World Championships.
“If you want to ask who has the best sideout team, everybody will say the Spanish,” Bruno said. “That’s the way they put pressure on the other teams. They have a very hard sideout and they love to serve, they can put a lot of pressure on you with their serve. It’s always hard to play against them.”
Herrera, a silver medallist in the Athens 2004 Olympics, is trying to reach his fifth Olympiad. Along the way, all he done is gained respect, on and off the court.
“They are both great players and great guys,” Evandro said. “I don’t know how many Olympics, four or five, it’s a lot. They are players we always get along with well, we respect each other a lot.”
This is the sixth World Championship event the Spaniards have entered. Four times, they’ve finished in fifth place.
What do they need to do to crack their way to a higher finish?
First, we arrive to 5, then we’ll see. We’ll see the draw and maybe we will have good luck with the draw and we have a good chance.
“Not yet,” Herrera said. “It’s a long way to arrive to the final.”
They learned a long time ago not to look past the task at hand as they enter the knockout phase of the tournament, yet they know what the big picture tells them.
“It would be a perfect situation for us and for Spanish beach volleyball,” Gavira said. “We want to fight for that, but we don’t think about that yet.”