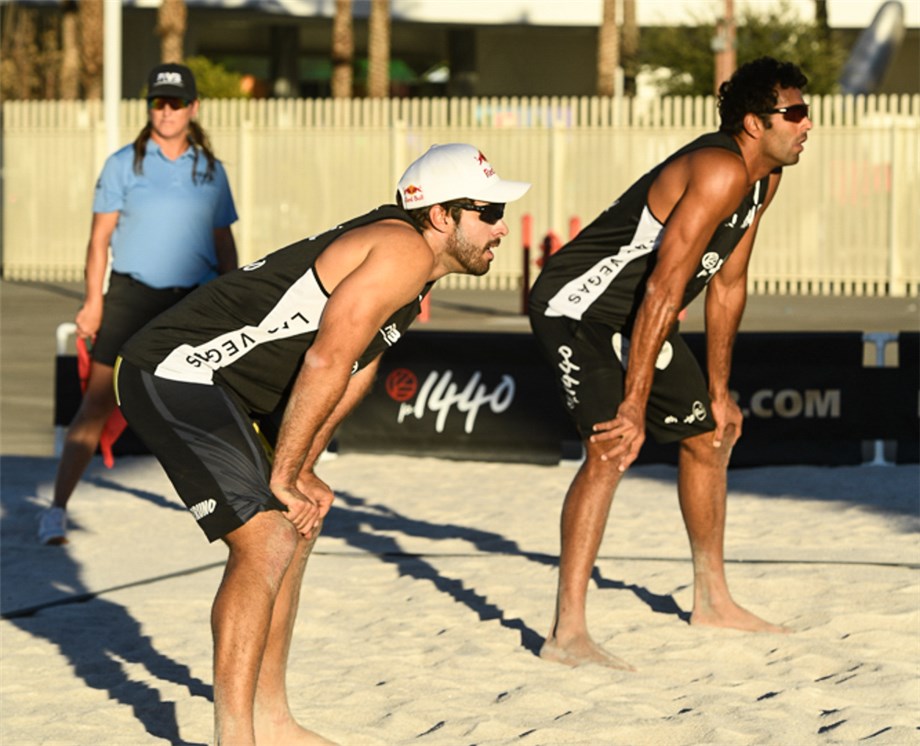 The Hague, Netherlands, January 4, 2019 – Bruno Schmidt and Pedro Solberg are fast becoming the FIVB Beach Volleyball World Tour’s leading bromance, one that has run and run since 2006.
That year the Brazilian pair became U21 world champions in Myslowice, Poland, but it took them another seven years before they teamed up again, in time for the 2013 season.
The partnership lasted a year and they finished second in the FIVB Beach Volleyball World Tour Rankings having won two World Tour gold, two silver and a bronze.
Quick links - Beach volleyball:
FIVB Beach Volleyball World Tour
FIVB.com - Beach volleyball
Latest Videos
Facebook
Twitter
Instagram
Bruno then teamed up with Alison Cerutti for a partnership that swept all before them. They won gold at the Rio de Janeiro 2016 Olympic Games, the Netherlands 2015 FIVB Beach Volleyball World Championships and the Toronto 2016 FIVB Beach Volleyball World Tour Finals.
However, since June 2018 Bruno and Pedro have been reunited and are currently playing at the 4-Star Dela Beach Open in The Hague.
“Last year was a bit strange,” Bruno said. “I was injured, and returned to play with Pedro, a guy I have played with before and with whom I did so well. I have a good vibe with him and we get along.
“When we split it was the middle of the season, we didn’t have much time to think about who would make the new teams. Andre Stein and Evandro Goncalves weren’t going to split as they were the best team and it made no sense. After that I thought about Pedro because we played together before and got along well. I love the idea and the new situation and I like having the chance to start afresh and build it up again.”
The Dela Beach Open is Bruno and Pedro’s eighth World Tour tournament together since they reunited.
The 4-Star Ostrava tournament in June marked their return and they finished in ninth place. Since then their best finish was a quarterfinal finish at the Vienna 5-Star.
They have focused on training since the Las Vegas 4-Star in late October and once they have finished in The Hague they will have a two-month block before their next World Tour competition.
“Now we have more time to build and develop,” Bruno said. “We have the event here, but after this we will have more time to practice and go again. We will have two months clear to reach our best.
“Tokyo 2020 is everyone’s goal, but right now I am just thinking about being my best. We are just focused on doing our best tournament by tournament.”
“The World Tour has changed a lot in six years. Now I am more focused and know what I need to do to reach my best again. I’m very excited to put this on the table and I’m sure if me and Pedro adapt our team to how beach volleyball is now with these huge players we can cause problems for the other teams.”
The tournament runs from January 2-6 and is being played on indoor beach courts at the Sportcampus Zuiderpark. It is the second year in a row that The Hague has hosted a tournament at this time of year and it has proved popular among the players who are able to compete at a top-level tournament when they would normally be involved in warm weather training.