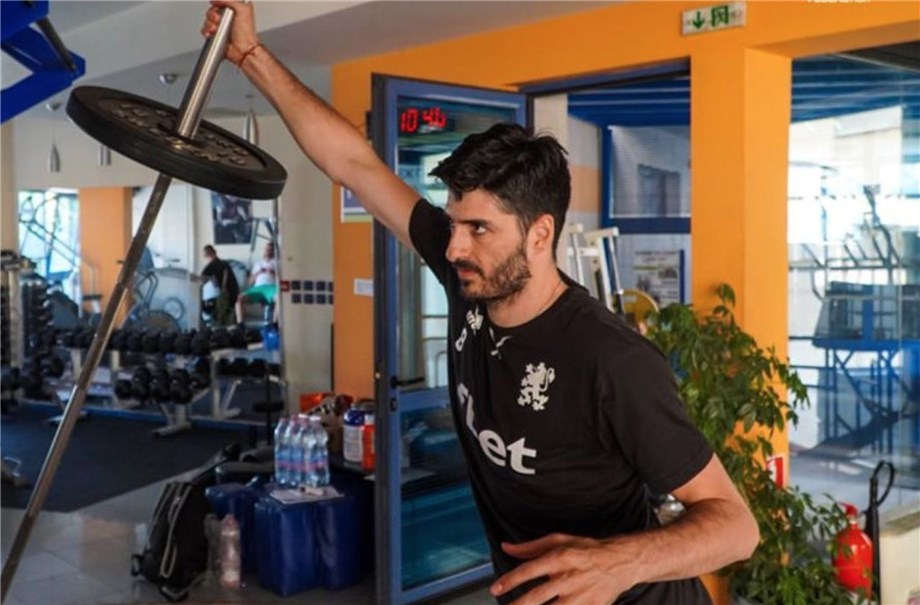 Todor Skrimov pumps up at the gym

Sofia, Bulgaria, July 1, 2020 – The players of the Bulgarian men’s national team are excited to be back in the gym and resume training for the 2021 season, which is set to start as early as January.
Italian head coach Silvano Prandi, whose previous contract with the Lions expired with the end of the continental Olympic qualifications earlier this year, has been reappointed to the job by the Bulgarian federation, but now he will be assisted by legendary player Nikolay Jelyazkov. The Best Blocker of the Atlanta 1996 Olympics has been partnered with Prandi with the idea to eventually inherit the head coach position himself.
Prandi and Jelyazkov selected a roster of 17 players for a training camp in Sofia that started on June 22 and is scheduled to last until August 15. For them this is an essential part of Bulgaria’s preparation for the 2021 season, which includes participation in the FIVB Volleyball Nations League as well as the CEV European Championship, the qualifications for which should take place in January. They hope to play some friendly games in early August, should the coronavirus situation allow it.
“We must be patient and careful, but it is very important to hold this camp for an opportunity to lay the foundations for January’s qualification. I will also be able to see some players who have not been part of the national team so far,” Prandi said.
“It's hard to start almost from scratch. We must do it carefully and gradually, as there will be a high risk of injury. But we are motivated, as there won’t be much time to prepare just before the qualifiers in January and we must make the most of the time now,” said the outside hitter of Bulgaria and Russia’s Yenisei Krasnoyarsk Todor Skrimov, one of most experienced members of the Lions’ squad. “I continue to do what I have always strived for - to give my best. Now it is even more important to be perfect and set a good example for the younger teammates. Among them, there are players with great potential, which they have to develop to the maximum for the future of the national team.”
Top star Tsvetan Sokolov’s thoughts follow a similar direction. The Bulgarian opposite, who spent the last club season with Russian powerhouse Zenit Kazan before transferring to Dinamo Moscow for the upcoming season, admitted he really missed the gym during the lockdown.
“I am feeling really well now. The workouts you do at home have nothing to do with a real gym workout. I am happy to be back to work,” Sokolov said. “I think it was a very reasonable decision to postpone or cancel the official matches this summer. We must not risk the health of athletes, coaches and supporters. This long period of preparation will be a big plus for everyone because, when the club season starts, we won't have time. Let's say that 70% of the preparations for next year's competitions must be done now. It is a step forward to add some younger players to the squad, so these athletes get the opportunity to develop, gain experience and help as much as they can towards the overall performance of the team.”
20-year-old outside hitter Georgi Petrov, who recently transferred from Bulgarian champions Neftohimik 2010 Burgas to France’s Chaumont VB 52, also coached by Silvano Prandi, is one of the youngsters expected to take on a key role in the squad after experienced players, such as captain Viktor Yosifov and libero Teodor Salparov, put an end to their national team careers with the end of the Olympic qualifications last January.
“The composition of the team has changed a lot and we need time to find cohesion, so everyone is here for a good reason,” he pointed out. “The absence of Salparov and Yosifov will certainly be felt, because they are athletes with infinite experience and have helped a lot through the years. But we see that many of the young athletes have qualities and I think if we develop them and if we train together it is only a matter of time to get the results.”
Bulgarian national team roster
Setters: Georgi Bratoev, Georgi Seganov, Vladimir Stankov
Opposites: Tsvetan Sokolov, Velizar Chernokozhev
Outside spikers: Asparuh Asparuhov, Georgi Petrov, Gordan Lyutskanov, Martin Atanasov, Todor Skrimov
Middle blockers: Aleks Grozdanov, Iliya Petkov, Krasimir Georgiev, Martin Krastev, Svetoslav Gotsev
Liberos: Kristian Petrov, Petar Karakashev
More volleyball from Bulgaria:
Kaziyski hopes to boost future of Bulgarian volleyball
Bulgarian Lionesses start preparations for summer 2021
Best of Tsvetan Sokolov’s Facebook Live answers
Player of the Week: Tsvetan Sokolov
FIVB deeply saddened by passing of Bulgarian volleyball legend Todor Simov
Samuil Valchinov: Keen to succeed
Get to know: Nikolay Uchikov
Zhana Todorova: VNL experience – great asset for Bulgarian volleyball’s future
Bulgaria captain Yosifov chasing targets in VNL
Top guns Aleksiev and Sokolov back to Bulgarian roster
Bulgaria’s coach Prandi announces plans for upcoming season
Bulgaria eager to play in the big leagues again
Zhana Todorova: VNL is where we belong
Quick links - Volleyball:FIVB.comFacebookTwitterInstagramYoutube