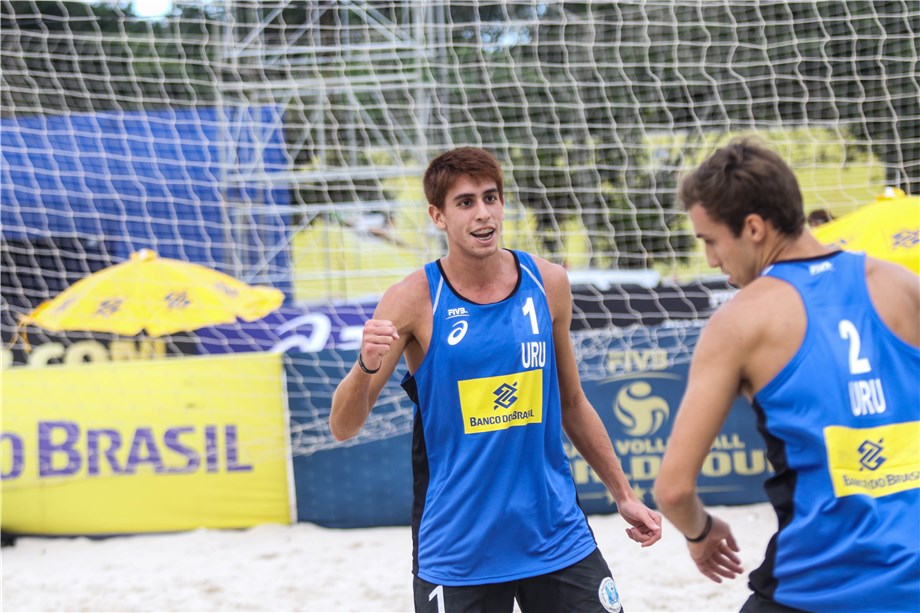 Itapema, Brazil, May 15, 2019 – Marco Cairus and Mauricio Vieyto became the first Uruguayan men to compete at the FIVB Beach Volleyball World Championships when they qualified their nation for the 2017 edition of the tournament, in Vienna, Austria.
That was the first time the two South Americans, who were just 20 at the time, competed internationally against the beach volleyball elite at a professional level. Understandably, their experience in the Austrian capital did not last long as Cairus and Vieyto lost all three pool play matches in straight sets, finishing 37th in the tournament.
But it was not a frustrating week for them at all.
“The experience in Vienna was great,” Vieyto recalled. “We lost all three matches, but we left the tournament with that good feeling that we had played well, some sets were really close and we were playing the best teams in the world.”
Two years later, the young Uruguayans will have another chance on the biggest stage as they have secured a spot at the 2019 edition of the World Championships, which will take place in Hamburg, Germany, from June 28-July 7, via the South American confederation qualifier.
Quick links - Beach volleyball:
FIVB Beach Volleyball World Tour - Itapema
FIVB.com - Beach volleyball
Facebook
Twitter
Instagram
Despite having just four World Tour events under their belts, including this week’s Itapema Open, the Uruguayans are hoping they can show the improvement they have made over the last two years.
“We’re confident we’ll do better this time,” Vieyto added. “We’ve played a lot since 2017 and we are more mature now. At the same time we realize that other teams have improved too, so the level is supposed to be even higher, but I feel we’ll be better prepared this time. We played well last time, we just need to be more consistent.”
Their extended playing time includes a notable participation in the South American Tour over the last years. In March, they won the South American Beach Games in Argentina.
“Our goal in Hamburg is to make a step forward from Vienna,” Cairus explained. “We just need to stick to what we’ve been doing and to keep preparing the best we can. It’s great that we managed to play here in Itapema this week, the tournament has such a great level. We want to play at our best in Hamburg and our first goal is to get out of pool play and see where we can go from there.”
With Uruguay still being an emerging beach volleyball nation in South America, the 22-year-olds know that the future of the sport in their country depends heavily on their international success. Their hopes are that a good showing in Germany can open the doors of international beach volleyball to other Uruguayans.
“Beach volleyball is not greatly developed in Uruguay and to be able to represent our country at the most important event on the planet is amazing,” Vieyto added. “We try to play as much as we can and to train with teams from other countries when we have a chance in order to keep improving. We hope that we can do well and that these results get us more support going forward. We saw that happening with other sports and we want beach volleyball to benefit from it too.”