Can the McNamaras duplicate the Lima twins' World Championship effort? 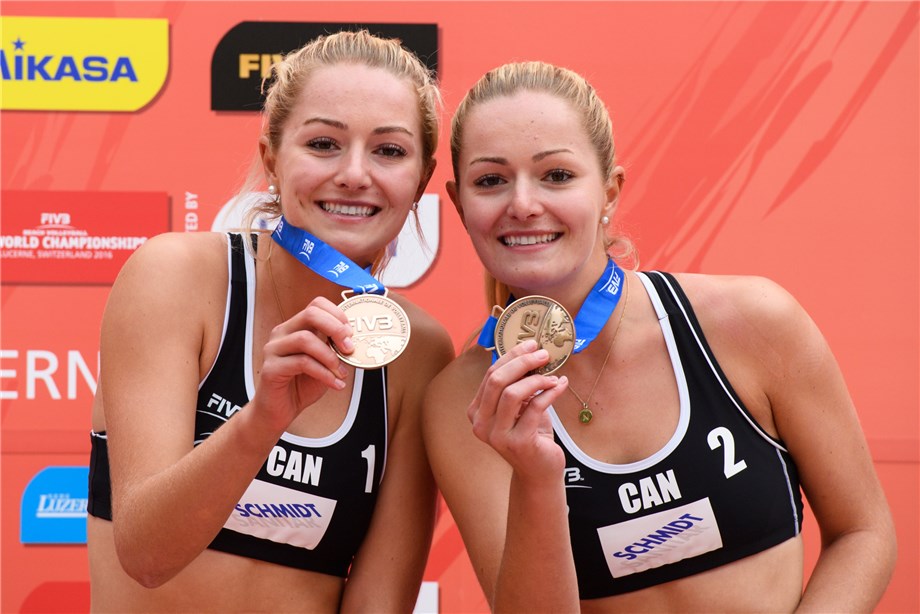 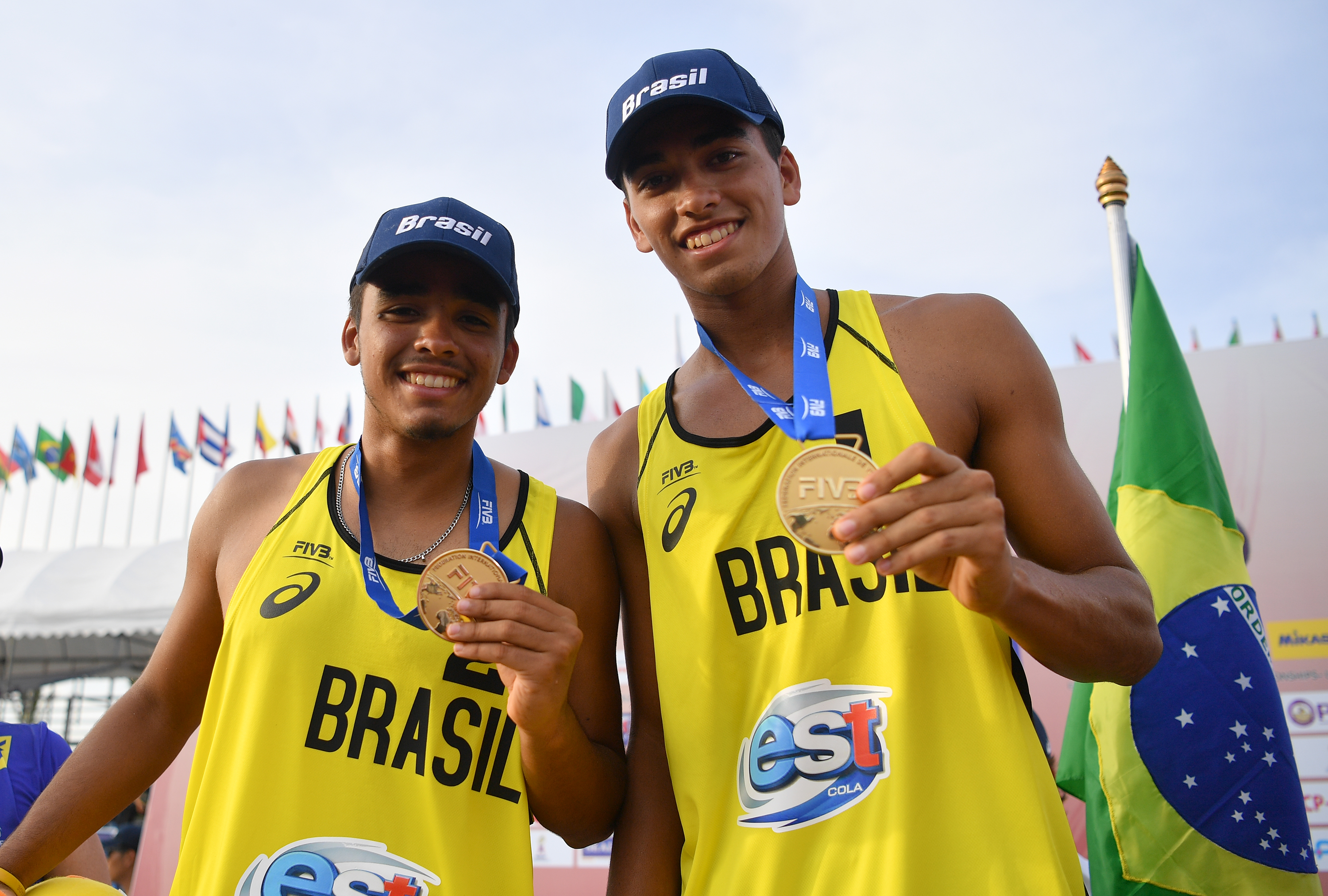 Rafael (left) and Renato Lima of Brazil
Seeded 25th in Hamburg, the 21-year-old McNamaras will be competing in the same group (Pool A) with top-seeded Sandra Ittlinger/Chantal Laboureur of Germany, 24th-seeded Marta Menegatti/Viktoria Orsi Toth of Italy and 48th-seeded Patricia Caballero/Michelle Valiente of Paraguay.
“We are looking forward to competing in Hamburg against the world’s best players,” said Nicole McNamara as the Canadian twins completed their American collegiate career in early May at a beach resort on the Gulf of Mexico by leading UCLA to the women’s collegiate national beach volleyball title.
It was the McNamaras' second straight collegiate crown at UCLA. The twins played USC in the national championship game who were led by Latvian Tina Graudina, who will also be competing in the FIVB World Championships with Anastasija Kravcenoka.
Eleven (11) days after winning the American collegiate title, the McNamaras were in Brazil and posted pool play wins over higher-seeded teams from the Netherlands (Sanne Keizer/Madelein Meppelink) and Germany (Ittlinger/Laboureur) before losing in the second round of bracket play to Svetlana Kholomina/Nadezda Makroguzova of Russia.
All three of the McNamara's matches at the Itapema Open were against pairs that will be competing in the 2019 FIVB World Championships that start on June 28 in Hamburg. The Dutch, German and Russian teams earned their spot in the World Championships via their ranking on the FIVB World Tour while the McNamaras were a NORCECA continental qualifier.
The McNamara's Itapema pool featured two teams that will be seeded in the top eight at the World Championships in Hamburg, including top-ranked Ittlinger/Laboureur and eighth-seeded Keizer/Meppelink, the reigning European champions.
Kholomina and Makroguzova, who are 21 and 22 years old, respectively, are considered Russia's leading women's team on the road to the Tokyo 2020 Olympics as the pair have captured one FIVB World Tour gold medal and won three European youth championships in 2013, 2017 and 2018.
The Russians also have two silver medals from the FIVB Under-21 World Championships where Kholomina and Makroguzova lost the 2016 (Lucerne, Switzerland) and 2017 (Nanjing, China) gold medal matches to Eduarda "Duda" Lisboa and Ana Patricia Silva of Brazil.
The McNamaras, who are the reigning World University Games champions, finished third (2016) and fifth (2017) in the two U21 World Championships as the Canadians lost to Kholomina and Makroguzova in the 2016 semifinals in Lucerne.
“The gold medal victory at the 2018 World University Games in Germany was a highlight for me,” said the 21-year old Nicole. “It was special because it was our first international gold medal.”  In the Munich finale on July 13, the McNamaras defeated Spain’s Maria Carro/Paula Soria 2-1 (21-14, 18-21, 15-10) in 45 minutes. 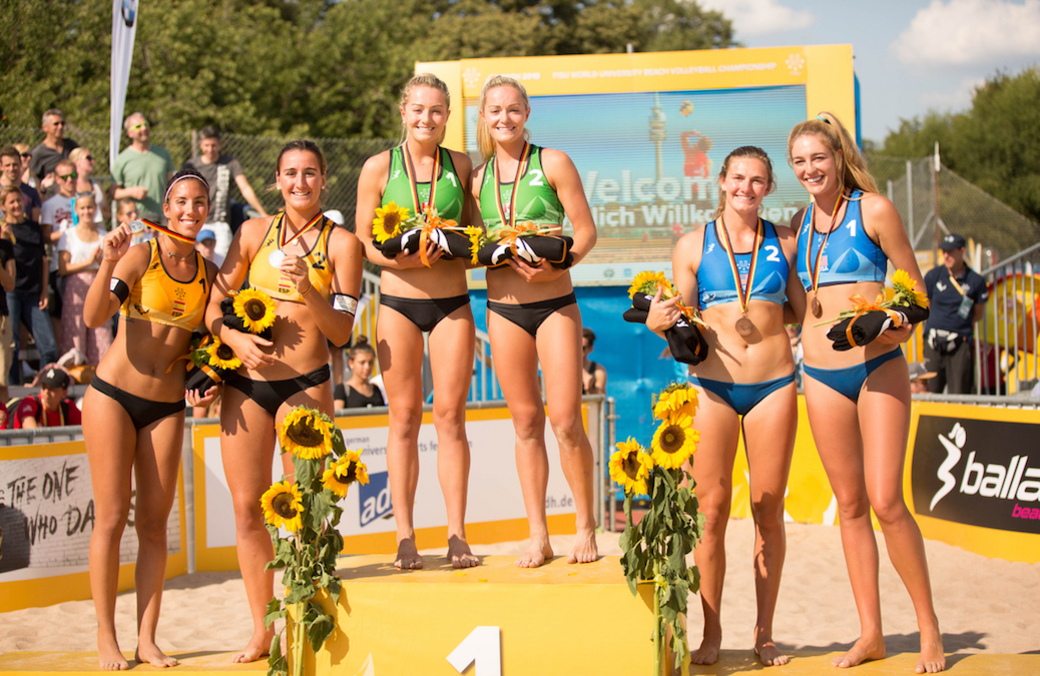 The 2019 World University Games podium featured the McNamaras with Spanish and American teams.
Speaking to fivb.com, the McNamaras answered the following questions.
Question - For Megan, how have your collegiate beach volleyball experiences at UCLA prepared you to compete internationally, especially since your coaches (Stein Metzger and Jenny Johnson Jordan) have Olympic and FIVB World Tour experience?
Answer – The NCAA has prepared us to compete internationally on the FIVB World Tour. The NCAA season is very short and compact which forced us to learn how to manage ourselves under intense, stressful weeks of competition. We were lucky to be coached by two Olympians, bringing an international style of play to the collegiate game.
Question - For Nicole, since you have competed in 11 FIVB events (five youth and six World Tour tournaments) since 2014, have these participations helped give you an edge as one of the NCAA's top teams?
Answer – Yes, I do believe that our international experience has helped give us an edge in the NCAA. Playing on the World Tour exposed us to a very fast, physical style of the game. On the World Tour, teams are very good at fixing the set to the net no matter where the pass is and hitting the ball hard. We really had to adjust to this and focus on other elements of our game rather than relying only on our serving.
Question - For both of you. Canadian beach volleyball has developed to the point where two women's teams are listed No. 1 and No. 6 on the FIVB World Tour ranking. Since you have been competing collegiately since February, have you had a chance to practice with Bansley, Wilkerson, Pavan and/or Humana-Paredes?
Answer – We work with the coach that coaches Heather and Brandie, (Lennard Krapp) so when we are back in Toronto or if they are in Los Angeles, we will get the chance to practice with them. It is a great opportunity for us to train with one of the top teams in the world.
Question - Either Megan or Nicole.  Outside of winning the NCAA titles the past two seasons, what has been your best memories playing international - 2014 Youth Olympics, 2018 World University Games or placing fourth (Mexico) or fifth (Tokyo) at an FIVB World Tour event.
Answer - The FIVB World Tour event last October in Mexico was very memorable as we made the final four and had the opportunity to play against American Olympic and world champion Kerri Walsh Jennings. We have looked up to her since we were young.