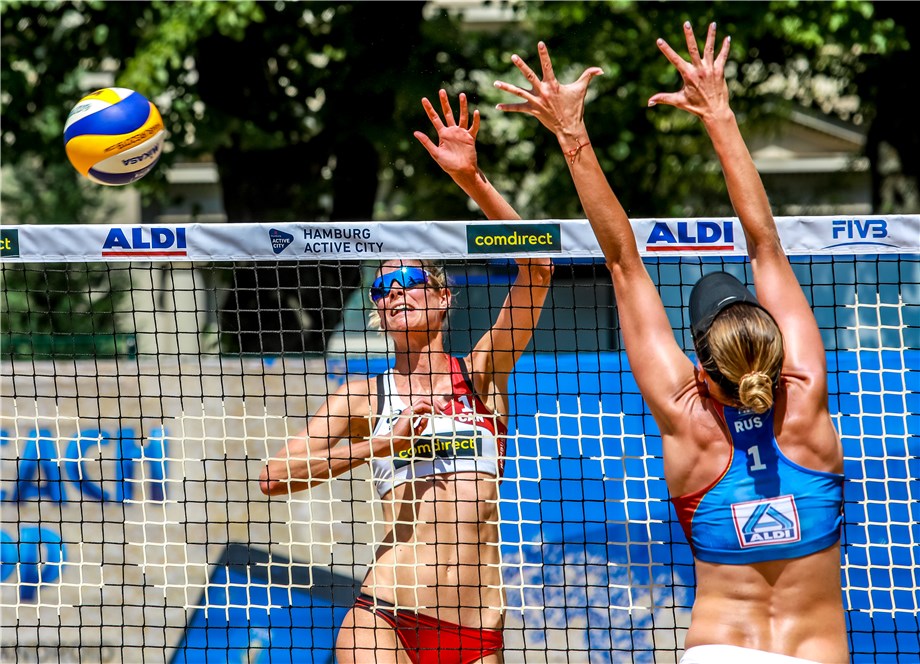 Hamburg, Germany, June 20, 2019 - Two Canadian teams, both among the best in the world, lived on the edge here Sunday in the $1-million FIVB World Championships presented by comdirect & ALDI Nord.

One survived with a victory, the other fell short. But the experience was worth it as both Canadian teams are still on the edge after two matches during pool play.

First, it was ninth-seeded Sarah Pavan and Melissa Humana-Paredes, who were two points away from losing to 33rd-seeded Russians Ekaterina Birlova and Evgeniya Ukolova. Suddenly, the Canadians scored the final three points to survive with a 2-1 (18-21, 21-17, 15-13) on a warm, breezy day at Am Rothenbaum Stadium.

Even with an epic blocking display from Brandie Wilkerson in the second, she and her third-seeded partner Heather Bansley dropped a 2-1 (21-19, 16-21, 15-8) decision to 27th-seeded Joana Heidrich and Anouk Verge-Depre.

Wilkerson and Bansley entered the tournament ranked fourth in the world, with Pavan and Humana-Paredes in the sixth spot. For 35-straight weeks, Bansley and Wilkerson were the No. 1-ranked team in the world from last October through last week.

“We are a gritty team where we like to be relentless, that’s something we hang our hat on,” said Pavan, who placed fourth at the 2017 FIVB World Championships in Vienna with Humana-Paredes. “The third set can go either way and we wanted to take advantage of the opportunity we had, and I think we did that. We were much more aggressive, our serving picked up and we took advantage of our transition opportunities.”

Pavan and Humana-Paredes are now 2-0 in Pool I and can clinch the pool with a victory over 16th-seeded Kelly Claes and Sarah Sponcil of the United States Tuesday at noon (local time). Claes and Sponcil have also opened the tournament with consecutive victories.

“As much as we evolve, there are always going to be things we need to do,” Humana-Paredes said. “I’m glad we had this battle now; we can look back at this game and take what we need from it and implement it into Tuesday’s match.”

The Swiss never trailed in the first set, but Wilkerson got right to work in the second. She had two of her six blocks in the set as the Canadians took a 4-1 lead, extended the advantage to nine points twice and weren’t challenged.

The Swiss used a 4-0 run to take a 12-6 lead in the third and that essentially put it away.
“There were definitely a lot of ups and downs on both sides but that’s because we’re both strong teams,” Wilkerson said. “We would have wished to clean up a bit more and the elements provided some challenges. That’s OK, we learn from this and move on.”

Bansley and Wilkerson, who placed fifth at the 2017 Vienna World Championships, close pool play Tuesday on centre court against 22nd-seeded Kim Behrens and Cinja Tillmann of Germany, who are also 1-1 in pool play.

“We have Germany, a team that’s new together this year and we haven’t played them yet, so we’ll have to watch a lot of video and do our homework,” said Bansley, who placed fifth at the Rio 2016 Olympic Games with Pavan. “We have the day off tomorrow to do that. We still have a chance to finish second.”