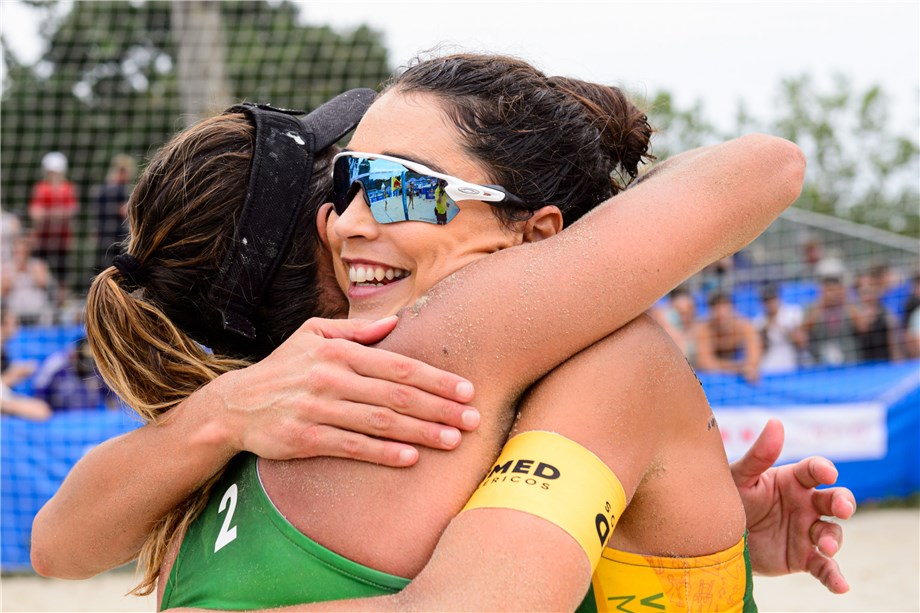 Carolina Salgado (right) gets a hug from Brazilian partner Maria Antonelli as the pair advanced to the A1 Major Vienna semifinals with two wins Friday.

Vienna, Austria, August 2, 2019 - It’s easy to see the importance of reaching the semifinals of the A1 Major Vienna presented by Swatch means to the competitors.
Quick links - Beach volleyball:
FIVB Beach Volleyball World Tour - Vienna
Facebook
Twitter
Instagram
Carolina Salgado woke up here Friday morning and promptly told teammate Maria Elisa Antonelli: “Remember, I have to keep strong for my mother’s birthday.”
Two victories later, Carolina and Maria were celebrating their run to the semifinals, where they will join two other Brazilian teams plus Canada. After they defeated Kelley Larsen and Emily Stockman of the United States to reach the final four, Carolina had to be nudged into remembering something else about the day.
“Yes, it’s my mom’s birthday! Thank you, God, for reminding me,” an exuberant Carolina said. “After the first game I was so happy I sent ‘Mom, we won!’ And just now I remembered. I was so focused on the tournament and it means so much to me.”
Isabel Salgado and Carolina are the only mother-daughter tandem to win gold medals on the FIVB World Tour, so perhaps mom will have some understanding.
For the 47th time in 413 FIVB women’s events, three Brazilian teams are in the semifinals of a World Tour tournament. Carolina and Maria Antonelli will face new mom Talita Antunes and Taiana Lima, while Agatha Bednarczuk and Eduarda “Duda” Lisboa will take on reigning world champions Sarah Pavan and Melissa Humana-Paredes of Canada. 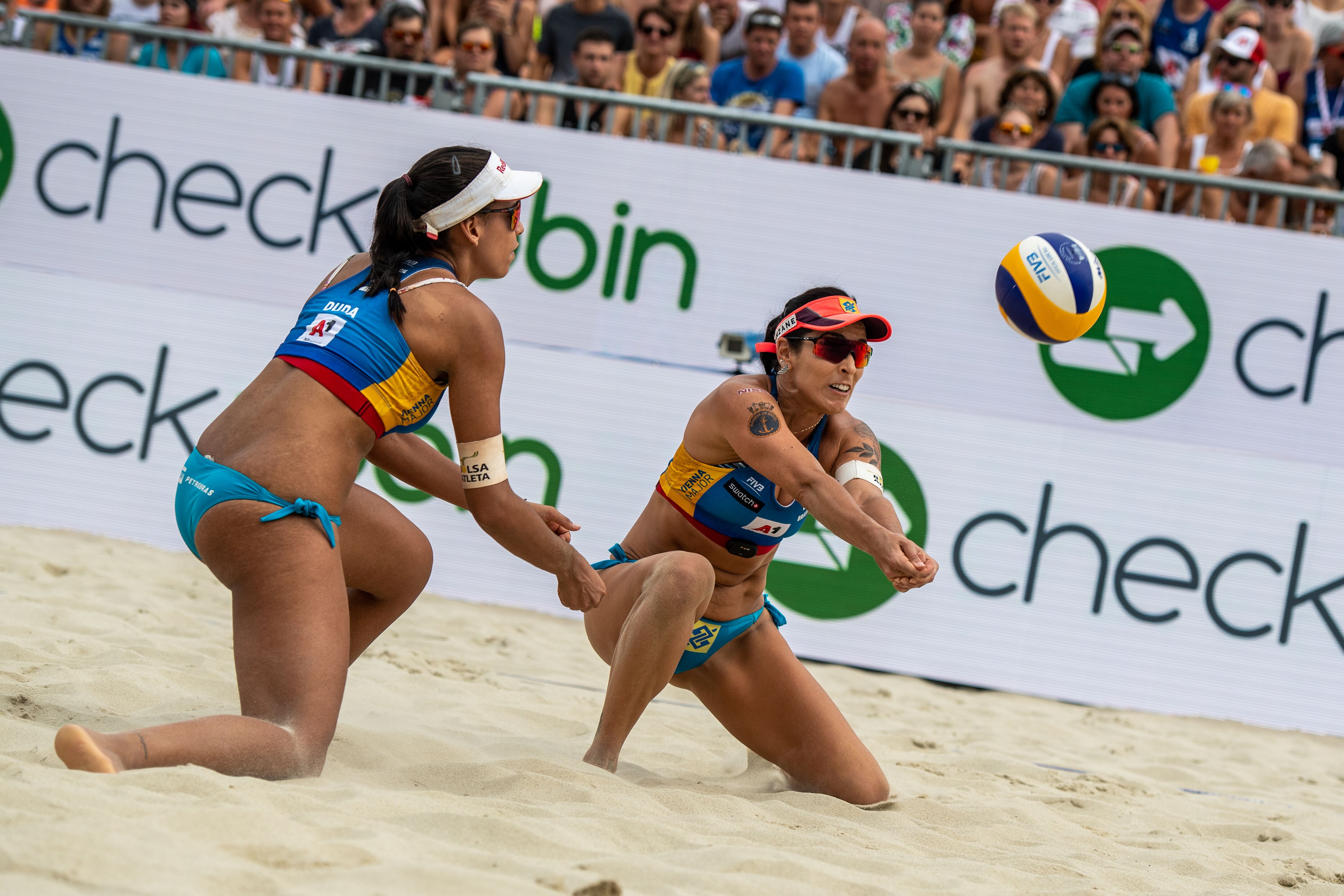 Eduarda "Duda" Lisboa (left) and Agatha Bednarczuk of Brazil
In another milestone, the victory pushed Antonelli’s career earnings over the $1 million mark, though that was another fact she may not have been aware of.
“I’m very happy, I love to play here,” Antonelli said. “It is a good atmosphere; we are playing very well this tournament and for sure it will be a very good game. I’d like to study them again, I played with Talita, I played against her a lot of times and Taiana too. It’s always difficult because we know a lot about each other. Let’s rest and think about tomorrow.”
All four teams had to win twice on Friday. Three are undefeated in Vienna and two of them had to win twice in qualifying just to reach the main draw.
Talita, who is travelling with 1-year-old son Renatinho, has a made a remarkable to return to form with Taiana. A qualifier along with Carol and Maria Antonelli, they have won six consecutive matches and dropped only two sets along the way.
“Returning wasn’t easy and I knew it would be this way,” Talita said. “Everything seems very different to me now, but we were very patient with the process. We felt we were getting better at each tournament and that in the last ones we lost to some great teams due to very little details. I think that now we turned that corner and really figured out how to handle these key moments.”
It will be the sixth time the teams have met since Talita returned and Talita and Taiana have won four of the meetings, including twice each on the World Tour and the Brazilian national tour.
In a matchup of world champions - Agatha won in 2015 with Barbara Seixas - it will be the eighth time the Brazilians have matched up with the Canadians. Agatha and Duda have won five of the meetings, including the Warsaw Open event in June.
Both Agatha and Duda and Pavan and Humana-Parades are seeking their third gold medal of the year.
While three Brazilian teams in the final four is not uncommon, there may be a different reason this year rather than mere talent. As teams try to scoop up points in the qualification process for the Tokyo 2020 Olympics, the Brazil federation has chosen to select its two allotted teams (provided they qualify) in February. The rest of the world has until June.
“Crazy, no?” Agatha said. “We have good teams from Brazil so it’s not that difficult to happen, but we have our own ranking and our Olympic ranking will finish in February, so the teams need to have good results because we are finishing.
“But it’s always a hard game because Melissa and Sarah are the world champions, so imagine.”