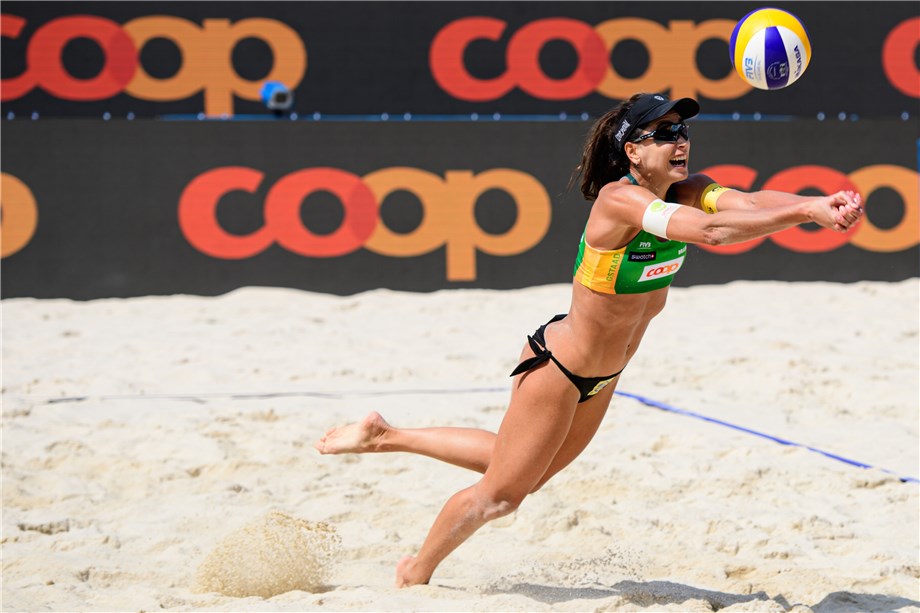 Stretching for the ball is Carolina Salgado, the second member of the Brazilian family to reach a FIVB World Tour semifinal in Gstaad 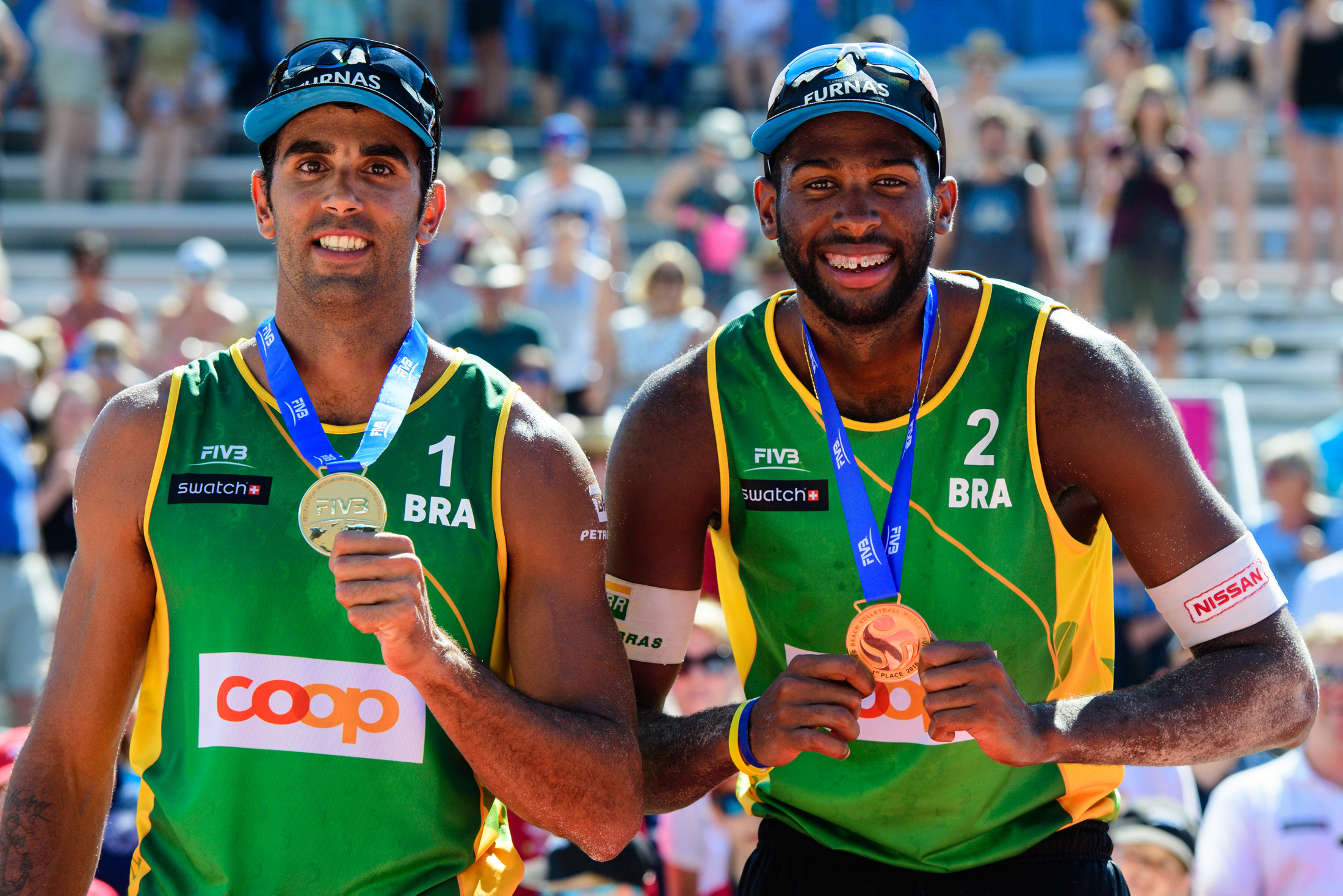 Pedro Solberg (left) and Evandro Goncalves of Brazil with their 2016 Gstaad gold medals
Carolina and Antonelli, who had to win a qualifying match Tuesday, posted the second women's quarterfinal win Saturday as the 15th-seeded Brazilians with a 2-0 (21-19, 21-19) victory in 42 minutes over ninth-seeded and reigning European champions Sanne Keizer/Madelein Meppelink of the Netherlands.
Prior to Saturday's advancement to the semifinals, Carolina had never finished higher than fifth as she and her old sister Maria Clara reached the quarterfinals in Gstaad at the 2007, 2008 and 2010 tournaments. 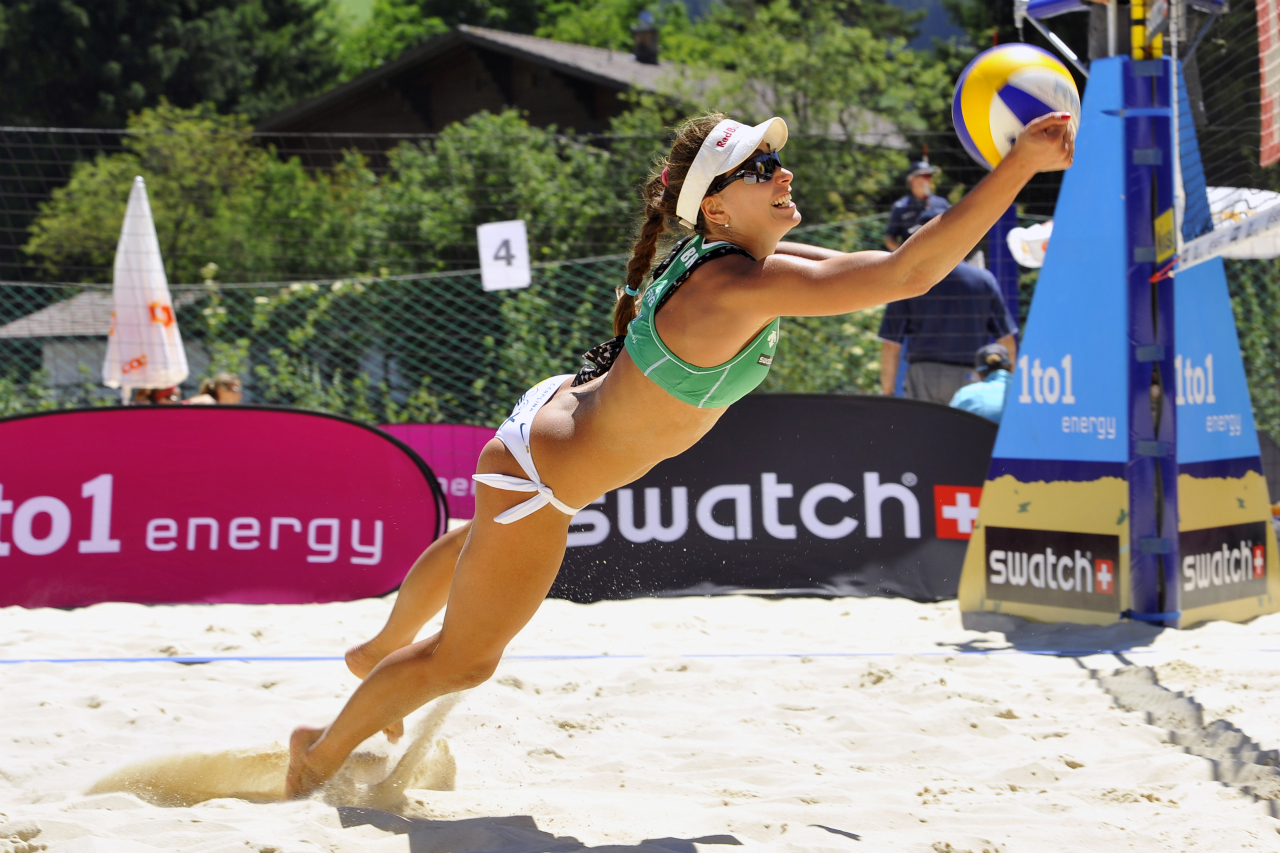 Diving for Mikasa at the 2010 Gstaad event is Maria Clara Salgado
Martin and Paul Laciga of Switzerland are the other brother combination to reach a Gstaad semifinal together placing second in the first men’s event in the village in 2001. German twins Marcus and Christoph Dieckmann earned a spot in the semifinals with different partners.
Markus Dieckmann and Jonas Reckermann placed second in both 2003 and 2004 in Gstaad with Christoph Dieckmann and Julius Brink gathering a bronze medal in 2006.
"That's great about being the first brother-sister tandem to reach the semis," said the 31-year old Carolina. "My sister and I had several chances to play for the medals, but it did not happen. That was disappointing, but that is in the past.  I am more focused on this week's event with Maria. We need a good result to improve our standing on the World Tour and Olympic rankings."
Entering this week's action Carolina and Antonelli are No. 10 in the World Tour rankings but are the third Brazilian team listed on the entry list behind compatriots No. 4 Rebecca Cavalcanti/Ana Patricia Silva and No. 5 Agatha Bednarczuk/Eduarda "Duda" Lisboa.
On the Olympic provisional ranking list as of July 8, Rebecca/Ana Patricia are No. 1, Agatha/Duda listed 11th and Carolina/Antonelli No. 13. With a guaranteed fourth-place finish this week, Carolina/Antonelli are now tied in points on the provisional ranking list with Agatha/Duda as both teams have 4,280 points.
A team's best 12 finishes are used in determining the 15 qualifiers for the Tokyo 2020 Olympic Games with a maximum of two teams per country allowed. Rebecca/Ana Patricia are the run-away leaders on the provisional list with 7,360 with 11 counting events. Despite being tied in points, Agatha/Duda have a slight edge as they have competed in seven events and Carolina/Antonelli are with eight appearances.
Qualifying for the Tokyo 2020 Summer Games continues through mid-June 2020. In addition to the 15 teams per gender from the World Tour with a maximum of two pairs per country, the 24-team field will also be made up of five tandems from the continental confederation pathway along with a host country pair, the 2019 world champions and two duos from this season's Olympic qualifier in China in September.