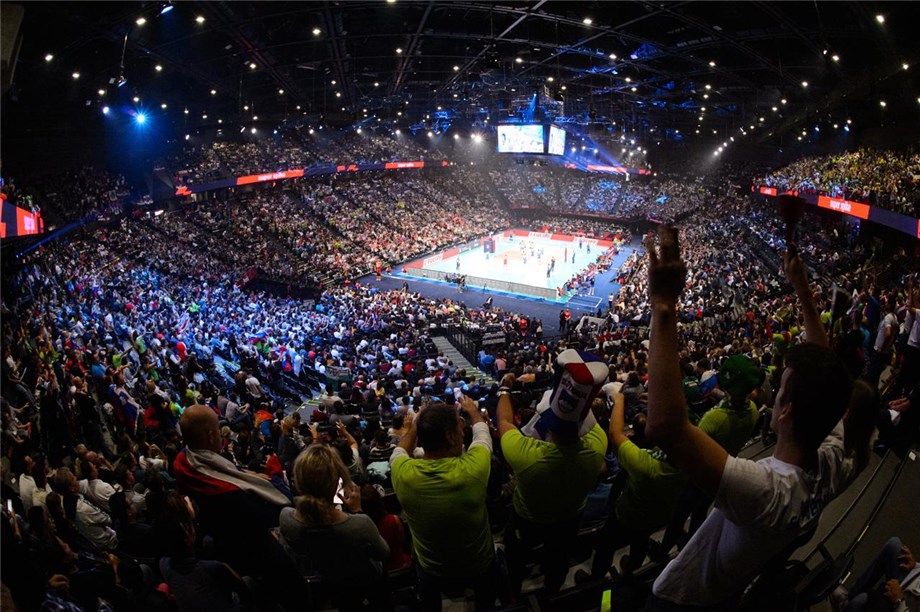 The European Volleyball Confederation has released a tentative new schedule for the qualifiers to the 2021 European Championships.

Luxembourg, June 29, 2020. After working extensively with all relevant stakeholders and holding dozens of videoconference calls, the European Volleyball Confederation (CEV) is able to release a tentative calendar for the EuroVolley 2021 qualifiers initially scheduled for late August and early September 2020.

As per the decision taken by the CEV Board of Administration back in April and further to the many restrictions still in place across Europe due to the coronavirus crisis, the CEV has shown much flexibility in liaising with National Federations, trying to find the most reasonable solutions while safeguarding the health and well-being of players, coaches and officials. The CEV will continue to monitor the evolution of the pandemic and as a result, this tentative calendar remains subject to further changes.

The main deviation from the initial programme relates to the competition format, with tournaments replacing the originally planned home and away matches in each pool in order to avoid extensive travelling for teams and officials at a time when governments continue to impose a number of restrictions in order to contain the spread of the disease.

The CEV hosted a number of videoconference calls over the past weeks with representatives of National Federations whose teams feature in the same pool, with a spirit of solidarity and mutual support at the very core of the decisions taken on a case-by-case basis.

Therefore, a small number of qualifiers will be taking place in the late summer of 2020, as long as conditions allow for their safe delivery, with most tournaments pushed back to early January 2021. A total of 12 teams per gender will qualify from those double round-robin tournaments to the EuroVolley Final Rounds scheduled for the late summer of next year. These 12 teams will join the four organisers and another eight teams already qualified as per the final standing of the 2019 edition.

The tentative calendar for the men's qualifiers reads as follows: 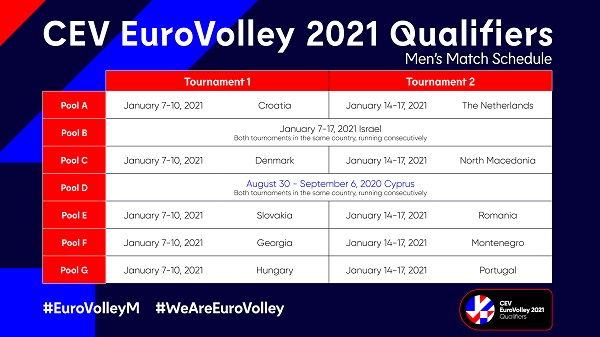 The winners of each pool plus the five runners-up with the best result across all pools will secure their ticket to the major Volleyball showdown co-hosted by Poland, Czech Republic, Estonia and Finland.

The tentative programme of the EuroVolley 2021 women's qualifiers currently looks as follows: 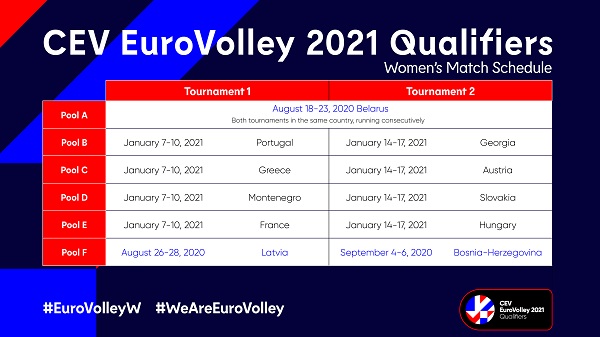 The six pool winners and the six runners-up will make it to EuroVolley 2021 Women due to take place in Serbia, Bulgaria, Croatia and Romania.

The CEV will continue to monitor the situation and the further development of the coronavirus pandemic, with further information due to follow in due course – as and if needed.