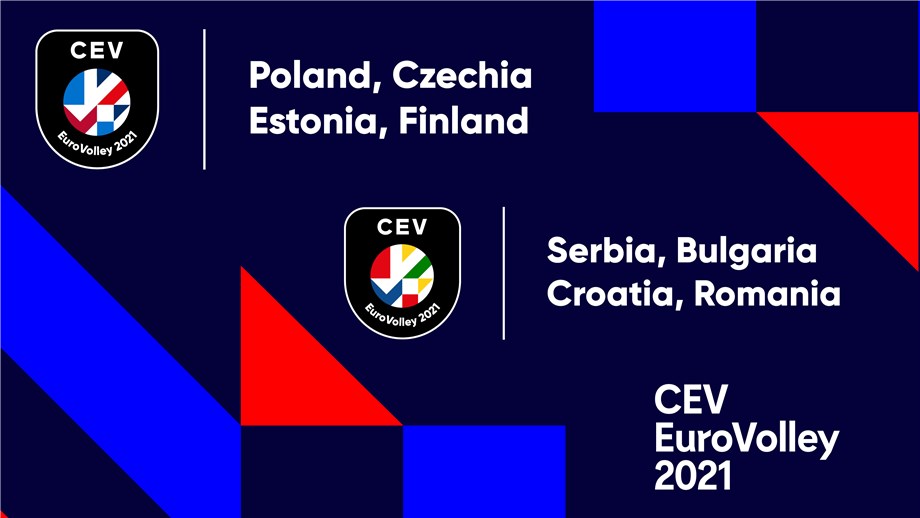 Luxembourg, June 19, 2020 -  The countdown to the European Volleyball Championships (EuroVolley) 2021 started earlier this afternoon, with the European Volleyball Confederation (CEV) releasing epic trailers for both the men’s and women’s editions, which showcased the iconic landmarks from each of the respective four host countries and ended with the grand reveal of the official competition logos.
Last year’s EuroVolley coincided with the beginning of a new era for European volleyball, with half a million people following the competition and enjoying the ‘ultimate volleyball party’ which featured the best European national teams in a truly mesmerising experience for players and fans alike.
The trailers provided a sense of the electrifying atmosphere awaiting fans travelling to the host countries of EuroVolley 2021 Men – Poland, Czech Republic, Estonia and Finland. Every single host nation has a large, knowledgeable, passionate and dedicated volleyball fanbase, ensuring that EuroVolley will be an unforgettable experience no matter the host nation you visit!
In addition, the countries due to host the women’s competition all have an extensive and successful history in the sport of volleyball, and include: Serbia, Bulgaria, Croatia, and Romania. There is no doubt that the organisers and local supporters will ensure that EuroVolley 2021 Women is an incredible and engaging event.
To continue with a tradition that started with EuroVolley 2019, the official competition logos display the national colours of the respective four host nations. The logos also reflect the CEV’s commitment to deliver a young, innovative and dynamic experience, with fans and their experience at the very core of the event.
To celebrate the logo unveiling and engage with the fans, the CEV organised a Facebook live session featuring a variety of volleyball superstars, such as Tijana Boskovic, Eda Erdem, Cansu Özbay, Anne Buijs, Klemen Cebulj, Jan Kozamernik, Sam Deroo and Barthélémy Chinenyeze. During the live session, the athletes shared their previous EuroVolley experiences and their expectations ahead of EuroVolley 2021.
The CEV will confirm the respective competition dates in each host city at a later stage.