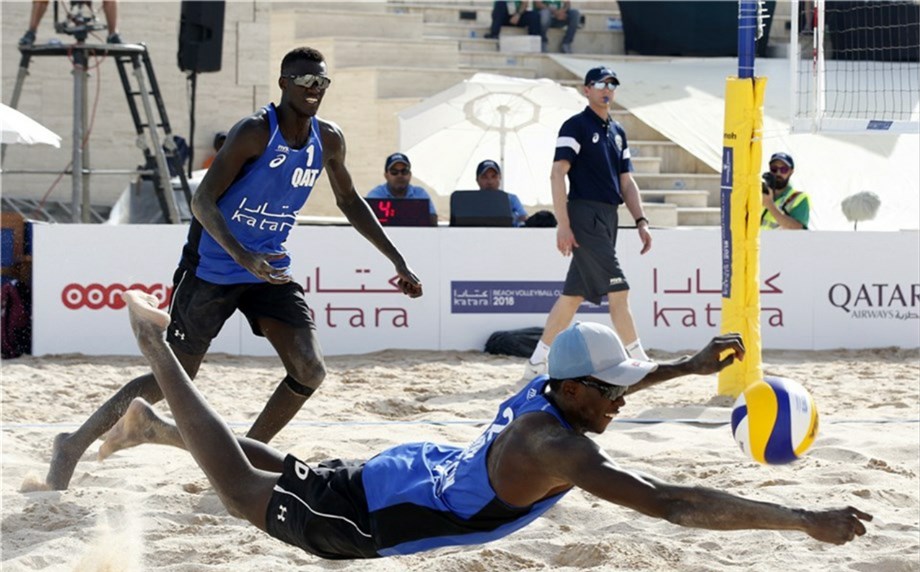 Lausanne, Switzerland, March 11, 2019 – Cherif Younousse and Ahmed Tijan will be out to claim more hometown glory when they return to FIVB Beach Volleyball World Tour action at the 4-Star Katara Beach Open in Doha, Qatar this week.
Qatar’s leading pair are ranked ninth for the tournament that runs from March 12-16 and which will take place at the Katara Cultural Village for the second year in a row. It will be the fifth time that the Qatari capital has hosted a World Tour event since it first played host in 2014.

Quick links - Beach volleyball:
FIVB Beach Volleyball World Tour - Doha
FIVB.com - Beach volleyball
Facebook
Twitter
Instagram
In 2018 Cherif and Ahmed won their first World Tour medal with bronze. Later in 2018 they won bronze at the Vienna 5-Star and gold at the AVC Asian Beach Volleyball Championships.
Alexander Brouwer and Robert Meeuwsen return to Doha to defend the gold they won in 2018, and the Dutch pair have been seeded seventh.
Brouwer and Meeuwsen, world champions in 2013, are chasing their first World Tour medals since they won gold at the 1-Star Aalsmeer tournament that came a week after the 2018 Katara Open. They began the year with a quarterfinal finish at The Hague 4-Star in the first week of January and Doha will be their first tournament since then.
Brazil have two new teams competing following another change to their line-ups.
Rio de Janeiro 2016 Olympic Games gold medallist and Netherlands 2015 world champion Bruno Schmidt will compete alongside Austria 2017 world champion Evandro Goncalves for the first time. Meanwhile their most recent partners, Pedro Solberg and Vitor Felipe, will also make their World Tour debut as a pairing.
Phil Dalhausser and Nick Lucena are seeded first and while the Americans finished outside the medals with fourth place in 2018, they have good memories of competing in Doha having won silver there in 2015 which helped them in their late run to qualify for Rio 2016.