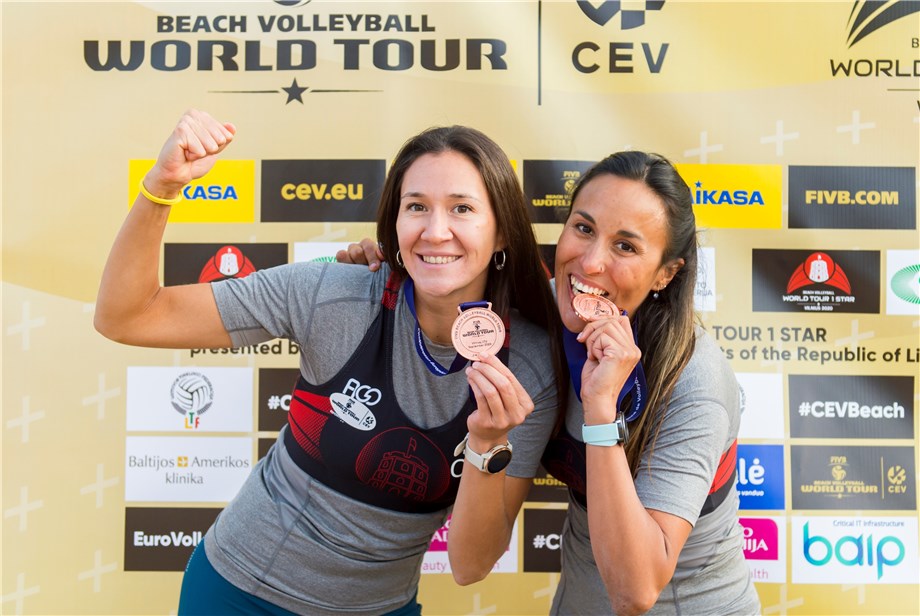 Santiago, Chile, September 17, 2020 – After earning their spot in the men's beach volleyball elite over the last decade, Chile made a significant step towards accomplishing the same among the women last weekend when the country won its first-ever FIVB Beach Volleyball World Tour medal with a female team.
The historical result arrived in Vilnius, Lithuania, where 32-year-old Francisca Rivas and 30-year-old Chris Vorpahl fell to eventual winners, Italians Margherita Bianchin and Claudia Scampoli, in the semifinals, but bounced back with a victory over the home team of Ieva Dumbauskaite and Karole Virbickaite to take bronze and become the first Chilean women to step on a World Tour podium.
“It was the day we’ve been waiting for for a long time,” Rivas said in an interview with the Chilean Volleyball Federation website. “We’re very happy about the work the entire national team has been doing, not only us, but also the other teams that played in the tournament (Pilar Mardones and Paula Vallejos, who finished fifth) and the younger athletes back home. We’re very fortunate to have this opportunity and we’re doing our best to repay the country’s confidence in us.”
The hope among the players is that the historical result achieved in Lithuania helps improve the country’s participation at the international level and, in the long-term, pushes the South American nation to a position in which one of its women's teams gets the same finishes the Grimalt cousins Marco and Esteban have been achieving over the last seven years.
Currently the country has only 19 female players with World Tour experience, with Rivas, a three-time Pan-American Games participant being the most seasoned of them with 13 events under her belt. Vorpahl, on the other hand, played in a World Tour event for the first time in Lithuania.
“We’re very excited about this result,” Vorpahl added. “It didn’t happen by  chance, it was a goal we had set and we worked for it. We’re always looking for more, but to see that we’re headed in a good direction is very reassuring. We’ll keep working to take Chile even further.”
More beach volleyball from Chile:
Grimalts making the most of their Euro trip
Marco and Esteban Grimalt on their plans
Team of the Week: Marco and Esteban Grimalt
Esteban Grimalt's unique journey
Quick links:
FIVB Beach Volleyball World Tour - Vilnius 1-star
FIVB Beach Volleyball World Tour
Olympic Games Tokyo 2020
Facebook
Twitter
Instagram
Youtube