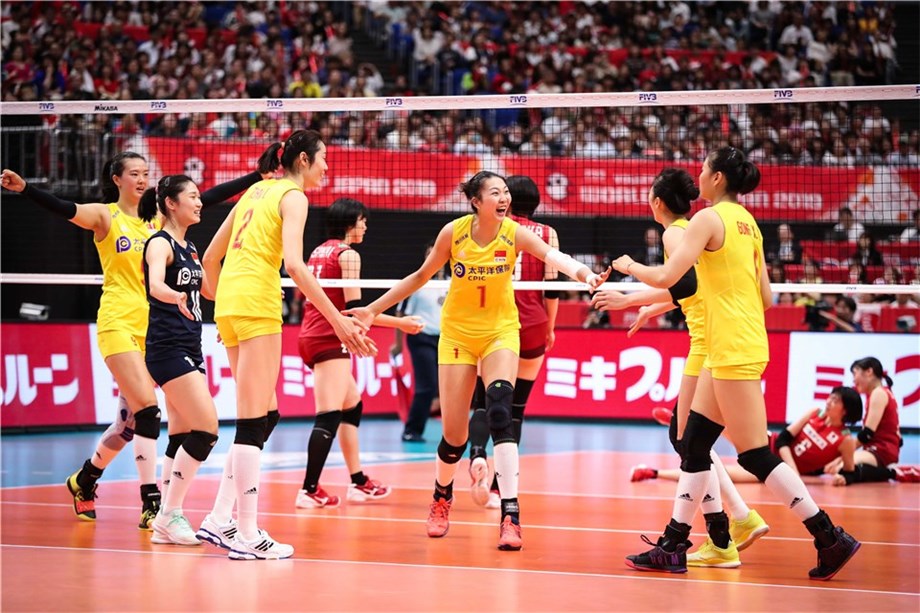 Yokohama and Hamamatsu, Japan, September 19, 2019 – The first round of matches at the FIVB Volleyball Women’s World Cup was completed on Thursday evening, with China, USA and Russia taking the top three spots in the standings.
In the last match of the day, China defeated hosts Japan, 3-0 (25-17, 25-10, 25-17) in front of a sold-out crowd at the Yokohama Arena to claim their fifth consecutive victory. The Chinese passing unit performed well, which enabled setter Ding Xia to run her plays with success. China also benefitted from their height advantage, gaining amply from their well-organised blocks. The Olympic champions even performed well from the service line, as Zhang Changning delivered 3 consecutive aces towards the end of the second set.
Japan needed to reach deep within their bag of strategies to address their opponent’s rapid plays. The hosts, with their patented defence, endeavoured to sustain rallies, and emerged at times with the point. However, China amplified their play even more with good counter-attack measures which helped to diffuse Japan’s strategies.
Zhang Changning (19 points) and captain Zhu Ting (14 points) helped maintain China’s unbeaten run.

USA likewise picked up their fifth win, claiming a 3-0 (25-22, 25-18, 25-19) victory over Brazil.
The Americans executed their game plan well, and the Brazilians struggled to establish their usual tempo. USA Setter Jordyn Poulter led a well-distributed offence, enabling most of her hitters to convert with double-digits. USA also proved their versatility, switching comfortably from offence to defence and back in transition. 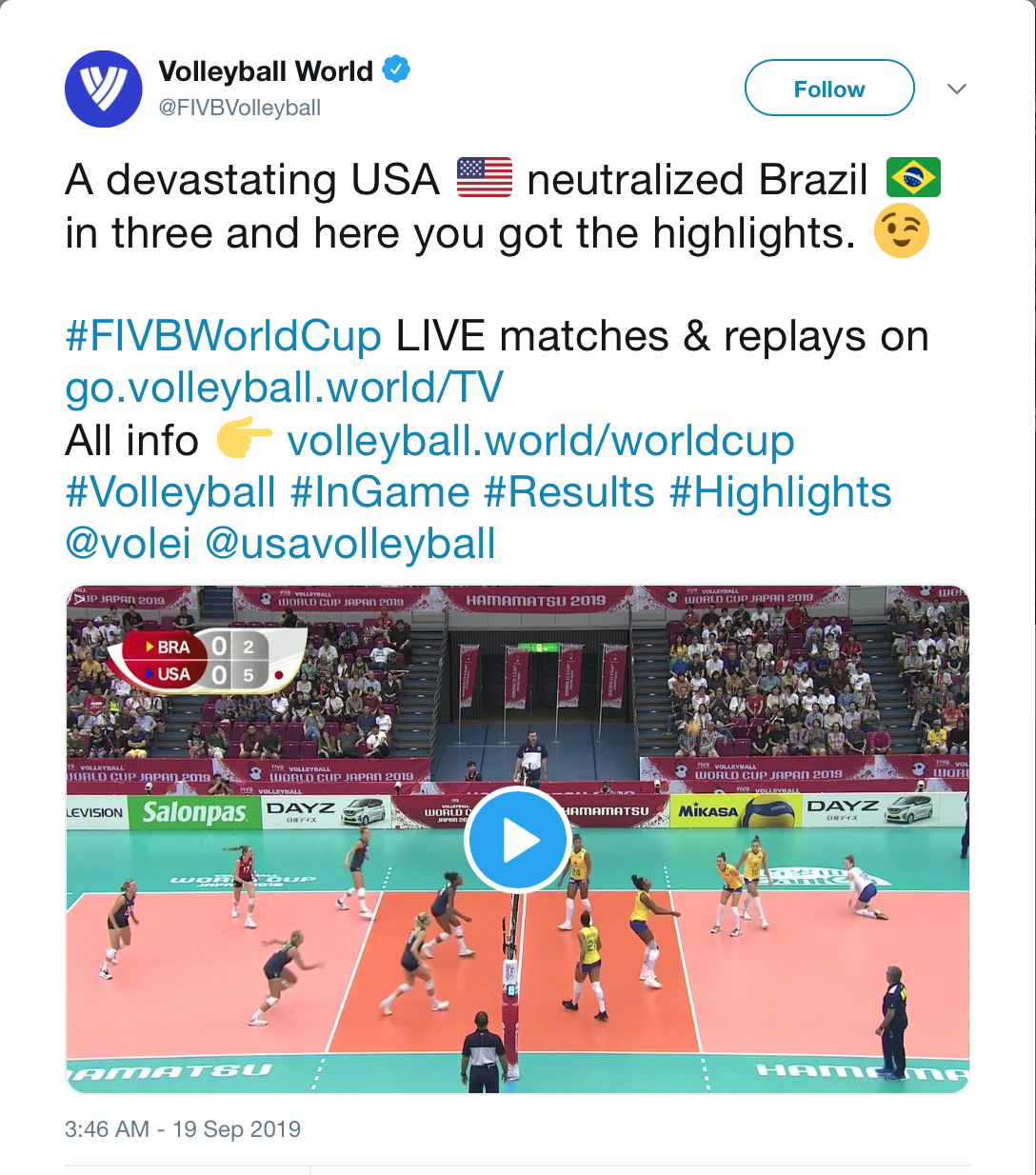 “I’m really happy that I can help the team and show myself because in the national team, the best in this position is Tijana Boskovic, and now that I have this time and chance to play, I really try my best all the time,” shared Bjelica.
Playmaker Sladjana Mirkovic ran the Serbia show in the fifth set, making all the right decisions in pacing their offence.
“After that (the first and second sets) we finally got the chance to play our own game, and they (Netherlands) could not stop us anymore,” said Mirkovic.
“Let’s win this! That was the mentality,” she added.
Win they did, taking their third triumph in five outings.
The Dominican Republic wanted the same result as they forced the decider, but later fell to defeat against Russia, 3-2 (25-16, 25-23, 23-25, 23-25, 15-5). The European side settled into the third spot with a 4-1 card.
The Russians initially dominated in attack and block, but played complacently following their 2-0 advantage. The Dominicans seized momentum, with Bethania Dela Cruz and Brayelin Martinez on attack. By the tie-break, the Russians reverted to their strong blocking game and utilised the hot spiking hands of Nataliya Goncharova (26 points) and Kseniia Parubets (22 points). 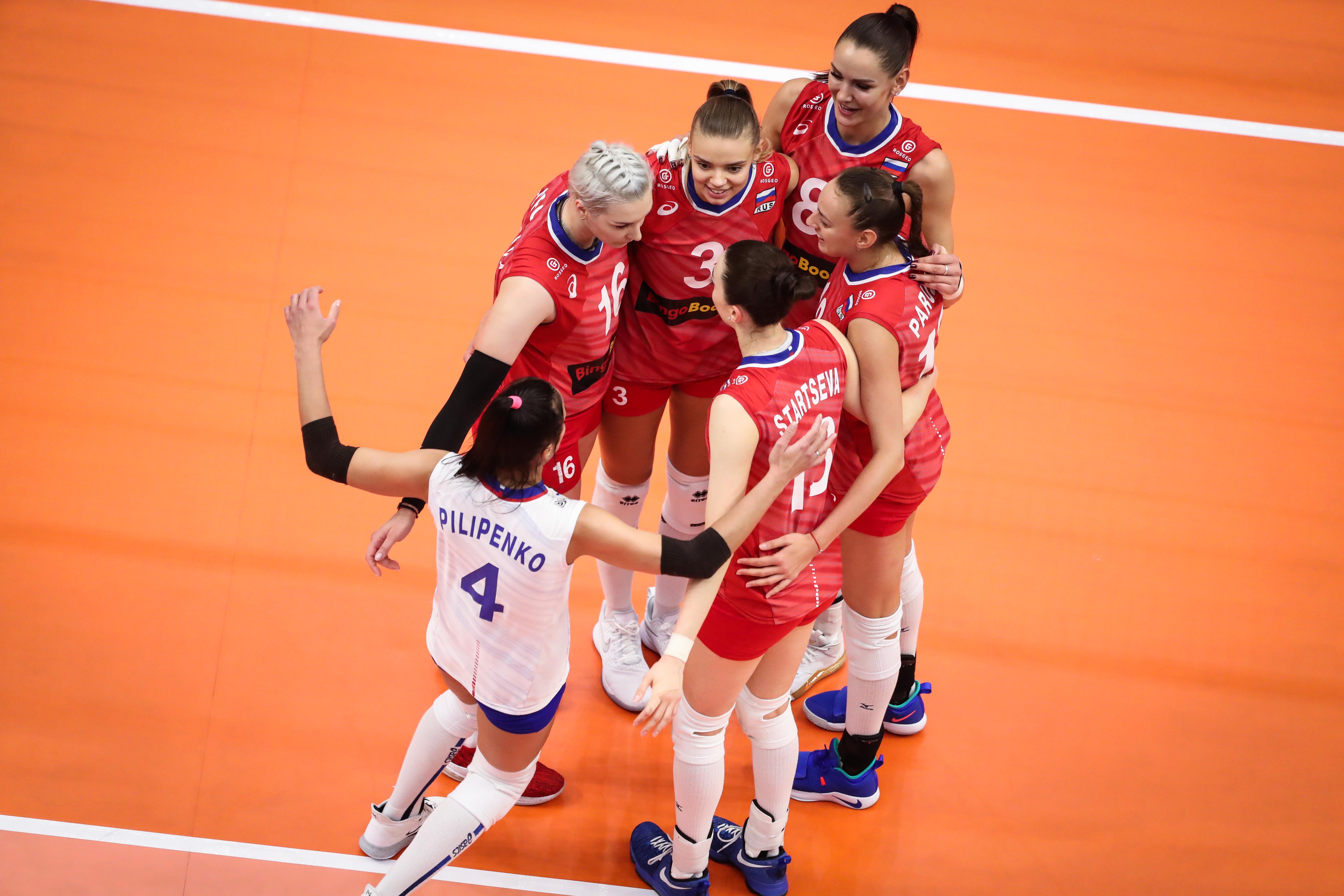 Russia were able to defend well against a Dominican Republic comeback

Later, Korea defeated Cameroon 3-0 (25-21, 25-18, 25-18) in Site A Yokohama, while Argentina celebrated their first win, taking straight sets on Kenya, 3-0 (25-14, 25-19, 25-15) in Site B Hamamatsu.
Competition resumes on Sunday, September 22, with Site A moving to Sapporo and Site B travelling to Toyama. The twelve teams then converge in Osaka for the final stop of the 2019 edition.
Quick links - Volleyball:
FIVB Volleyball Women's World Cup
Facebook
Twitter
Instagram
Youtube