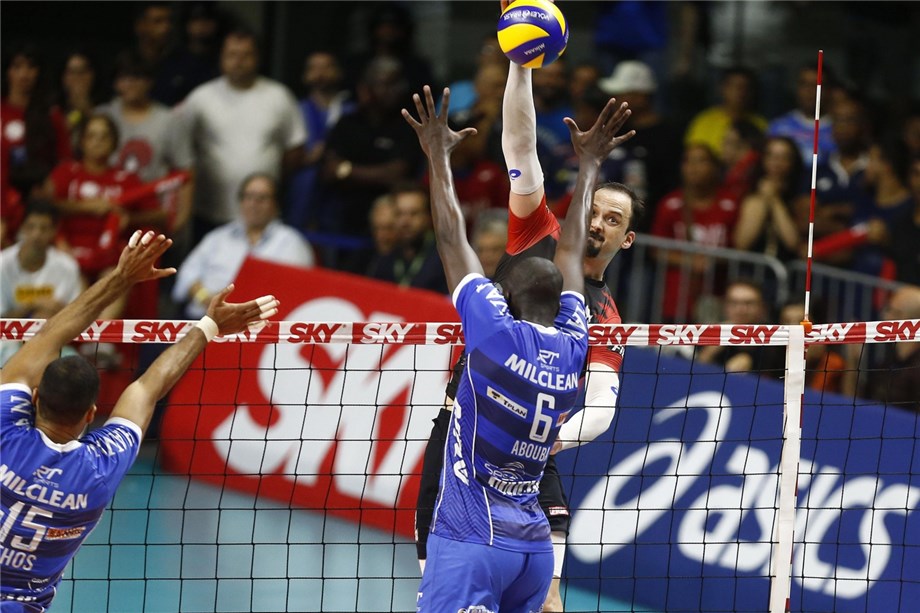 Lipe tries to beat the block of Aboubacar Neto as he helps Sesi Sao Paulo beat Funvic Taubate and extend the final series of the Brazilian Superleague to a fifth and last game.

Lausanne, Switzerland, May 6, 2019 - The men's national leagues final series in Brazil and Italy have been extended as the finalists continue to battle for the crowns, just about three weeks now ahead of their star players joining their national teams for the 2019 FIVB Volleyball Nations League.

But the season is all wrapped up in Poland, where Zaksa Kedzierzyn-Kozle won their eighth national title after only three matches in the best-of-five final series against Onico Warsaw. Rafael Szymura was named MVP of the deciding third game, leading Zaksa to a 3-1 (25-22, 19-25, 32-30, 25-19) win with three players scoring in double digits: Lukasz Kaczmarek 12, Szymura 11 and Mateusz Bieniek 10. Maciej Muzaj was top scorer of the game with 22 points for Warsaw.

Alan Souza led the scoring for Sesi with 19 points with Luis Felipe 'Lipe' Fonteles adding another 15 to counter the match-high of 20 points and Ricardo Lucarelli and 18 of Argentina's Facundo Conte for Taubate.

• And in Italy, Cucine Lube Civitanova have tied the best-of-five final series of the Superleague at 1-1 after downing Sir Safety Conad Perugia 3-1 (25-19, 22-25, 25-22, 25-19), led by Yoandy Leal who scored 20 points. Wilfredo Leon was top scorer of the game with 21 points for Perugia.
• In Greece, Olympiacos Piraeus have taken an early lead over PAOK Thessaloniki in the best-of-five final series with a 3-0 (25-22, 25-22, 25-21) win inspired by their best scorer Gavin Schmitt of Canada on 16 points and marked by the return of Bulgaria's Todor Aleksiev. Serbia's Aleksandar Okolic scored a match high of 17 points for PAOK. The next game is on Monday evening.

• In women's action during the week, Dinamo Moscow claimed the Russian Superleague title, overcoming Lokomotiv Kaliningrad in the final series.
• In Turkey, VakifBank retained the Turkish League title with a sweep of Eczacibasi VitrA in the fifth and deciding match of the all-Istanbul final series.
• In the Italian A1 League, Imoco Volley Conegliano have come within one win of the title, after gaining a 2-0 lead in the best-of-five final series over Igor Gorgonzola Novara. The Netherlands' Robin de Kruijf was Conegliano's top scorer in the first game with 14 points in their 3-0 (25-15, 25-20, 25-15) win and Miriam Sylla led the side with 13 points in the second game's 3-0 (25-16, 25-23, 25-23) win. Paola Egonu led Novara on both occasions with 14 and 19 points respectively. The third match in the series, which could decide the title, is Monday evening.
• LKS Commercecon Lodz won their first Polish Women's League title in 36 years, after sweeping the best-of-five final series against Grot Budowlani Lodz in just three matches. MVP of the game Klaudia Alagierska led the LKS in their 3-2 (25-10, 16-25, 25-22, 23-25, 15-9) win in the third match, with Brazil's Regiane Bidias leading the scoring on 24 points. Serbia's Jovana Brakocevic was top scorer of the game with 33 points for Budowlani.
• And in Asia, Bohai Bank of Tianjin dethroned Thailand's Supreme Chonburi to claim the Asian Women's Club Championship title.